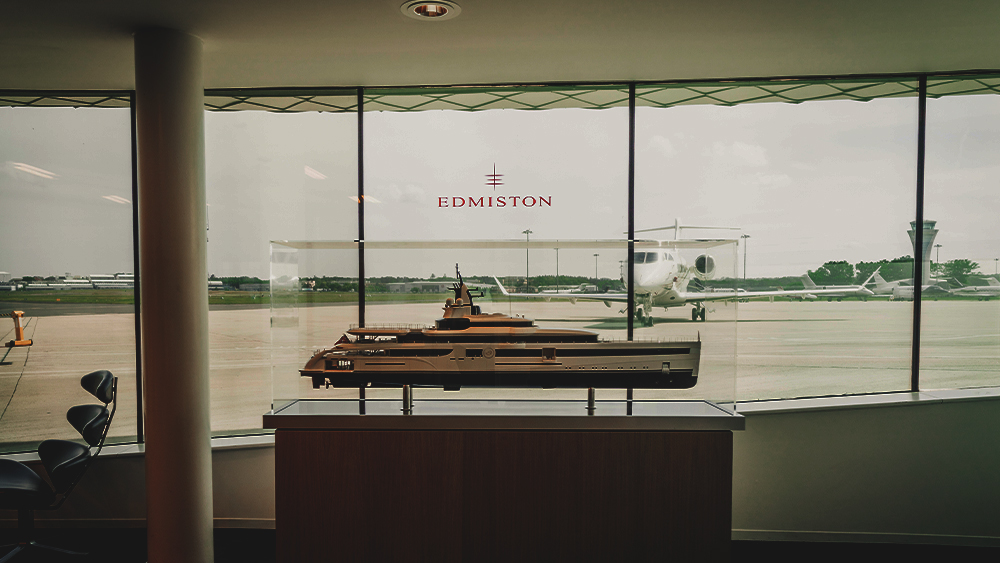 Superyachts and private jets may seem like common denominators for the uber-wealthy. After all, every 350-foot gigayacht requires a matching helicopter, right?

But that circle is so finite that it ignores the tens of thousands of millionaires who routinely travel by private jet, but have nothing to do with the yachting world.

Edmiston Yachts in London is attempting to change that with a new lounge it recently established at Farnborough, the UK’s only airport devoted solely to private aviation. The white-and-red room, with custom furniture and rich fabrics, exudes a classy nautical theme, with images of superyachts and yacht models in glass cases overlooking the runway. The effect is set off by the company’s signature bold red beneath a slatted white divider that conveys a wave image.

That neatly echoes the organic-looking wave-form hangars that have been used as backdrops in movies such as the James Bond film Quantum of Solace and the sci-fi blockbuster Inception.

Those watery allusions also echo Edmiston’s first branding venture in aviation. In 2019, it sponsored central London’s only fully licensed heliport, jutting out into the Thames in Battersea, complete with its logo in corporate red on the exterior and landing area.

CEO Jamie Edmiston told Robb Report that the company entered into sponsorship deals with Farnborough and the heliport because of the growth of helicopters in the superyacht segment. “Yachts with helicopters were very rare 15 years ago,” says Edmiston. “Now any new yacht over 230 feet will have a helipad. And any vessel over 328 feet is likely to have a helicopter hangar.”

This coincides with the growth of available money as the rich grow richer—assets of the world’s wealthiest individuals are set to double by 2030, according to a recent report by consulting group Bain and Company.

Edmiston itself has sold 60 yachts longer than 100 feet in the last 18 months, while boasting a 30-percent share of the global market for 328-ft.-plus yachts.

The asset-rich are increasingly focusing on the limitations of time, which make helicopters ideal tenders for ferrying owners and charterers out to their yachts. The same thinking makes private jets a natural solution for taking yacht users to where their vessels are—often the Mediterranean in the summer and Caribbean in the winter.

In the wake of the pandemic, says Alex Holden, Edmiston strategy director, “More people are using private jets as a means of transport.” For those people new to the industry, “Battersea and Farnborough are a way to create a physical representation of the brand,” he says.

Edmiston’s theory is that sponsored lounges such as that at Farnborough and another in Mexico help target the right audience. Holden says the number of inquiries as a direct result has so far been small, though each has turned into a sale. Edmiston is already planning a third similar sponsorship, probably on the US West Coast.

And while long-term details of the Farnborough deal are still being ironed out, Edmiston says each person reached is a win for the industry. “When you discover yachting, you don’t leave,” he says.