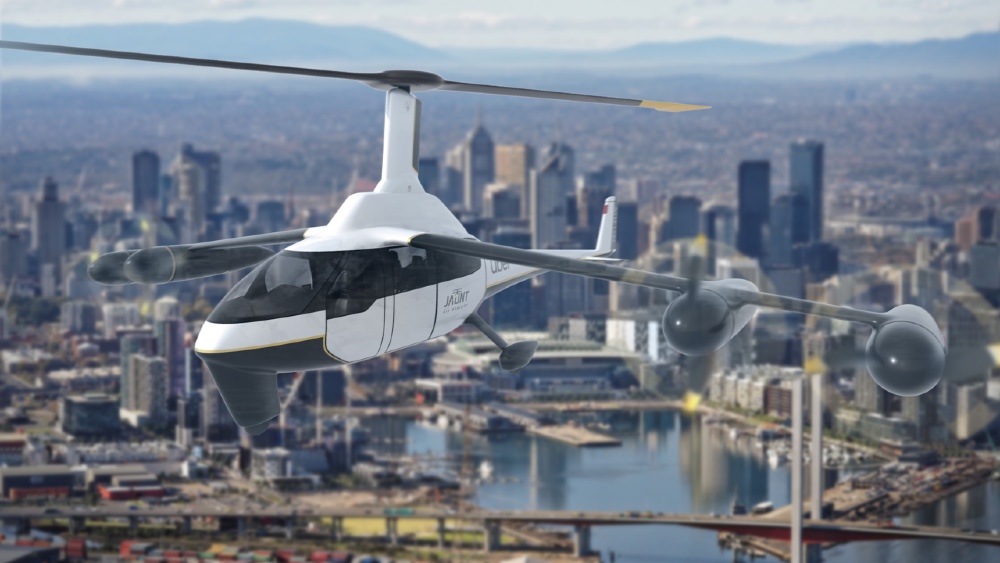 With Uber Elevate’s announcement that it plans to start its first urban air mobility network in 2023, the electric vertical takeoff and landing (eVTOL) race is on. Uber’s partnership with Joby is big news, as is Joby’s electric four-person aircraft, but Jaunt Air Mobility could be an equally important partner.

Jaunt has introduced the Journey, a radically different type of “compound aircraft” that combines what it sees as the best features of helicopters and fixed-wing airplanes. Technically, it’s called a gyrocopter, an aircraft type that has been around since the mid-‘30s.

But the Jaunt Journey is a very advanced version of the gyrocopter, with breakthroughs made possible by its electric motors.

Designed to cruise at 175 mph with a single pilot and four passengers, the Journey is quiet, safe, and highly efficient. It is not an airplane, though it flies like one. It’s also not strictly a helicopter (Jaunt says it will be 63 percent quieter than traditional choppers) but behaves like one on takeoffs and landings. It will also be classified as a rotorcraft. And it’s 100 percent electric.

“We can guarantee that you will never spill your martini when riding in a Jaunt Journey because it takes off vertically, transitions to fly like a plane and then lands vertically,” Kaydon Stanzione, CEO of Jaunt Air Mobility told Robb Report. “It’s LevelFly all the way.”

Designed for an unusually smooth ride, the Jaunt Journey promises to be a leading eVTOL in the air-taxi market. It recently signed a partnership agreement with Uber Elevate to be included in its UAM fleet.  Jaunt Air Mobility

As a rule, gyrocopters tend to tilt forward while taking off and then backwards when landing. This means everything needs to be secured upon takeoff and landings.  Jaunt has eliminated that with its “LevelFly” solution that nullifies the gyrocopter effect. The mast tilts forward and backward so that the cabin stays level at all times. As Jaunt likes to say, laptops won’t go flying on their own during takeoffs and landings.

The Jaunt also uses what the company calls Reduced Rotor Operating Speed Aircraft (ROSA) technology. This technology reduces the rotor speed in cruise mode for a quieter flight. This will help it meet noise regulations for residential communities. Its electric engines also do not require combustible liquids for fuel, and produce zero emissions.

Jaunt is currently working with BAE Systems on electrical power systems. The company expects FAA certification will begin by 2023 for the Journey and be achieved by 2025. Its demonstrators have flown 100-plus hours, with more than 1,000 takeoffs and landings.