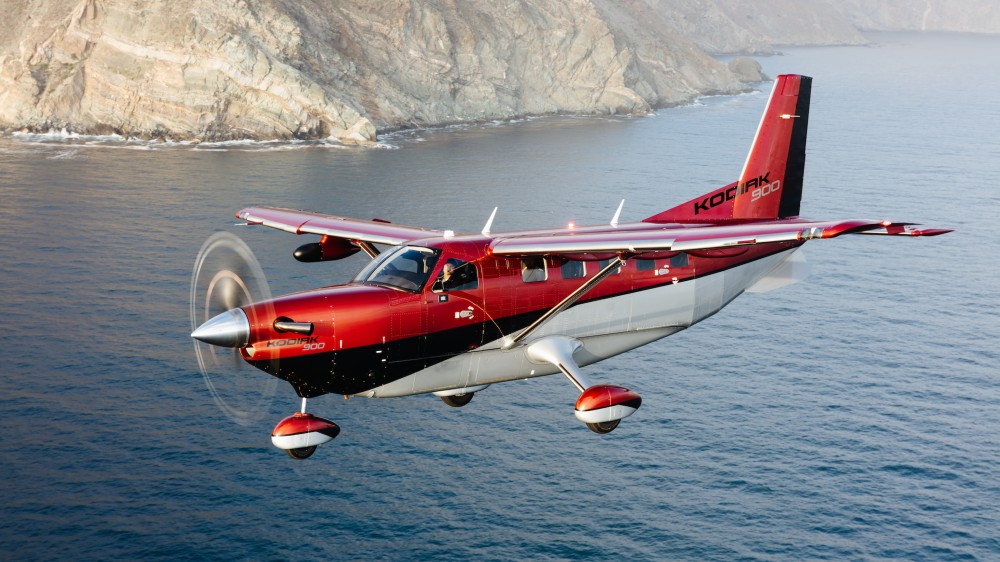 Kodiak introduced a new flagship today at EAA AirVenture Osh Kosh. The Kodiak 900, which the company describes as a luxury SUV for the air, is a generational shift from its Kodiak 100, launched in 2007. The 100 is expected to remain the best-seller of the brand, owned by French aircraft manufacturer Daher—so much so that Kodiak recently introduced an updated series 3 model.

But the Idaho-based manufacturer sees the 900 appealing to a new, more upscale market.

“Most of the people who will want a Kodiak 900 will already have a Gulfstream or something close to it,” Mark Brown, director of sales and marketing, and chief demo pilot at Kodiak, told Robb Report. “This plane is for shorter hops. So let’s say, if you lived in Palm Beach, you would take the private jet to Europe. But if you wanted to go to your island in the Bahamas, and land your plane on a 1,500-foot runway, you’d take the 900 and be there in under an hour. It is really just a very easy way to travel.”

This aircraft, with bush-plane DNA, is a larger, more technically advanced version of the Kodiak 100. The company wants you to think of it as an airborne luxury SUV.  Courtesy Kodiak

Kodiak’s roots are modern-day bush aircraft, according to Brown. In the early 2000s many less developed countries needed a plane that could run on jet fuel, but also land and take off from anywhere—including the water. Kodiak filled that void with the 100, which initially enjoyed popularity among governments and humanitarian nonprofits. Within a few years it was recognized by the high-net-worth community for its off-grid, go-anywhere capabilities The 100 soon became a staple in private fleets.

As the next generation, the 900’s upgrades lift it into a new category. The single-prop engine saw a bump in horsepower from 750hp by using a 900hp Pratt Whitney PT6A-140 that delivers a cruise speed of 210 knots. Its maximum cruise range is 1,129 nautical miles, flying at 156 ktas at 12,000 feet. At slower speeds, it has a maximum flight time of 9.2 hours.

The 900, apart from a longer, more aerodynamic design, has a redesigned cockpit with advanced safety features.  Courtesy Kodiak

The 900 is 37 inches longer than its predecessor, which translates into a larger cabin with more internal comfort. The rear exterior cargo pod and internal space offer the ability to haul heavy loads onto short, narrow runways. For the new nomad, that means the 900 can hold up to 10 passengers, as well as the skis, surfboards or fly-fishing gear that the adventure requires.

The aircraft is also noteworthy for having modular seating as part of Kodiak’s Summit + interior. The seats can be positioned in multiple directions. Upgraded ventilation, heating and cooling systems were also added to the 900, since the plane can climb to 25,000 feet despite having a non-pressurized cabin. The cockpit layout has been redesigned with ergonomics in mind, and is customizable. Garmin’s G1000 NXi displays and newly relocated GFC 700 autopilot make for easier and more intuitive flying. Kodiak has also added safety features like WireAware and 3-D audio to increase the pilot’s situational awareness.

One of the benefits of larger interior are new modular seating that can be reconfigured for different flight missions.  Courtesy Kodiak

Kodiak added sound dampening to the cabin. A five-blade propeller is built with new composites that allow it to operate at lower RPM, so it runs with less noise and vibration. “This airplane can fly all over the world—even in Germany, where the noise pollution laws are incredibly strict—and it will pass anyone’s standards,” says Brown.

The new Kodiak, adds Brown, can operate from about $300 to $400 per hour, or about a fourth of the costs of a helicopter undertaking similar journeys. But the 900’s real beauty is that it also has the range to fly to—and the short-field capabilities to take off and land—in many more places than most other aircraft.