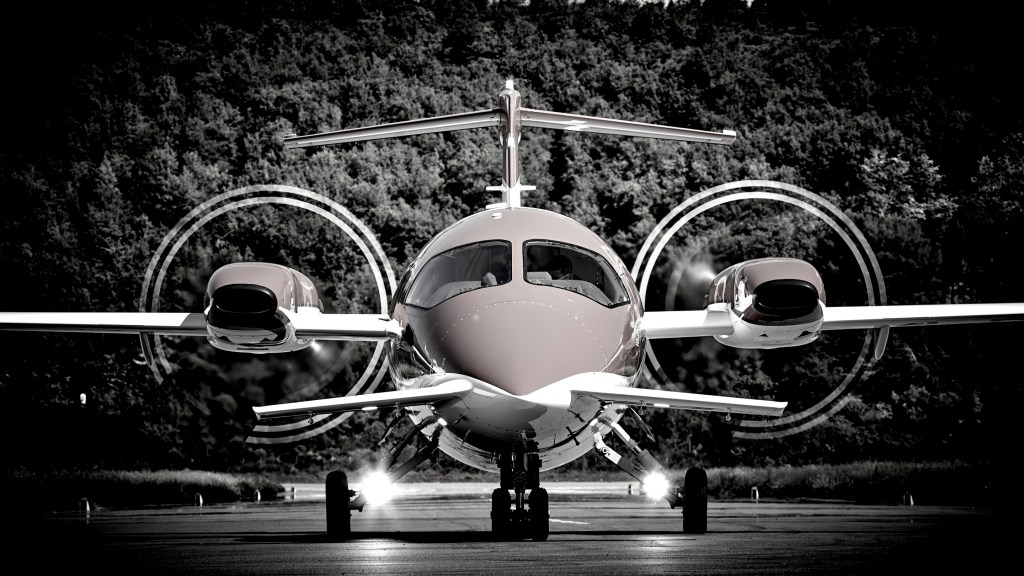 The newest edition of the Avanti P.180 twin turboprop, made in Italy by Piaggio Aerospace, now is flying in the United States, with a recent delivery to West Coast Aviation Services, at John Wayne Airport in Orange County, California. The P.180 is known for its unique aerodynamic performance, based on its three-lifting-surface configuration. The main wing is placed near the rear of the fuselage, while a second, smaller wing at the nose, known as a canard, provides extra lift and efficiency. A wing mounted on the tail provides the third lifting surface. Combined with the powerful turboprop engines, the aerodynamic boost adds up to more efficiency in flight, less fuel burn, and lower operating costs per hour compared to traditional aircraft of similar size.

Evo, the third generation of the P.180 design, is updated with five-blade scimitar propellers that boost performance, new cabin layout options, and added safety systems. The airplane is quieter and more fuel-efficient than earlier versions, and the service and support network has improved, the company says. With a ceiling at 5 feet 9 inches, the custom interior feels roomy for eight in VIP seating, with new leather seats by Iacobucci that recline and rotate fully, plus plenty of fold-down tables, adjustable lighting, connectivity, and baggage space. Low noise levels and a cabin altitude of just 6,600 feet help minimize passenger fatigue. Evo cruises at speeds up to 463 mph for more than 1,900 miles.

West Coast Aviation Services says it plans to add at least four more Evos to its fleet, and will use them for both charter and fractional ownership programs. The airplane sells for about $7.7 million. (piaggioaerospace.it, wcas.aero)