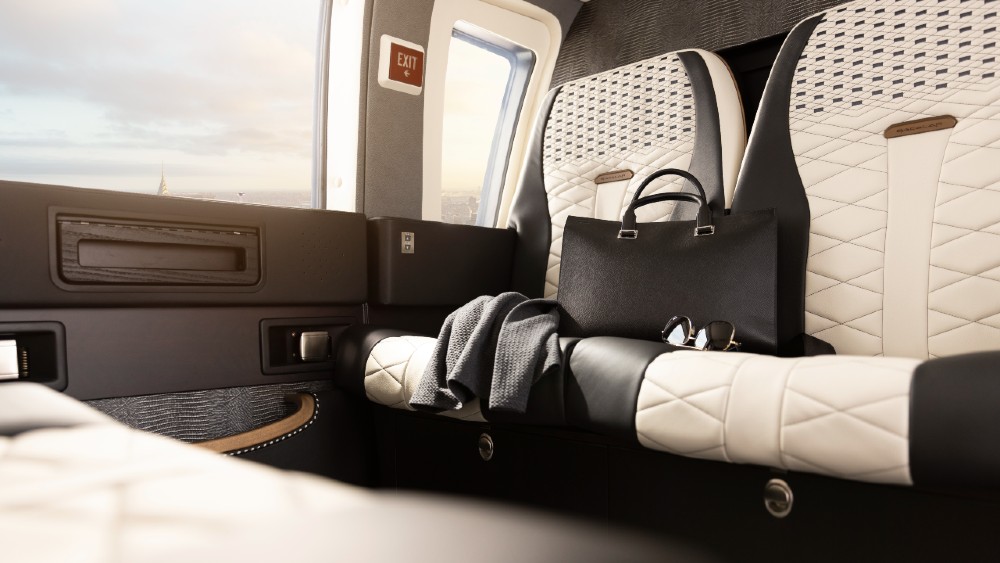 Do you want the Aston Martin DB11 interior or the Bentley Bacalar in your whirlybird?

Before, the only option was the Aston Martin, but now there’s a Bentley in the air.

Next weekend, Flexjet is showcasing its new Sikorsky S-76 helicopter with an interior inspired by the Bentley Mulliner Bacalar. The fractional air provider chose the Bacalar because Bentley only manufactured 12 of these open-air performance cars, with a different interior for each. Flexjet also has a matching Bentley interior on one of its Gulfstream G650s.

The S-76’s interior has the same intricate patterns in the seats as the Bentley.  Courtesy Flexjet

The company will be displaying the S-76 at The Quail, a Motorsports Gathering on August 19th at the Quail Lodge and Golf Club. It’s part of a marketing move to get Flexjet’s new private helicopter division in front of what it sees as the right audience.

Flexjet launched its helicopter division for “last-mile” connections between private airports to final destinations like Midtown Manhattan. It will have seasonal locations of its helicopters in the Northeast and Florida.

The design team went all out with interior details like a wood veneer that matches the 5,000-year-old river wood used on the console of the Bacalar, and a silver-green chameleon color for the livery that replaces the typical Flexjet red-gold chameleon paint. The copperhead shape of the Bacalar’s white-leather seating also inspired the captain’s seats on the S-76 and Gulfstream G650.

CEO Michael Silvestro said the Bacalar interior and livery colors will only be used on one S-76 and one G650.

The leatherwork on the Aston Martin ACH130 was inspired by its DB11.  Courtesy ACH

Flexjet is not the only aviation firm with a luxury car connection. Aston Martin and Airbus Corporate Helicopters (ACH) have been working together for three years on an DB11-inspired ACH130 helicopter. The first was delivered to a North American client this year. The special edition is available in four interior and exterior designs.

The seats and doors are upholstered in supple leather, with coordinating ultra-suede covering the rest of the cabin. The rear of each front seat also has the same brogue detailing in the DB11. The ACH130’s liveries also have gradient paint, with a contrasting underbelly, to give it ramp appeal, even on takeoff. The concept was so popular that the first series of 15 sold out, so a second series is now in the works.