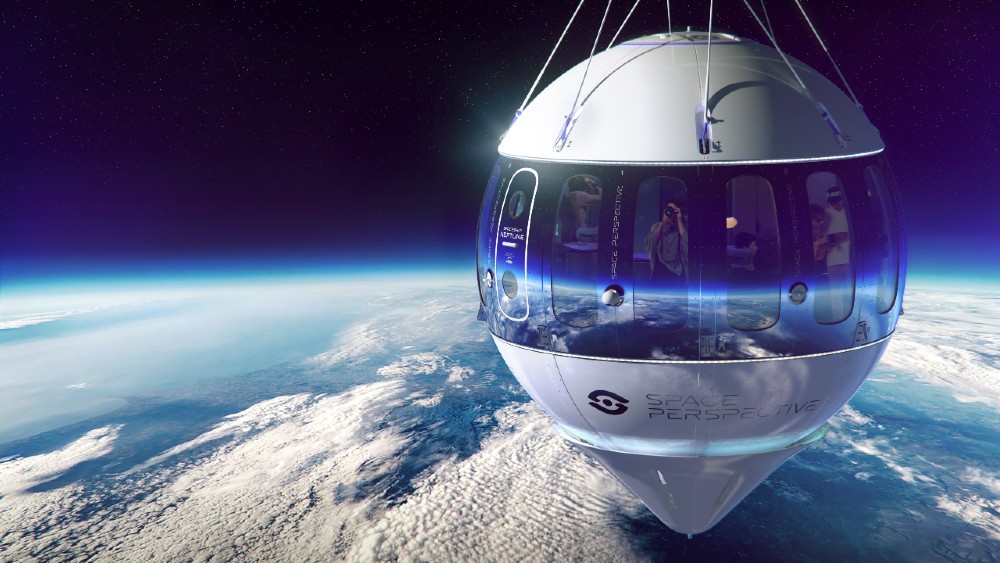 A space balloon that promises to carry eight guests in a swanky swinger’s lounge to the edge of space released its newly designed capsule today. Space Perspective said that the new capsule design of Spaceship Neptune will be safer and maximize the passenger experience by providing a roomier interior with more headroom.

“We released the new interior design a few months ago and that was what drove the redesign of the capsule’s shape,” founder and co-CEO Taber MacCallum told Robb Report. “We realized that a higher ceiling gave a much less claustrophobic feel while allowing us to pack in all the necessary equipment.”

MacCallum said the design’s new exterior, which moved from a squat top and bottom to a more spherical shape, required about 130 mockups. The company worked with Siemens engineering to create the shape as well as a new patent-pending “splash cone” for a waterborne re-entry as it comes back to earth.

The prototype of the capsule is now being produced at a composite facility near Cape Kennedy Space Center, where Space Perspective is based. A new facility to produce the huge space balloons is also under way.

The company, which is offering seats at $125,000 per person, plans its first flight in 2024. The space balloon will ascend at 12 mph and have a two-hour descent that culminates in an ocean splashdown and boat retrieval off the coast of Florida. The interior includes a bar, reclining seats, oversized 360-degree windows, WiFi and tasteful décor that includes fresh herbs for the food and cocktails. It also has a restroom. Space Perspective has even hired hospitality entrepreneur David Grutman as its Experience Curator.

The new design has a “splash cone” that serves as a stabilizer when the capsule lands in the ocean.  Courtesy Space Perspectives

Despite all the niceties, the company has been working hard on the structural engineering of the capsule. “Physics are what drove the shape,” said MacCallum. “A sphere has the strongest natural shape. The complexity of the exercise was enormous, but now we have a lot more details in the engineering.”

The splash cone, which serves as a type of stabilizing sea anchor for the capsule once it touches down, also involved many iterations with Siemens. “The goal was for a soft landing rather than a belly flop,” said MacCallum.

Testing will begin early next year once the prototype is completed. Unmanned testing will happen before the first crewed version goes up. “We expect to test somewhere between 10 and 20 versions before the final is ready,” says MacCallum.

Spaceship Neptune may not fly as high or as fast as its competitors’ rockets, but what can beat seeing the Earth for six hours with a Cosmopolitan in hand from a futuristic Lay-Z-Boy?