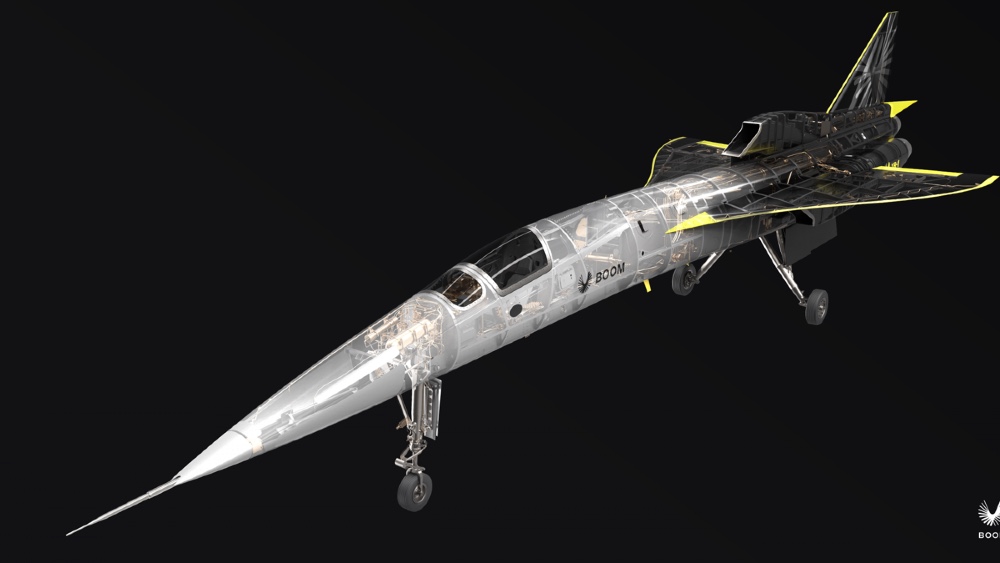 Boom hopes to make some noise in October when it launches its XB-1, a single-seat supersonic jet that will test and demonstrate the principles and practices the company is using to develop the much larger supersonic Overture, an airliner aimed at commercial operators.

“XB-1 will prove key technologies for safe, efficient, and sustainable supersonic travel,” a company spokesperson told Robb Report. The company is holding a live public presentation of the XB-1 on October 7, 2020.

To gauge possible parts for the Overture, the XB-1 will test a nose landing gear unit made of aluminum, titanium and AerMet 100 built to absorb velocities in excess of 13 feet per second and anti-skid brakes designed to handle approach speeds of 213 mph.

In the final stages of construction, the XB-1 will make a very public debut on October 7.  Boom Supersonic

The smaller plane will differ from Overture in that it will have three off-the-shelf J85 General Electric engines and use an afterburner to go supersonic, but both planes will reap the benefits of molded carbon-fiber composites that offer favorable strength-to-weight ratios and better handle the high temperatures associated with supersonic speeds. Those composites were only recently approved by the FAA. Both aircraft also take advantage of computer simulators and 3D printing for parts and tools, which makes the design and construction process faster and more efficient.

“Boom has the advantage of iterating and testing designs in hundreds of computer simulations, which were unavailable to Concorde engineers,” the company said. “When Concorde was designed in the 1970s, engineers were limited to using wind tunnels to iterate on designs, which were not only costly, but extremely time-consuming.”

Such efficiencies matter because Boom hopes to develop Overture so that the cost of flying onboard will be comparable to current business-class travel.

Engineers are able to run thousands of computer simulations on the new aircraft, something they were unable to do when the Concorde was developed in the 1970s.  Boom Supersonic

“The confluence of massive market demand for long-distance air travel, decades of technological advancements and an improvement in fuel efficiency enables us to build a supersonic airliner with dramatically better operating economics,” the spokesman said.

Japan Airlines has pre-ordered 20 Overtures and Virgin pre-ordered 10, although the company will also sell customized models for private use.

Boom is also trying to be environmentally conscious by using the latest sound-reduction technology, making sure its engines are compatible with low-carbon, sustainable aviation fuels and building a LEED-certified assembly line. Including carbon offsets and end-of-life recycling (which was considered during design), Boom says the XB-1 program will be 100 percent carbon neutral.

The much larger Overture will benefit from tests done on components on the XB-1.  Boom Supersonic

Here’s a video of the design and build of the XB-1.