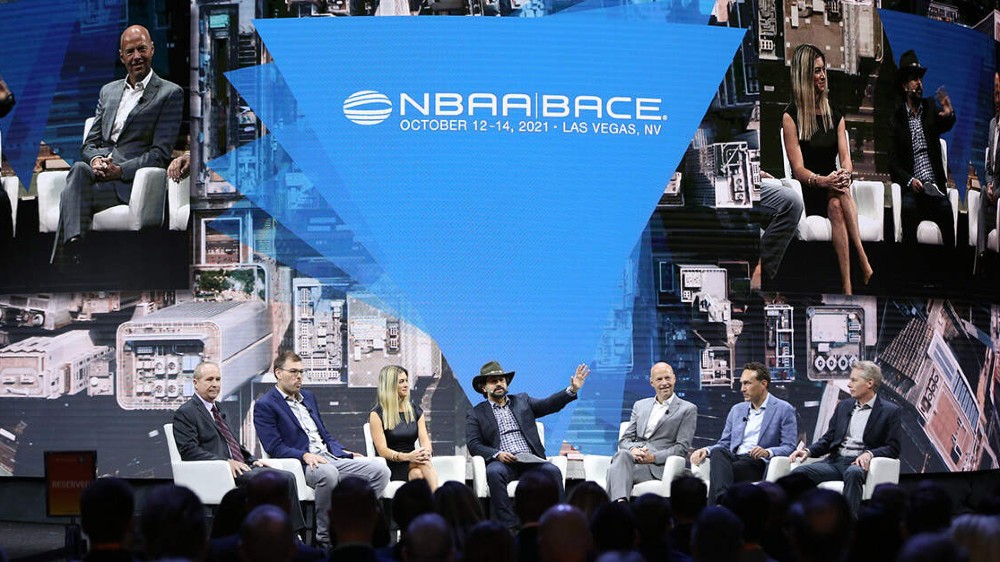 The establishment met the upstarts yesterday during a panel on Advanced Air Mobility (AAM) at the National Business Aviation Association’s annual conference in Las Vegas.

Leaders of the startup eVTOL community discussed the fast-approaching revolution in air mobility and how the urban landscape might look like over the next five to 10 years as electric air taxis come online.

“The vision is to make every person fly every day,” said Sebastian Thrun, CEO of Kitty Hawk, launched in 2010 by Google co-founder Larry Page. “People flying twice a day will make our traffic conditions on the ground faster and safer.”

The Beta Alia will first be used for organ transplant and then move into passenger services.  Courtesy Beta Technologies

Eric Allison of Joby Aviation said his company’s end goal with its new eVTOL is to “save one billion people an hour each day.” Previously CEO of Uber Elevate, which gave the AAM movement a high public profile, Allison said that noise will be the differentiator between electric aircraft and conventional helicopters. Noise will also be a key factor in allowing the eVTOL to fly across city skies. Joby’s S4 has a much lower sound profile than a traditional helicopter, which should clear the path to both regulatory and public acceptance, said Allison.

Beta Technologies CEO Kyle Clark believes that public acceptance will come as eVTOL makers use their aircraft first for non-passenger services like organ deliveries and cargo transport. “By the time we get urban environments accepting the aircraft, we’ll have millions of flight hours completed,” he says. “Flying in an electric aircraft is absolutely wonderful. We can make flying fun for the first time.”

Melissa Tomkiel, president of Blade Urban Air Mobility, said that it will be critical to develop infrastructure in urban centers, partly by using existing heliports, but also developing new vertiports in conjunction with local governments. “We’ll also have to overcome the stigma [of urban-air transport being too expensive for the general public],” she said. “That’s one of the big challenges.”

Overair CEO Benjamin Tigner foresees a wider role for eVTOL beyond the urban landscape. “There are a dozen different aircraft configurations that have never been part of the aviation landscape,” he said, referring to the wide-ranging eVTOL designs coming online. “We see a blossoming of opportunity here—ways that aviation can serve mankind.”

Tigner told Robb Report in a follow-up interview that he foresees electric air vehicles connecting many rural communities. “Right now, small general-aviation airplanes are not seen as reliable transportation, but we have thousands of remote airports that are designed for small aircraft,” said Tigner. “We think this new era of eVTOL will offer a reliable backbone of hubs that could offer economic revitalization to many areas.”

Rural communities in Alaska, said Tigner, are not connected by roads, but use small aircraft. “If we offer more fluid and reliable flights, these communities can expand and thrive much more than they ever have,” he said, noting he sees that kind of transportation across the entire country.

The timeline for new aircraft certification remains on track. Joby has said it expects its S4 to begin air-taxi services in 2024, while Tigner expects Overair’s Butterfly to be certified in 2025, entering commercial service a year later.

Thrun said that his company’s eVTOL is currently flying three times each week, while Beta Technologies’ Clark probably has the most flight hours in their electric aircraft than any other CEO on the stage. Clark sees a future where very few aircraft generate carbon emissions.

“The next time you’re stuck in traffic,” Thrun told the audience. “Imagine that your car can fly. It’s always been the dreamers who change the world, and dreamers like us think you don’t have to be stuck in traffic, simply by democratizing flight.”