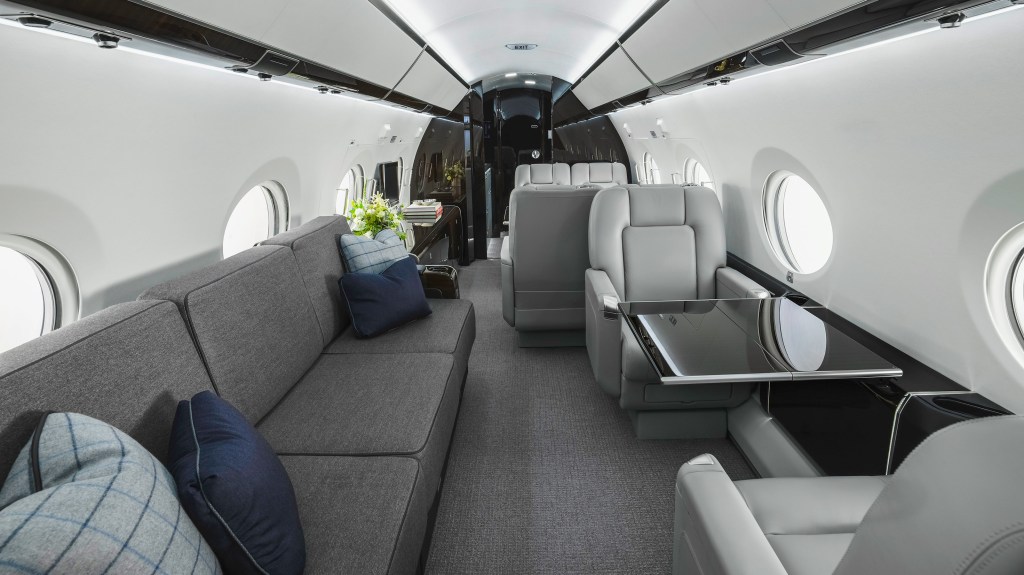 In a conference room at Magellan Jets’ headquarters in downtown Quincy, Mass., just south of Boston, president Anthony Tivnan recalls how he and CEO Joshua Hebert first ventured into the private-aviation business with a web-based charter-­brokerage company—and how that company went through some name changes. “We started that business around 16 years ago,” recalls Tivnan. “We called it Bid Jet Charter. But think about a couple Boston guys calling around to prospective clients saying, ‘Hey, it’s Anthony and Joshua from Bid Jet Charter.’ People would say, ‘What? Chowder? What are you talking about, Chowder?’ We decided, all right, that’s not working.” Bid Jet Charter soon became Charter Auction, but that didn’t help much. “Eventually,” Tivnan said, “Jets.com became the name.” (Companies called Charter Auction and Jets.com are operating today, but they have no connections to Tivnan and Hebert or the company they founded.)

In 2008, Tivnan and Hebert established their current business—a jet card and on-demand-charter company—and named it after the Portuguese explorer who in the early 16th century organized a Spanish expedition to the East Indies that resulted in the first circumnavigation of the planet. Magellan didn’t complete the journey; he was killed during a battle in the Philippines with warriors from the island of Mactan. But he did arrange the trip and certainly made a commitment to its completion, so he’s a good namesake for the company.

A walk through the process of acquiring a flight card—with a mostly fictional prospective customer we’ll call the Client—offers a look at how the Magellan Jets operation works.

The Client runs a lucrative business in the Boston area and is planning to travel to the Los Angeles area three or four times in the next year for work- or family-related reasons. His family—wife and two teenage children—and their dog will likely accompany him on those trips. He’s tall and doesn’t enjoy flying, especially taking off and landing.

Magellan knows all this and much more, because the Client has spent time meeting with or speaking by phone to a member of the company’s Aviation Consulting Group. (Magellan doesn’t call them sales people.) “They’re talking to a customer on the phone and they’re asking questions, listening: ‘What are your preferences, what type of aircraft do you like, who travels with you, is this family, is this personal, how often are you flying?’ ” says Tivnan. “They’re really trying to get a scope of the customer’s portfolio and then making recommendations based on what they’re hearing.”

Based on the expected flight hours, the consultant will likely recommend a flight card instead of chartering each flight individually. It will be more cost effective and, if the Client purchases the card through his business, it will be easier to pinpoint the cost in the company budget because the price will be set. On-demand charter prices, by contrast, can vary from flight to flight. Magellan refers to its cards as Corporate Memberships. Individuals can purchase Bespoke Memberships, so named because of the number of hours you can choose (25, 50, 100, or 200-plus) and the perks (fuel-price lock, peak-travel-time discounts), add-ons (complimentary catering, ground services), and options you can select (premium catering, a flight attendant, Wi-Fi, concierge services). These options and add-ons are also available to corporate members. More significantly, you or your company can select a specific type of plane, not just a class.

The Magellan consultant likely will recommend a 50-hour card, which should cover four round-trip flights between Boston and Los Angeles, and he might suggest adding ground transportation, premium catering (because he knows the family members are finicky eaters), and Wi-Fi (because the Client and his wife will be conducting business while flying, and the kids will want to play video games).

As noted, Magellan allows its members to choose specific plane models, not just plane categories. “You can have that consistency,” says Tivnan. “When a passenger gets on the plane, they’re familiar with it. If it’s a Hawker 800XP, they know where the microwave is. They know how much luggage they can bring. If your selection is limited to only a jet category, such as midsize, then it could be a Learjet 60, it could be a Citation Excel, or it could be a Hawker 800XP. Well, with those jets, you have three different passenger counts, luggage varying from 48 cubic feet to 82 cubic feet, and different ranges.”

The consultant recommends the Bombardier Challenger 300 because it can fly coast to coast nonstop (so no additional takeoffs and landings), has plenty of baggage space, and is one of the most spacious super midsize jets (including 6 feet 1 inch of headroom, so the Client and his family won’t feel cramped on a 6-hour flight, and the dog will have some room to stretch out).

The Client notes that he and his family also vacation a couple times a year in Belfast, Maine, which is about 5 hours by car from the Boston area. Should he add hours to his flight card to accommodate those trips?

The likely answer is no, because it’s a relatively short flight, and as the Magellan consultant knows, the airport in Belfast doesn’t accommodate jets. Instead, the consultant will recommend that the Client charter those flights through Magellan, and probably suggest that the family fly on a Pilatus PC-12, knowing that this single-engine turboprop has good speed and plenty of space and is the largest aircraft that the airport can accommodate.

“Some folks might have four or five shorter hops,” says Tivnan. “We’ll plan for what you’re going to do 95 percent of the time and recommend the right membership for that. If the most cost-effective way to do those side trips is on-demand charter, then when those come up, we’ll do those as one-off charter trips.”

The Magellan consultant is expected to know all about the Challenger 300, the PC-12, and every other aircraft model the company has access to. “It’s important to become an expert and know the little things about the aircraft,” says John Amato, vice president of Magellan’s Aviation Consulting Group. He says that most of the consultants have industry experience or a strong interest in aviation. Nevertheless, each goes through at least 3 months of training before they have any contact with active or prospective clients. “During that time, we talk about our market, we talk about aircraft, we talk about regulations within Part 135 [the Federal Aviation Administration’s charter regulations] and other categories, and we go through the safety requirements and the due diligence that we place on any of the operators that are part of the MJPN.”

The MJPN is the Magellan Jets Preferred Network, the group of operators that provide the aircraft and crews for the company’s flights; Magellan doesn’t own any aircraft or employ any flight crews. Tivnan says the network works with about 90 operators and is continuously vetting/auditing them for the MJPN. Each of the operators has between 100 and more than 120 planes.

Amato says Magellan’s consultants will vet all the aircraft and flight crews in the network before booking a flight, and then the flight-support team will do the same. “Flight support looks at it through the lens of being a pilot,” says Amato. “They go through their due diligence and make sure everything checks out—including the crew experience, their background checks, their health records.”

According to Todd Weeber, Magellan’s vice president of services and support, most members of the flight-support department are not just pilots, they’re certified flight instructors who are still active. “The level of aviation nerditude here is unbelievable,” says Weeber. “These folks are anticipating the operational needs before they become needs. Last night, I’m getting ready to leave the office at 9 o’clock, and I’ve got a flight-support person explaining to an aviation consultant that the departure in Nantucket is going to be OK because the spread between the temperature and dew point is 4.5 degrees, and it’s only going to get bigger after sunrise, so don’t sweat it.”

Weeber himself is a pilot, with more than 13,000 hours of flight time. He tells the story of how in the early 2000s he was hired by one of the major charter companies based on his answer to a single question: When you’re piloting a business jet, what do you do when you climb the steps and board the aircraft? Weeber said he turns to the right to check on the passengers. That answer got him the job. “Almost everybody answers that they turn left and go set up the cockpit,” he explains. “But the type of people who succeed in private aviation have sincere empathy that is transferred to their fellow teammates and then to the clients.”

Weeber says the flight-support team would know enough about the Client and family to have the preferred vehicle waiting for them when they land, the right reading material in the cabin, and the correct food from the catering company.

“We would have invested a significant amount of time in understanding you personally, you professionally, your family, your colleagues, right down to what kind of pets you have and what kind of dietary preferences you and everyone in your party has,” he says.

He notes that the information is updated by contacting clients after their flights. “A typical error in private aviation is that one thing happens, and it gets in a client’s profile, and for the next 3 years, for example, you’re getting steak tartare 24/7. And you’re saying, ‘It’s a 6 am flight. Why are you serving me raw steak?’ ”