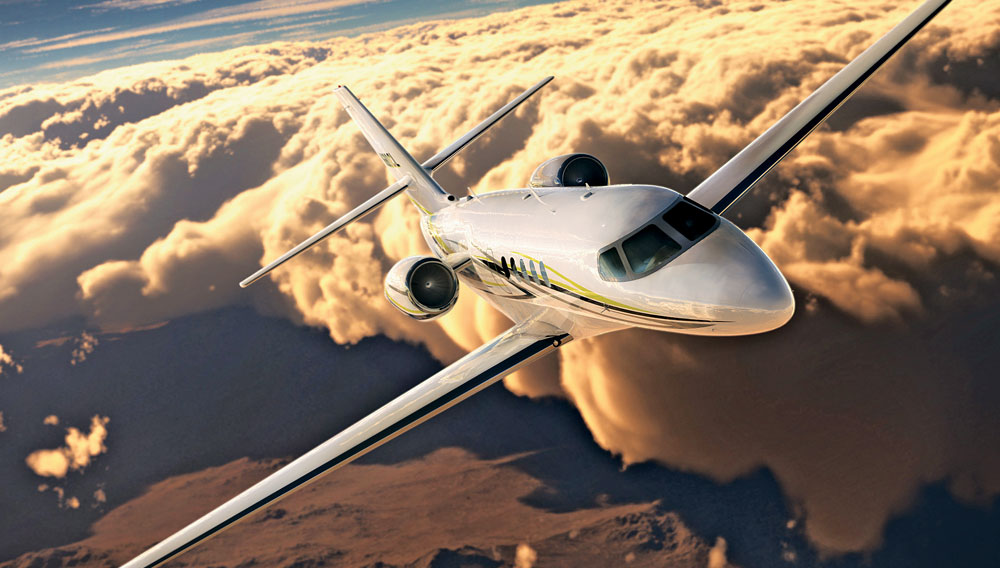 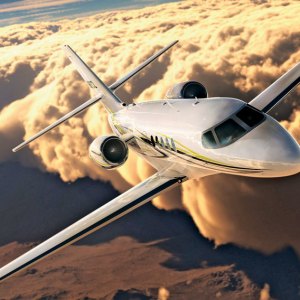 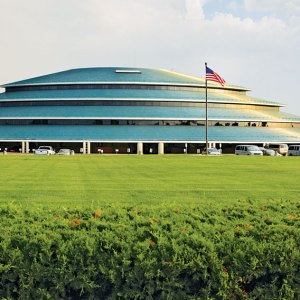 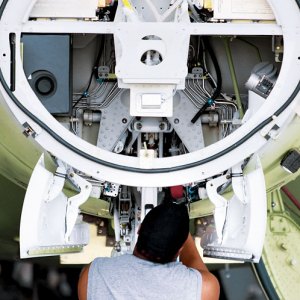 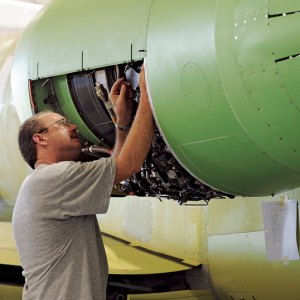 If not good times, these are at least better times in Wichita, Kan., home of Bombardier Learjet, Cessna Aircraft, and other business-jet and personal-aircraft makers. Here in America’s heartland, two leading private-jet manufacturers are developing and delivering a range of new aircraft that, in most cases, offer superior performance, safety, reliability, efficiency, comfort, and value.

“Nothing in our industry is more exciting than new products,” says Brad Thress, senior vice president of business jets for Cessna, which has introduced four new jet models in the last two years: The $4.2 million Citation M2 and $21.5 million Citation Ten are expected to enter service next year, and the $14.9 million Citation Latitude and $26 million Citation Longitude are still a few years away. Cessna’s Wichita neighbor, Learjet, which Canadian transportation conglomerate Bombardier acquired in 1990, has three new models in the pipeline: the $11 million Learjet 70 and $13.5 million Learjet 75, which will replace the 10-year-old Learjet 40 and 45, respectively, and the $20 million Learjet 85, which will be the manufacturer’s longest-range model and its first to feature a composite fuselage. Learjet expects all three models to enter service next year. (For details on all forthcoming models, see “Arrivals and Standbys“)

In the years leading up to the recent recession, business was booming even more in Wichita, where the established manufacturers and numerous startup aircraft makers had several years’ worth of orders on the books and were giving their R-and-D teams virtually limitless budgets to develop new models. Then the momentum halted, resulting in the failure of startups and the losses of thousands of jobs at Cessna, Learjet, and Hawker Beechcraft.

This is not the first time the industry has experienced such a dramatic swing. In the decade prior to the Great Depression, Cessna, Beech, Mooney, and dozens of other aircraft companies were founded in Wichita, leading to its nickname: the Air Capital of the World. The industry stalled during the Great Depression, but World War II fueled its recovery, when the U.S. government ordered an unprecedented number of aircraft. A slump and layoffs followed the war, but then in 1962 Bill Lear arrived in Wichita and began building the Learjet 23, the aircraft that launched the business-jet industry.

The recovery in Wichita is hardly complete. Across town from Cessna and Learjet, Hawker Beechcraft—which has remained in Wichita in some form or another since Walter Beech and his wife, Olive Ann, founded the Beech Aircraft Corporation in 1932—has delayed production of its next composite jet, the light Hawker 200; that aircraft may never reach customers.

After a short boom following its re-formation in 2007, Hawker Beechcraft has struggled in the past few years. Equity firms Goldman Sachs and Onex Partners pieced together the company from Raytheon Aircraft through a $3 billion-plus deal in which the new brand issued a large amount of debt. The weight of that debt burdened the company during and following the recession. In the last four years, Hawker Beechcraft laid off nearly half of its roughly 10,000 employees. In May, to reduce some of its debt, the company filed for Chapter 11 bankruptcy protection. In July, Hawker Beechcraft announced it was undergoing funding negotiations with China’s Superior Aviation Beijing Co. At press time, the details of those negotiations were unclear. In June, however, Hawker Beechcraft executive vice president Shawn Vick noted the success of Hawker Beechcraft’s XPR Performance Upgrades program (xpr.hawkerbeechcraft.com), which gives owners of the Hawker 400XP, Beechjet 400A, and Hawker 800 jets the opportunity to improve the range and reduce the operating cost of those planes. Hawker Beechcraft announced the factory-completed XPR program in May 2010, and Vick said the company currently has a backlog of orders for the upgrades.

Cessna and its workforce also were hit hard by the recession. Prior to 2008, the Textron subsidiary employed some 13,000 people at its Wichita facility. Today, the facility has fewer than 5,000 workers. Learjet, which will celebrate its 50th anniversary in 2013, suffered the lightest losses of the city’s big three business-jet manufacturers, though it still laid off more than a fifth of its employees. It let go fewer than 700 of the nearly 3,000 workers at its Wichita plant and is in the process of expanding the size of that facility by more than 20 percent. The expansion is part of a $55 million investment by Bombardier, the state of Kansas, and the city of Wichita. It includes the construction of more ramp space; new flight, paint, and assembly hangars; flight-test and delivery centers; and additional parking—for the workers Learjet intends to hire over the next decade.

Alan Young, Learjet’s vice president of operations, attributes the company’s resiliency to the diversity of its workload in Wichita. Here, Learjets are developed (development projects continued throughout the recession) and produced, and all Bombardier aircraft are flight-tested. “Because of the spread we’ve got here, we were able to contain [the impact of the recession] quite well,” Young says. “And most of the people we laid off, we’ve now gotten back.”

While Hawker Beechcraft is working out a plan for its future, Cessna and Learjet have indeed begun hiring back some of their employees. And along with Gulfstream in Savannah, Ga. (see “G-Force” below), they are developing and delivering new, innovative aircraft that are reinvigorating customer demand.

Cessna’s Thress is excited about his company’s new jets and what they offer customers, who tend to be devoted to the brand and typically look to Cessna first when considering a new purchase. “In every case that we project an improvement, change, or new model, we have to understand what the customer gets out of it,” he says.

With its new business jets, Cessna is filling many of the gaps in its product lineup, so that current owners can remain Cessna customers when they upgrade. For example, the M2, which Cessna expects to begin delivering late next year, will serve as a step up for current Mustang owners looking for more speed, more sophisticated avionics, and a private lavatory—the last a feature requested by many of the Mustang owners in the Citation Jet Pilots owners association (www.citationjetpilots.com), which Cessna regularly polls when developing new aircraft. Cessna also sees the M2 as an entry-level jet that can draw customers to the brand.

Cessna’s recently introduced Citation Longitude, which is expected to enter service in 2017 as the company’s longest-range aircraft, could keep buyers in the Cessna family who would have otherwise gone to another manufacturer for a super-midsize jet. The Longitude is also the first noncommercial jet expected to feature the new Silvercrest engines from French manufacturer Snecma. In addition to having the greatest thrust-to-efficiency ratio of any business-jet engine, the Silvercrest is an on-condition engine, meaning that it allows most repairs and scheduled maintenance to occur while it is still affixed to the aircraft, thus significantly reducing maintenance costs and turnaround times. The Longitude, along with the rest of Cessna’s forthcoming jets, will be equipped with the latest-generation avionics, which feature touchscreen controls, multiple large heads-up displays, and electronic databases, all of which reduce pilot workload and therefore can enhance safety.

“Most of the improvements in airplanes are evolutionary versus revolutionary,” says Thress. “But the ones that are most visible right now are avionics.” He notes that all of Cessna’s new models will feature Garmin avionics, to help pilots make the transition from one Citation model to the next.

Like Cessna’s forthcoming Citation Ten, Latitude, and Longitude, the Learjet 70 and 75 will feature the Garmin G5000 avionics suite. The Learjet 85, on the other hand, offers pilots the Pro Line Fusion avionics package from Rockwell Collins, which Bombardier recently certified for its ultralong-range Global 5000 and 6000 jets. The new generation of Garmin avionics and the Pro Line Fusion both feature a much cleaner and simpler dash than those of previous generations. They also include heads-up synthetic vision, touch-control flight displays, and integrated flight data, all of which make the pilot’s job easier. With their new models, Cessna and Learjet are also improving the flight experience for passengers.

“We’ve had numerous customer groups give us feedback on all sorts of things that we’ve been working on for about three years,” says Young (including the development of the Learjet 85). “And we put about 98 percent of their comments into the planes—everything from ergonomics to maintainability to cabin screen locations.” The strong, rigid composite material of the aircraft’s fuselage enables the installation of the largest windows ever on a Learjet.

In addition to being the longest-range Learjet ever built, the 85 is the largest. Measuring 665 cubic feet, the Learjet 85’s cabin has 19 percent more volume than that of the Cessna Citation Sovereign. However, Cessna’s two largest new models also have exceptionally spacious cabins. The Citation Latitude and Longitude jets share the same 6-foot-tall, 7-foot wide, flat-floor cabin shape, making them the tallest and widest in the Citation fleet. (The cabin of the Longitude is 4 feet longer than that of the Latitude.)

The new Cessna and Learjet models also enable travelers to remain connected and have access to cabin systems through their personal devices. All of the aircraft can be equipped with cabin-entertainment systems that offer wireless Internet access and connectivity with smartphones and tablet computers.

Bombardier-owned Flexjet—the fractional-share, jet card, and charter provider—recently announced that its customers will have first access to the Learjet 70 and 85. And as part of the nearly $10 billion order it announced in June, NetJets purchased 25 of Cessna’s $14.9 million Citation Latitudes, with the option to purchase 125 more. The Latitudes are expected to enter the NetJets fractional fleet in 2016.

The outlook for aircraft manufacturers and the workers they employ in Wichita is improving. In addition to hiring back workers they laid off during the recession, manufacturers have the assurance of a qualified workforce for years to come. In June, Kansas governor Sam Brownback signed a career- and technical-education bill that provides all high school students in Kansas free tuition for technical-education courses taken at the state’s technical and community colleges.

Organizations such as the National Institute of Aviation Research at Wichita State University (www.niar.wichita.edu), which counts a number of students among its staff, have seen an uptick in activity as they help manufacturers test and certify their new aircraft models and parts and materials.

And in conjunction with several local manufacturers, Exploration Place (www.exploration.org)—a children’s science museum in Wichita—is developing a new aviation exhibit, to supplement its permanent Exploring Flight and Design installation, that focuses on engineering and manufacturing, helping foster interest in aviation for the city’s next generation of assembly-line workers and aerospace engineers.

Wichita, Kan., may be the Air Capital of the World, but many of the best-performing and most comfortable business jets come from Savannah, Ga., where Gulfstream Aerospace Corporation (912.965.3000, www.gulfstream.com) has been operating since 1967, after it was established in the late 1950s as the business-aircraft branch of military-aircraft builder Grumman Aircraft Engineering Co.

Gulfstream plans to deliver a pair of new aircraft by year’s end: the $25 million super-midsize G280, which replaces the G200, and the all-new $64 million G650, which will have the largest cabin and longest range in Gulfstream’s fleet. With the G650, Gulfstream became the first company to receive FAA certification for its electronic three-dimensional model-based type design, for everything from individual parts to the cabin. This approach significantly reduces the time an aircraft takes in the concept-to-build cycle.

In recent years, the company has maximized the use of industry-standard parts and increased the use of bonded materials and machined components. This reduces the total number of parts in an aircraft and simplifies maintenance and repairs, thus minimizing maintenance costs and turnaround times.

Gulfstream also is making considerable investments to bring its aircraft to customers in emerging markets, including China and Brazil. Indeed, China soon will be home to Gulfstream Beijing, making Gulfstream the first business-jet manufacturer to offer factory service in China.