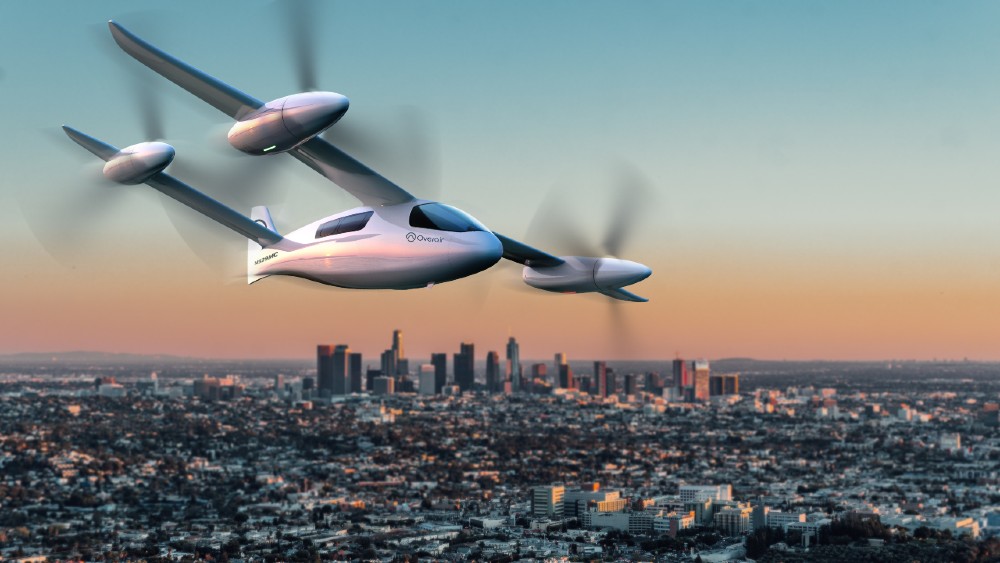 The five-passenger Butterfly is designed to fly in all weather conditions, with a range of 100 miles and top speed of 200 mph. It has a propulsion system that is unique to the eVTOL field, with four large rotors and a total disc area that is twice as large as its nearest competitor.

Its four large electric propulsors reduce power demand compared to other eVTOL aircraft that use a higher number of small propellers on the wings and tail. “This is just a fundamentally different type of aircraft,” said Ben Tigner, Overair CEO. “Butterfly is a transportation system optimized for safety, utilization, passenger experience and affordability.”

With four very large rotors, the Butterfly is more efficient and quieter than its competitors.  Courtesy Overair

Tigner said the propulsion design gives the aircraft more efficiency, so it is able to run on just battery power, rather than the hybrid solution that other competitors are using.

The large propellers also operate at slower speeds than other eVTOLs, reducing its noise output. The amount of sound is unusually low, but also the quality of the sound is different than rotorcraft like traditional helicopters. Its noise signature while hovering is about 55 dBA and 30 dBA at cruise, which is at a low end of the human hearing range.  The company says it should be the quietest-flying electric aircraft.

Overair has an interesting background. Founder Abe Karem was nicknamed the “Dronefather” after designing the unmanned Predator aerial vehicle and the A160 Hummingbird, which set rotorcraft endurance records. Karem also applied military applications to the Butterfly, before spinning off Overair to prepare the aircraft for civilian use.

The Butterfly will have a total payload of 1,100 lbs., with redundant systems, including the ability to fly with one inoperative propeller. The aircraft has fly-by-wire controls, which will allow future versions to eventually fly autonomously.

Overair expects the Butterfly prototype to fly next year, and receive FAA certification in 2025.