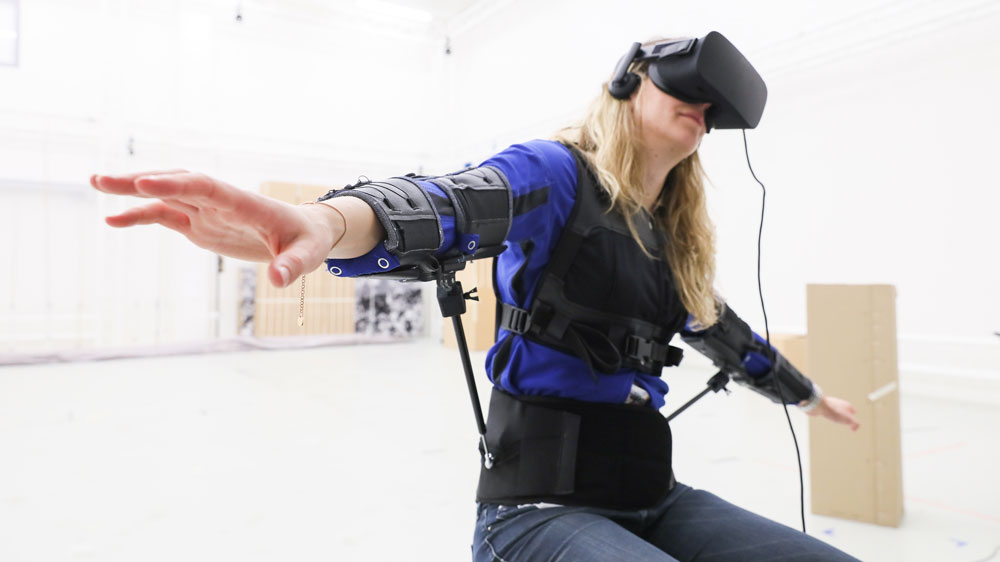 Imagine if you could spread your arms and fly like a bird, turning effortlessly in any direction, as you view the landscape from above. Engineers in Switzerland are working now to create that very experience in virtual reality, using drones and a set of lightweight strap-on devices that convey sensation to the user’s arms and torso. The goal of the research, at the Federal Polytechnic School in Lausanne, Switzerland, is not primarily to help everyone experience the joy of unfettered flight—that’s just a bonus. The researchers are looking for ways to help first responders control rescue drones more easily and intuitively, so they can focus on their mission instead of on their control system.

The researchers have created a lightweight “fly jacket” with motion sensors built in to the arms and torso. Rigid props from the elbows to the waist help support the arms when they are spread out for flying, while still allowing for freedom of motion. When the pilot leans back, the drone will climb upward. Lean forward and it will descend, and leaning to either side will turn the drone. Virtual reality goggles convey to the pilot a 360-degree view of the drone’s flight path, in real time. (And we thought the Roto VR offered freedom).

The system also improves over the current joystick controller by leaving the pilot’s hands free. Gloves with sensors can be used to give additional commands to the drone, for takeoff and landing, or to note points of interest that can be compiled on a map. This feature is especially useful for firefighters or rescuers, who can quickly and precisely communicate to ground crews where their help is needed. Engineers who have tested the system say it creates the illusion you are actually flying, in a way that joysticks can’t. This is why researchers imagine the system could also be adapted for simulators and eventually flying full-size planes.

For the rest of us, could this system provide the fulfillment of a dream nearly all humans share . . . to fly like the birds? It may only be virtual reality, but it’s a step closer to the gift of wings.