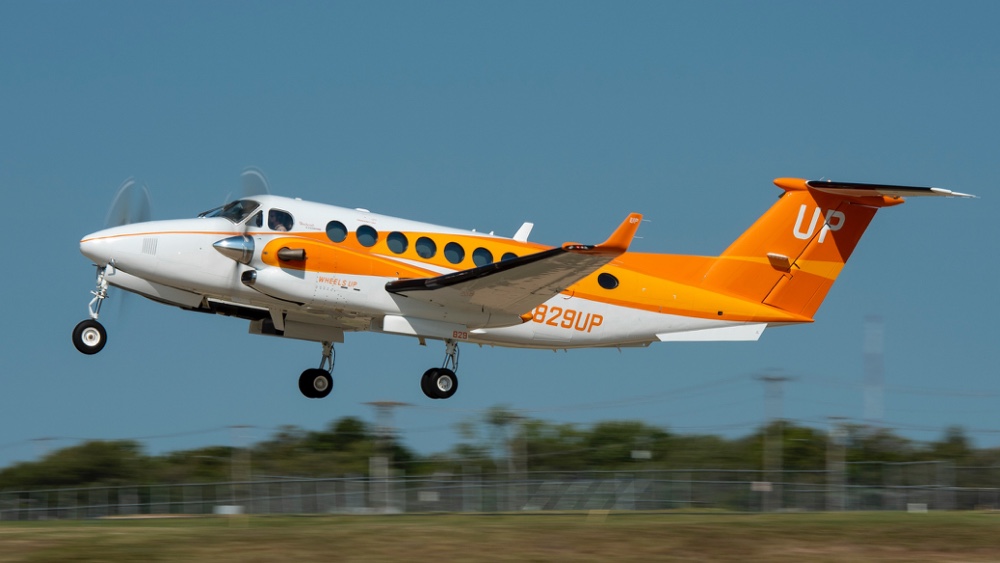 Wheels Up, in partnership with Textron Aviation, has unveiled its first-ever orange Beechcraft King Air 350i aircraft as part of its Wheels Up Cares and Meals Up initiatives. The private-air provider launched Meals Up in March to raise money for Feeding America’s efforts to combat food insecurity during the Covid-19 crisis. The orange King Air was created to honor Feeding America’s Hunger Action Month for this September.

Meals Up has already raised enough funds through its members and network for the equivalent of 47 million meals for Feeding America. Wheels Up ambassadors and friends including Russell Wilson, Ciara, Tom Brady, JJ Watt, Alex Rodriguez, Jennifer Lopez, and Joey Logano, have publicly backed the initiative.

“We kicked off the Meals Up initiative back in March with one purpose—to help feed people—and we knew then that the next Wheels Up Cares plane would be orange in support of fighting food insecurity and to raise awareness for Feeding America’s Hunger Action Month,” said Kenny Dichter, founder and CEO of Wheels Up.

NFL star Russell Wilson and his wife, the singer Ciara, publicly promoted the Meals Up initiative while also making sizable donations to the Feeding America cause.  MegaAgency

The Wheels Up Orange Plane is a flying symbol to raise awareness for food insecurity as well as honoring Feeding America and the frontline workers at the 200 food banks across the US. The control towers at New York’s LaGuardia airport and pylons at LAX will light up orange tonight to bring attention to the issue of hunger.

The orange aircraft will be a permanent part of the Wheels Up fleet. The company has also painted other aircraft distinct colors to represent their backing of specific causes. It has a camouflage plane for the Tragedy Assistance Program for Survivors, a red plane for the American Heart Association and Simon’s Heart, a teal plane for Ovarian Cancer Awareness, and a pink plane for Breast Cancer Awareness and the Dubin Breast Center of the Tisch Cancer Institute at Mount Sinai.

Textron Aviation donated the design and livery of the orange plane “to shine a light on this important cause,” said Dichter, adding that the aircraft manufacturer has also funded 500,000 meals.

Jennifer Lopez and Alex Rodriguez were also sizable contributors to the initiative, which has so far raised funds for 47 million meals.  MegaAgency

“Now more than ever, it is imperative that we come together to support the many people affected by this pandemic,” said Ron Draper, CEO of Textron Aviation.

It is estimated that 50 million Americans could be impacted by food insecurity during the Covid-19 pandemic.