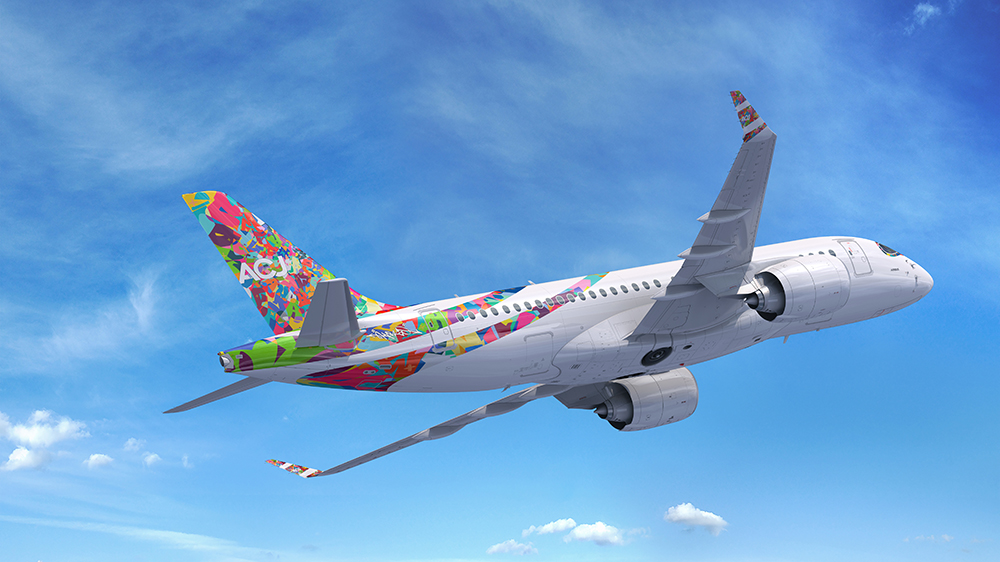 A livery sends a message: ‘I’m here’ or ‘I’m not,’ and everything in between,” says David Hedley Noble, CEO of Aerobrand, a London-based aviation design firm. “A good design often matches the personality of the owner. Sometimes that’s good,” he says. “And sometimes that’s bad.”

Compared to lavish, high-design interiors on which many owners spare no expense, jet liveries tend to be the middle children of private aviation—subdued, conventional, often overlooked. Many private fliers demand anonymity, while others, like heads of state and multinational corporations, prefer only subtle identifiers on their business jets. But that’s changing, if slowly, with more owners and designers now viewing the exterior as a canvas for creativity. “Ninety percent still go for the humdrum,” says Edése Doret, president of Edése Doret Industrial Design in New York City. “But the other 10 percent are open to new ideas.”

One of Doret’s clients, a Boeing Business Jet owner, recently opted for a muted gold exterior, to match the interior. “Another livery I’m working on looks like a crazy abstract painting, almost like camouflage,” he says, adding that the paint job for his celebrity client is extremely technical and a challenge for the paint shop. Doret has also been steering clients toward single, solid colors like you’d find in an automotive showroom. “These private aircraft are like luxury cars, and you don’t see a Bugatti or a Rolls-Royce with stripes on it.”

A rendering of the camouflage exterior by Edése Doret.  Courtesy of Edése Doret

Of course, stripes need not be boring. “I enjoy the challenge of a traditional design,” says J. P. Magnano, founder and creative director of 3D Viz in Miami. “It relies on subtleties: What minor changes can I incorporate to make it stand out?”

Those changes were apparent in Magnano’s recent livery for the owner of the Indianapolis Colts, which are stylish and a lot more subtle than last-generation of professional team jet exteriors. The 737 has twin stripes that begin at the cockpit and run along top and bottom to the tail, which ends in a flourish with the Colts’ horseshoe logo. “Sports teams often like to use a logo for marketing,” says Mangnano. “But the design doesn’t have to be obnoxious. It can look contemporary and elegant.”

The new exterior for the Indianapolis Colts’ BBJ 737-700.  Courtesy of 3D Viz

Graffiti artist Cyril Kongo’s colorful livery on the new ACJ220 is a replication of the business jet’s vibrant interior. ACJ CEO Benoit Defforge said commissioning Kongo to do the interior and exterior was designed to “shake up the industry a bit” compared to the usual “quiet” exteriors. The artist says the abstract calligraphic design was inspired by “color, lines and harmony.” The joyous look even extends to the wingtips and around the cockpit windshield. “I wanted to keep my graphic vocabulary but on a new canvas,” he says.

Aerobrand’s Hedley Noble says designers have the ability to “portray any message while remaining understated” and that a “classic, lower-key and more elegant” aesthetic will give staying power to a customized livery. That can include a paint job composed of distinct but overlapping hues that create the effect of changing the jet’s color depending on how the light hits it.

“That’s difficult to do,” says Hedley Noble, noting that extra paint adds weight—never a small concern when it comes to aircraft—and that “real art” is involved in creating matching lines on a curved fuselage. “The guys in the paint shops hate me when I ask for that, but there should be a level of sophistication,” he says. “A plane is a beautiful piece of sculpture and deserves to be designed and treated well.” Also worth considering: While only those invited aboard will see your jet’s interior, the exterior is always on display.

The owner of an Airbus Corporate Helicopter is actually able to see his livery transform before his eyes.

When designer Robin Dunlop suggested to a Venezuelan owner that he use electroluminiscent paint the owner was thrilled. “He originally wanted to make it matte black, but we convinced him that he was too close to the Equator so it would absorb heat,” says Dunlop, founder of London-based CTM Design. “Now, it’s great for night flying because it literally glows when you shine a light on it during landing.”