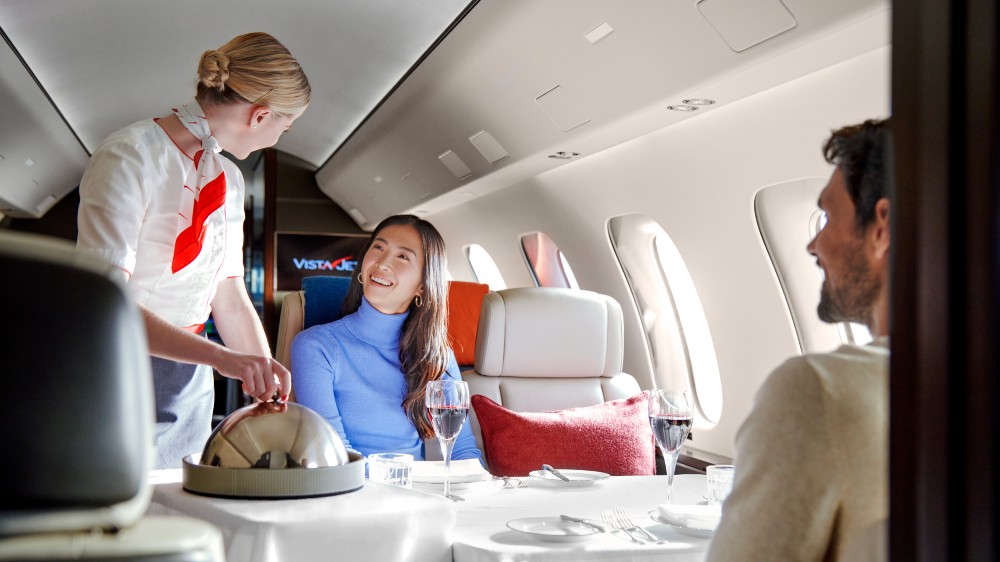 Food fights are becoming standard in private aviation, though it’s a very different war than the 1970s Animal House battles with mashed potatoes and cream-puffs. With the rapid growth in private fliers, many top firms realized their aircraft menus lacked variety and quality, the two features of haute cuisine considered standard in five-star resorts and restaurants.

Leading fractional and membership firms are now rectifying that with dishes that would’ve been considered extravagant, except perhaps on the converted jumbo jets of Russian oligarchs or Arab sheiks. Alliances between jet firms and leading restaurateurs are becoming common.

On a recent media flight on a Bombardier 7500 Global from Miami to New York, VistaJet unveiled a beautiful spread for several lucky journalists, based on its existing alliance with Nobu. The menu included Yellow Tail Jalapeno, Black Cod with Miso, Prime Beef tenderloin, and other sushi and vegan options.

Chef Nobu Matsuhisa also created Steamed Salmon Dry Miso, a dish that is exclusive for the private-jet firm. “We work to ensure our members have the same level of quality and service in the sky as they would expect on the ground,” said Leona Qi, president of VistaJet US.

“When you look at this clientele, you know what hotels they visit and the level of service they’re used to everywhere else, especially when private jets cost so much more,” said Kimberly Herrell, CEO of charter operator Schubach Aviation in Carlsbad, California, which has also launched a new haute-cuisine initiative.

But limitations of high-altitude dining—including the effects of elevation, lower humidity, and increased noise and movement on taste buds and senses—has prompted the air providers to look for more creative solutions. Some chefs curate menus that are cooked more than 24 hours before takeoff, refrigerated overnight at the hangar, and served at room temperature—while retaining the Michelin magic.

“There are some elements of dishes such as foams, molecular, and fried foods that won’t travel particularly well, so we have to reinvent them to meet the expectations of our clients,” said Diego Sabino, VistaJet’s vice president of private dining.

The alliances are wide-ranging. NetJets has partnered with Jean-Georges Vongerichten, the three-starred Michelin chef behind the eponymous restaurants, to create a menu for flights departing from the New York metro area featuring vegan-friendly, Asian-inspired American fare. Flexjet most recently worked with chef Geoffrey Zakarian, who curated for fractional owners flying out of New York dishes from his Manhattan staple, The Lambs Club.

Reading, England-based luxury tour operator Red Savannah is touting its on-board cuisine as a major draw for its $150,000, 15-person inaugural Grand Tour of Europe planned for next September. It will serve cuisine from London members-only dining club Mosimann’s—a frequent fixture at Buckingham Palace that handled Prince William and Prince Harry’s wedding banquets—aboard the Embraer Legacy ER135 between hops along the Greek Isles and Adriatic Riviera.

“All of our dishes are served cold or room temperature to avoid room for errors,” Redzikowski told Robb Report. “So if it’s a French classic dish with Bearnaise and potato, no, it wouldn’t work, because we can’t heat it up, and everything has to be 100-percent cooked beforehand.”

The smaller the plane, the trickier it gets. Heavy jets usually have a full galley with a refrigerator and oven or microwave, while midsize jets tend to have at least a microwave. Smaller planes, however, have nothing but an ice box.

“When we construct an onboard menu for our clients, we take everything from garnishes, sauces, and sides into consideration,” said Hilary Clark, director of inflight services at Planet 9, a private jet charter and aircraft management company in Van Nuys, California.

Planet 9, which specializes in Falcon, Bombardier and Gulfstream ultra-long range aircraft, sends its flight attendants to train at the Culinary Institute of America in San Antonio, Texas, where they study subjects ranging from food safety to beverage pairings.

Clark said factors considered when planning meal service include “the time of departure, the time of day that the pickup or delivery of food needs to occur, the means of transporting it, the time it will take from picking it up from the restaurant to arriving to the aircraft to then storing it safely, and of course the precautions you need to take to keep the food cold if the clients are running late for departure.”

Some tenets of gastronomy are non-negotiable. Sushi, for example, must remain chilled at no more than 41 degrees Fahrenheit. If serving caviar, do not forget the mother-of-pearl spoons. “You cannot serve precious caviar with a metal spoon,” Clark said, “as it may alter the taste.”