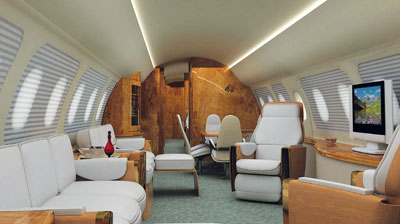 During the last decade, the top two commercial aircraft manufacturers also have dominated the market for the largest corporate jets: Boeing, with its Boeing Business Jet (and BBJ2 and BBJ3 descendants), and Airbus, with its A318 Elite, A319 Corporate Jetliner (ACJ), and A320 Prestige. All are commercial airliners that the builders have modified for private flight. Now, Brazil’s Embraer plans to adapt its 190 commercial airframe for private flight. Deliveries of the Lineage 1000 could begin by the middle of 2008.

The jets from Boeing, Airbus, and Embraer do not have the range of the Gulfstream G550 (about 7,800 miles) or the Bombardier Global Express (about 7,100 miles). The ACJ, Airbus’ longest-range jet, can fly as far as 6,900 miles; the BBJ3, scheduled for introduction next year, will fly about 5,500; and the Lineage will fly about 4,800. But what these aircraft lack in range, they compensate for with cabin size. The BBJ3 features the largest cabin, at about 107 feet long and 11.5 feet wide; the Airbus Prestige follows, at about 90 by 12 feet; and the Lineage will measure about 84 by 9 feet. By contrast, both the Gulfstream and the Global Express are about 50 feet long and 7 or 8 feet wide.

Embraer’s Lineage will seat as many as 19 passengers in a cabin that can be split into five zones: a working area with a conference table, a living area with a sofa and plasma TV, a dining area, a sleeping area, and a seating area similar to a commercial plane’s first-class section. The aircraft will have room for three lavatories, including one with a stand-up shower.

The Lineage 1000 will fly to 41,000 feet and reach a maximum speed of Mach 0.82. Embraer plans to sell three or four of the planes per year at a projected price of about $41 million for a furnished aircraft, compared to about $62.5 million for the BBJ3. Prices for the Airbus private jets range from about $45 million to $65 million, while the Gulfstream and Global Express both sell for about $45 million.