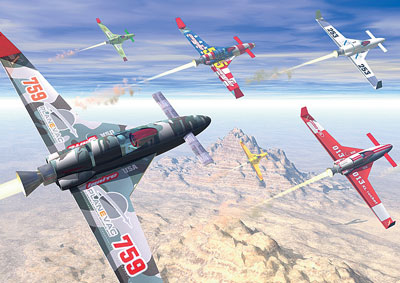 A newly formed racing organization flies in the face of the belief that sports are not rocket science. “We have the technology now to create a 21st-century racing league for a 21st-century audience,” says Granger Whitelaw, president and co-founder of the Rocket Racing League, which plans to begin its inaugural season of competitions next year. “We have the technology to deliver the most unbelievable fan experience that the world has ever seen.”

In other words, the league’s single-seater rockets themselves—which will measure 19 feet long, have a wingspan of 29 feet, and run on a mixture of liquid oxygen and kerosene that will shoot a plume of flame from the tail—are not what excites Whitelaw most. Instead, he is thrilled with the prospect of fans being able to compete virtually against the 10 rockets and pilots by participating in races through the Internet or gaming consoles such as the Xbox 360. Although difficult, it will be possible for a gamer, while sitting at home, thousands of miles away from the track, to roar past the real rockets and win the race.

The shape of the racecourse and the borders of the 10 lanes will be superimposed on large video screens that fans on the ground can view. The vessels, which take off horizontally in the manner of a plane, will fly 50 feet apart, but those distances will appear much smaller to viewers watching at home. “They’re not in danger of crossing or crashing into each other,” Whitelaw says. “This is not NASCAR bump and grind.” The rockets will be able to reach a maximum velocity of 320 mph, but they will race at speeds from 250 mph to 280 mph. “We never come directly at the fans,” Whitelaw says. “We go straight up, around, and back down. It’s very safe, and there are plenty of places to bail out to the side. Plus, the rockets are gliders, too. If they lose engine power, they glide [to the ground].”

Whitelaw expects to stage at least six races and perhaps as many as 10 in 2007. Specific dates and venues will be announced October 20 and 21 in Las Cruces, N.M., at the X Prize Cup. The space exposition will offer $2.5 million in prize money in three contests—the Lunar Lander Challenge, the Vertical Rocket Challenge, and the Space Elevator Games—created to encourage engineers to build machines capable of space exploration.

Whitelaw, who partially sponsored two teams that won the Indianapolis 500, co-founded the RRL with Peter Diamandis, creator of the $10 million Ansari X Prize, which was awarded to Scaled Composites’ SpaceShipOne vessel in October 2004 for flying to the edge of space twice within two weeks. The first race team to commit to the RRL, Leading Edge, includes Don “Dagger” Grantham Jr., Robert “Bobaloo” Rickard, and pilot Korey “Axe” Amundson. Each is a part-time reservist who has flown F-16 fighter jets with the 302nd Fighter Squadron at Luke Air Force Base in Glendale, Ariz. Grantham is unworried by the notion that Leading Edge could be defeated by a 14-year-old perched in front of a TV somewhere on the other side of the country. “Who knows? It might happen,” he says. “If it does happen, I think we might give him a call and see if he wants a job.”