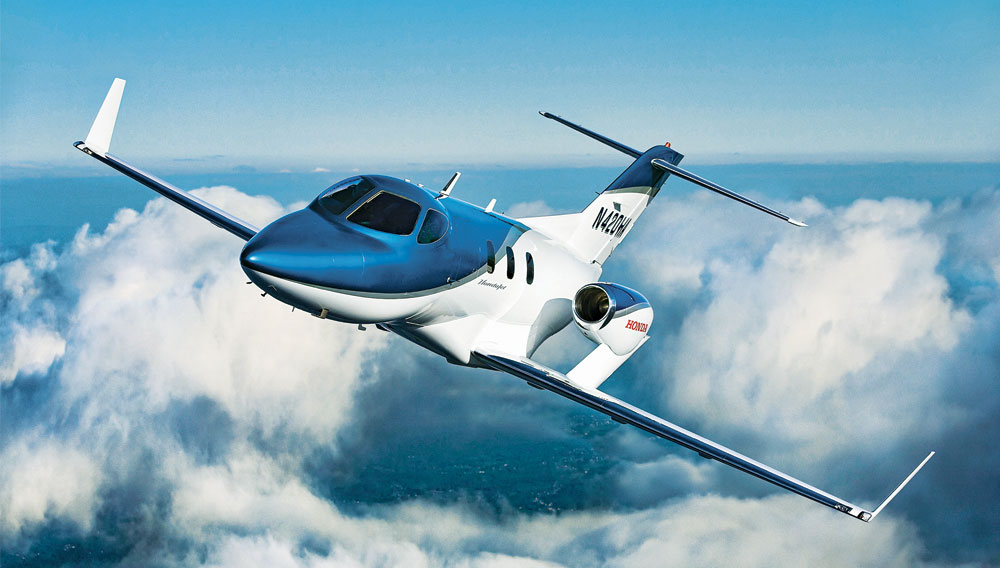 A new aircraft’s path from inspiration to design to production can be long. Honda Aircraft Co. president and CEO Michimasa Fujino can attest to this. He began developing the design of a light business jet in 1997 while working with Honda R&D Americas, a U.S.-based division of Honda that develops new vehicles. His efforts would eventually produce the HondaJet, a relatively quiet and fuel-efficient $4.5 million aircraft that can carry five passengers in its standard configuration, travel at a maximum cruising speed of 483 mph, fly as high as 43,000 feet, and, under the right conditions, cover nearly 1,360 miles without refueling.

By 2003, Fujino and his team had built a prototype of the HondaJet, which featured an innovative over-the-wing engine mount. Fujino believed that wing-mounted engines could enhance a jet’s aerodynamics and fuel efficiency while reducing the noise heard in the cabin and on the ground. Honda introduced the aircraft at the 2005 EAA AirVenture Oshkosh show in Wisconsin. The following year, Fujino helped form Honda Aircraft Co. to build a production version of the jet, test it, usher it through Federal Aviation Administration (FAA) certification, and market it. At the time, the company announced that deliveries of the jet would begin in three or four years.

Since then, Honda Aircraft Co. has built a complex of four facilities covering nearly 14 acres in North Carolina for research and development, production, pilot training, customer service, and maintenance. The company has invested more than $140 million in the facilities, where it employs more than 1,200 workers. Over the years, its test pilots have logged more than 2,000 hours in a fleet of test aircraft as part of the FAA-certification process. In June, the first production-model HondaJet made its initial flight, and in October, the company reported that the production line in North Carolina was full with 11 aircraft.

The first customer deliveries of the HondaJet are now scheduled for early this year, immediately after the FAA certifies the jet. That will be more than five years later than Fujino estimated in 2006, and nearly two decades after he first envisioned the aircraft.