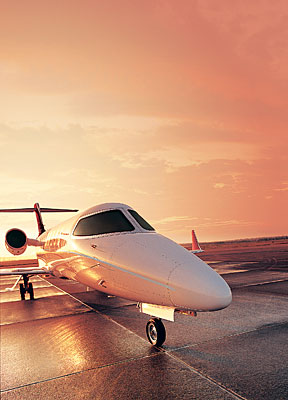 Adam Katz, the genial, effusive founder of the New York–based aircraft charter operation Talon Air, often pilots his planes himself. He also enjoys ferrying clients from place to place in his Robinson R44 helicopter, which he recently learned to pilot, and he constantly is dreaming up other amenities to offer them. For example, when you take advantage of the company’s door-to-door limousine service, a separate limo will pick up your luggage, so that your bags are waiting for you in the plane. You also have round-the-clock access to a concierge, who can make restaurant and hotel reservations and arrange for yacht charters, among other conveniences. Before each flight, you fill out a three-page form to ensure that the food, beverages, magazines, and other items that you prefer will be on the plane when you board. And during the flight, you receive a package containing spa products by Frédéric Fekkai.

I recently flew on Talon Air’s eight-passenger Hawker 800XPi, with Katz piloting, from a regional airport in Massachusetts, where, like other private flight passengers, I had bypassed the check-in and security lines and banished any thought of removing my shoes. During the flight to Talon Air’s hangar in Farmingdale, N.Y., located about 50 miles from Manhattan, I enjoyed a running commentary from Katz on the spring landscape passing below. On longer trips, a Talon passenger can indulge in a complimentary massage, manicure, facial, or pedicure, but this flight lasted only 35 minutes, including boarding and deplaning. As I stepped onto the tarmac, I wondered how anyone with the means to fly privately could ever consider flying commercially.

We entered the gleaming hangar, and Katz showed me some of his other planes (also gleaming): a nine-passenger King Air B200, an eight-passenger Hawker 400XP, a 14-passenger Gulfstream IV-SP. Katz, who made his fortune as a real estate entrepreneur, founded Talon Air as a way to subsidize his love of flying. He clearly is fond of Raytheon planes, and indeed he possesses more Raytheon aircraft than any other private owner. Because Talon Air flies only its own planes, it has a relatively small client list (currently fewer than 100). “We’re a boutique operation,” Katz said, “and we’ll never grow so large that we can’t give our customers scrupulous attention. At the same time we manage costs very carefully, partly by not flying dead legs. Right now we have about 50 people, including 27 full-time pilots—no part-time, no per diem. This company is a labor of love.”

Launched in 2001, Talon Air also is fairly young. Katz purchased almost all his planes new, and they have an average age of 18 months, which should please the safety conscious. The fleet consists of nine aircraft, ranging from a twin-engine, two-seat Baron 58, which charters at $800 an hour, to the Gulfstream IV-SP, at $8,000 an hour (including ramp and landing fees and a fuel surcharge). Katz plans to grow the fleet to 15 by the end of this year. He is not eager to expand further, but he acknowledges having a yen for a few larger craft.

Although Katz runs a top-notch charter service—excellent on-time record, perfect safety record, fully computerized onboard avionics, guaranteed service within 12 hours—Talon Air is most notable for its amenities, which, in addition to the aforementioned, include an in-flight audio and video library, a fully stocked bar and concession area, catered food, access to a satellite phone, and an overflight permit that allows international travelers to clear customs at local or regional airports rather than having to land at major airports. And recently Katz purchased and refinished a 135-foot, 12-passenger Broward yacht (named after his daughter, Elana), which will be available toward the end of this year as part of a charter package with Talon Air flights.

Its emphasis on amenities places Talon Air among the forward-thinking flight-service companies, those perceiving themselves as businesses that do more than simply transport you from one point to another. Rather, these companies have crafted business models that address all aspects of your trip. At this point, most offer door-to-door limo service, 24-hour concierge service, and catering. The charter membership company Sentient Jet and the jet-card operations Marquis Jet and JetNetwork are among those that provide discounts and special access to certain resorts or destination clubs. Some firms, including the fractional leader NetJets, are going so far as to offer VIP services for customers’ pets. Indeed, if the private aviation business remains as competitive as it is, fliers can expect, perhaps demand, even more amenities.

“The key,” says Katz, neatly summing up his business philosophy with a wave toward his fleet, “is to sweat the details. If you do, you will never lack clients.”

Fractional-jet firm that flies only the seven-seat Piaggio Avanti P.180, the world’s fastest turboprop. Prices range from $405,000 for a one-sixteenth share to about $3.2 million for a one-half share.

The fractional operation of the maker of Learjets and Challengers. Prices range from about $528,000 for a one-sixteenth share of a Learjet 40XR to about $12.7 million for a one-half share of a Challenger 604. The firm also offers a 25-hour jet-card program.

Jet chartering, sales, and acquisitions firm. Participants in the Executive Travel Program charge travel against a debit account or guarantee a certain amount of annual activity (100 hours, for example). Planes range from a Learjet 35 ($1,895 per hour) to a Boeing Business Jet ($8,500).

Charter operator that recently launched the industry’s first 10-hour jet card. Aircraft range from light jets such as the Raytheon Beechjet 400A (beginning at $41,400 for 10 hours) to large-cabin planes such as the Gulfstream G550 (beginning at $102,900).

Aircraft charter, management, maintenance, and sales firm. Charter planes range from an Aerospatiale Dauphin ($3,200 per hour) to a Gulfstream V ($7,500).

The charter operation of NetJets (also listed here). Aircraft range from a Beechjet 400A ($1,400 per hour) to a Bombardier Global Express ($8,100). A Boeing Business Jet is available at variable rates.

The world’s second-largest fractional operator, owned by Raytheon. Prices range from about $280,000 for a one-sixteenth share of a Beechjet 400A to about $12.2 million for a one-half share of an Embraer Legacy. Also offers the JetPASS membership program, which deducts charges from a $100,000 deposit.

The world’s largest aircraft management and charter company, with expertise in international flight. Planes range from a Beechjet 400 (beginning at $2,250 per hour) to a Bombardier Global Express (beginning at $8,800).

Formerly CharterAuction. Maintains low pricing by placing charter assignments for bid via its auction service. Flying costs, ranging from about $2,450 per hour for light jets to about $5,100 for large ones, are deducted from a minimum deposit of $100,000.

The world’s first and largest fractional jet provider. NetJets fields 14 aircraft types, ranging from the Hawker 400XP, beginning at $406,250 for a one-­sixteenth share, to the Gulf­stream 550, at $21 million for a one-half share.

Private Air Charter operator offering door-to-door travel service for all-inclusive fees. Prices range from $3,250 per hour for a light jet such as a Citation II to $9,600 for a large jet such as a Falcon 900.