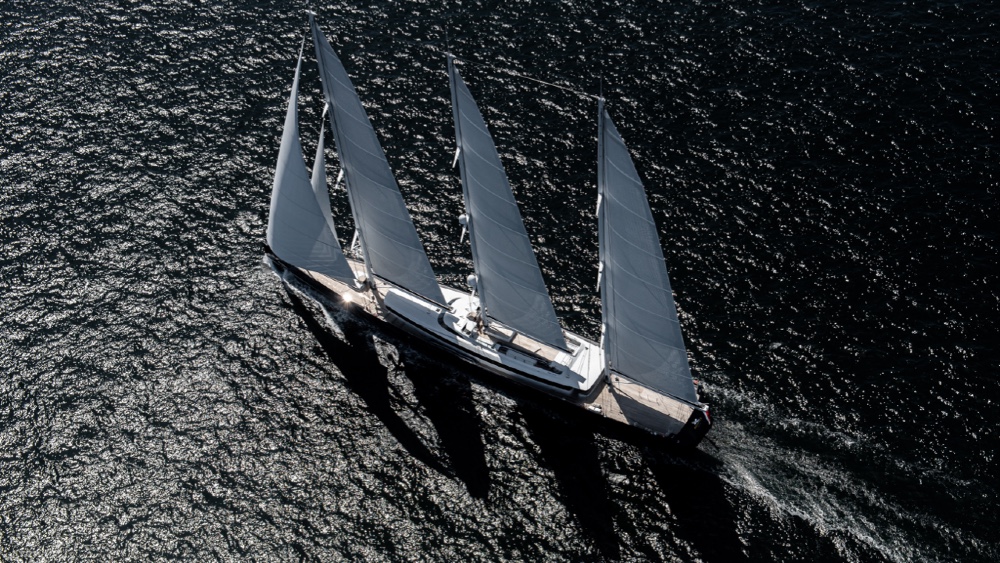 In the case of the just-launched 266-foot Sea Eagle II, timelessness will have to take a back seat to timeliness. “She may look like a contemporary modern sailing yacht now, but in 50-years’ time, she will be a classic,” said a representative of Dykstra Naval Architects, the firm that designed the vessel.

This unusually magnificent sailing yacht, which will be delivered from the Royal Huisman shipyard to her owner in July, not only strikes an imposing presence under a full sailing plan of 37,600 square feet, but also breaks multiple records. She’s the world’s largest aluminum-hulled schooner, the largest vessel the venerable Dutch yard has ever produced, and the seventh-largest sailing yacht in the world. Oh, and her 13-foot-long carbon-fiber rudder is the largest ever built.

Her coolest feature, however, is the Crow’s Nest that travels up and down via hydraulic lift. That means those daring enough to take the trip up the nearly 200-foot-tall main mast will know what it means to look down on the competition.

The three masts have been designed to withstand tremendous loads, while also being styled to suit the rest of the yacht.  Tom Van Oossanen

That mast is part of a carbon-fiber rig that lofts nearly 40,000 square feet of sail, controlled by 34 winches. The sail plan will push the Sea Eagle II to an impressive 21 knots – without burning an ounce of fuel. Along with modern-day performance comes a touch of classic styling. Dykstra and designer Mark Whiteley added a thin plumb bow.

Rondal designed the Integrated Sailing System, which consists of the three carbon Panamax masts with furling booms, hydraulic boomvangs, headsail furling systems, deck winches and equipment, captive winches and continuous solid carbon standing rigging, all with load-sensing capabilities. The carbon-composite masts as well as the main, mizzen, fore and furling booms, are styled to match the design of the yacht. The largest winches have a tremendous pulling load of 18 tons.

Besides looking magnificent under sail, Sea Eagle II has a full array of toys, including sea kayaks, personal watercraft, paddle boards and a dive center. On the exterior, the sundeck adjoins the raised pilothouse, with a full helm station, while an open aft deck offers shelter as well as a bar, lounges and outdoor dining. The interior, appointed in Alpi walnut and oak, has a dining table for 16 amid the lounges. Sea Eagle II will accommodate 12 guests in six staterooms behind the VIP owner’s suite, and there is also housing for 13 crew.

The largest of the yacht’s 34 winches, which control the massive 40,000-square foot sail plan, have 18 tons of pulling load.  Rondal

Royal Huisman had to alter its largest shed and rejigger production to turn out the massive hull. Construction began in June 2017, which means it will be more than three years in the making when she is delivered. That’s would be a relatively short period to build a custom sailing yacht of such complexity, but the short time is even more remarkable considering that the yard had to shut down operations and sea trials during the height of the Covid-19 outbreak.