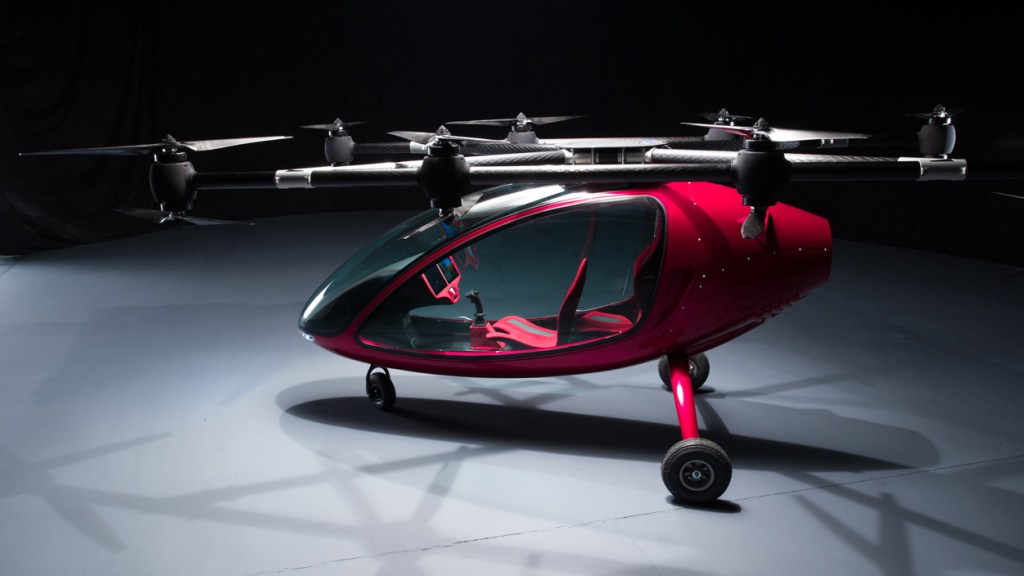 The new Passenger Drone claims to be the world’s most advanced autonomous manned aerial vehicle. Slightly larger than a small car, passengers select their destination on the touchscreen dash and the drone takes over. Equipped with 16 electric engines, it’s able to reach speeds of 50 mph, with very low noise output. Having so many engines increases safety through redundancy, and gives the drone greater payload and range than most quad-copters. Flight tests started in May, and by August, the Passenger Drone was performing its first manned flights.

The two-person drone flies in “autonomous” mode, guided by an LTE (4G) network that offers remote-control capability from the company’s Ground Control and Monitoring Center. If the idea of being flown around by someone sitting in an office hundreds—or potentially thousands—of miles away, is not too appealing, the Passenger Drone can also be flown manually through its all-glass cockpit and a fly-by-wire joystick. Its avionics, stability systems, and electrical control systems were custom designed, and the body is built of lightweight carbon-fiber composites. The drone’s avionics, joystick, CPU, and engine controllers are all managed by fiber optics. The Passenger Drone also uses situational awareness, displays local air traffic, has real-time weather radar, and even offers 3-D terrain data. And because the engines are electric, there are zero emissions.

There has been a rush to market this year by manufacturers of electric VTOL (Vertical Takeoff and Landing) manned aerial vehicles, including models from Uber, Airbus, Google, and Daimler. These drones are seen as potential replacements for the car as the fastest means of transportation. It may sound futuristic, but Passenger Drone says that “mass production” could eventually bring down costs enough to make its VTOL affordable and “revolutionize” transportation.