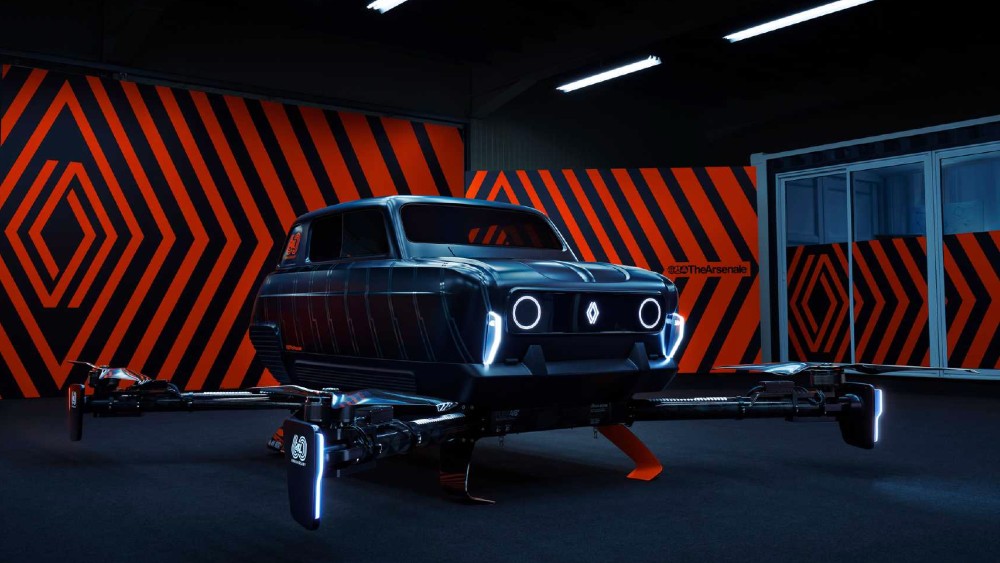 Forget the time-traveling DeLorean in “Back to the Future.” Renault has just released an eVTOL concept for the 60th anniversary of its highly popular 4L car, which saw 8 million units built from 1961 to 1992. The French auto brand partnered with design firm TheArsenale to create the Air4 quadcopter, a modern but slightly campy version of the iconic 4L.

“Air4 is a symbol of independence and freedom, born out of the realization that traffic is compounding, lives are grinding to a halt, and the world above us is unhampered,” said a company statement.

The aircraft’s design has modernized the carbon-fiber body with a softer, curvier shape, while incorporating four propeller arms with two propellers each. The body is hinged at the front to allow the pilot access to the cockpit. The rotors will run on electric motors that are powered by 90,000 mAh of lithium-polymer batteries. It even has cool, stylized LED lights.

The body of the stylized 4L is fixed to a quadcopter drone.  Courtesy Renault/TheArsenale

The design team estimates that the Air4 could have a top speed of 58 mph and 2,297-foot flight ceiling, which would be enough to leave traffic jams far below. TheArsenale notes that its thrust is 209 lbs. per propeller for a total lifting capacity of about 840 lbs.

“After 25 years of forward-looking research, we believe that the icons of car culture are eternal, whether on earth or in the air,” said Patrice Meigna, CEO and founder of TheArsenale, in a statement. “For 60 years, Renault 4 has been driven by ordinary people who make it extraordinary.”

Though only a concept, the AIR4 has already taken flight. It will be displayed at the Atelier Renault museum in Paris and next year visit Miami, New York and Macau.

The Air4, which will remain a concept, will be displayed in Paris and next year visit Miami, New York and Macau.  Courtesy Renault/TheArsenale

Renault joins other car manufacturers like Hyundai and Honda in releasing eVTOL air-taxi plans for the future. The move could help push other European auto manufacturers to release their concepts.