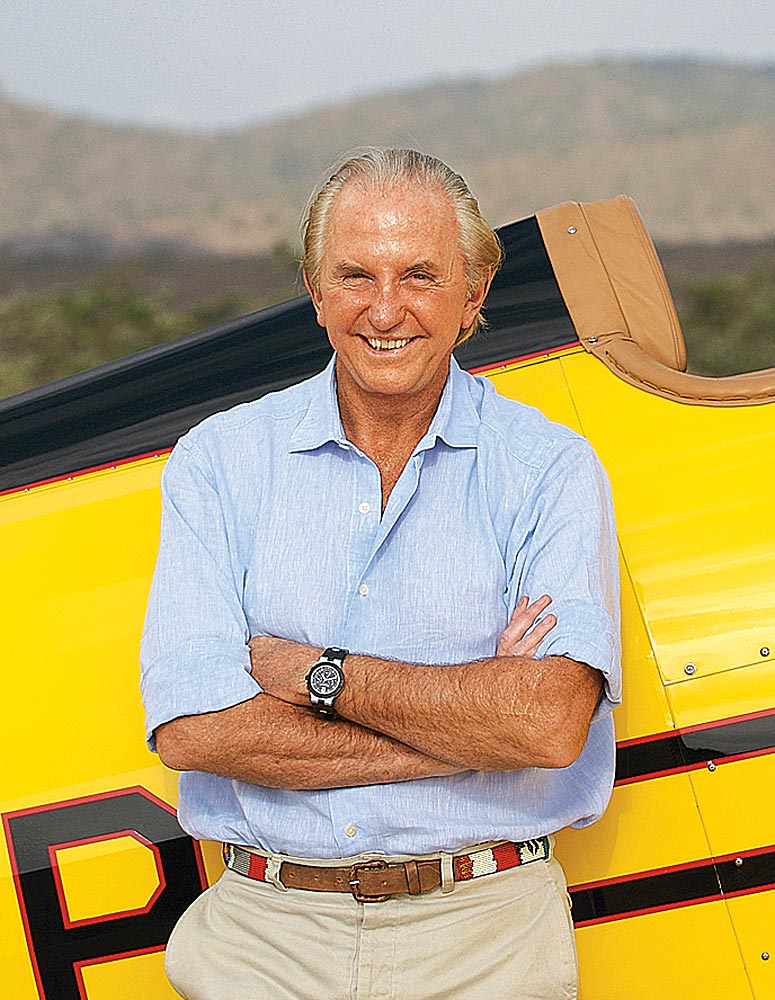 Robbb Report spoke with Abercrombie & Kent founder Geoffrey Kent in Los Angeles during a recent promotional tour for the company’s new Abercrombie & Kent Residence Club, which launched this past fall. A tireless traveler 220 days out of the year, he had just returned from a trip to Rio de Janeiro, where, in his spare time, he maintained his year-round tan while hang gliding onto the beach. “I don’t like to be bored during the day,” he said. “I like to fill my days with adventure and my evenings with good food, good wine, and stimulating conversation.” Over the span of his 66 years, the adventure-seeking Kent has, among other things, served in the British cavalry, won the U.S. Polo Championship twice, and raced Maseratis in the south of France.

You obviously have an affinity for fast machines.

Yes. I love speed. In 1959, when I was 17 years old, I rode two motorbikes—a Triumph Speed Twin and a Steyr-Daimler-Puch, a 250 cc split-single engine—from Nairobi to Cape Town, and became the first person in the world to do that. Recently, I acquired a Bentley Arnage T 9. I’ve had a Bentley ever since A&K started to do well. I love them. They’re fast, they’re sporty, they’re safe. Two years ago, in Cape Town, I took on 5 g-forces in an English Electric Lightning plane [a supersonic fighter aircraft of the Cold War era] without a g-force suit. I went up to 40,000 feet with an F-16 pilot in a single minute, spiraling part of the way up and doing a little loop at the top just for fun. Then we went up to 65,000 feet, where we were at a Mach speed of 2.2 and saw the deep purple of the sky and the curvature of the earth down below—that’s about as close to space as you can get. Then we came down, about 100 feet over the sea, at just under Mach 1. That’s when the pilot said to me, “This is the moment that you don’t want me to sneeze.”

How did you prep for all those g-forces?

You could not do that if you were not physically fit. Age, as you know, is just a statistic. I’m 66 years old, and I’m still running my five miles, four days a week. You just have to be totally, completely fit. To prepare for these sorts of flights, you also need to learn how to eject from your seat—on the ground and in flight. The other way to prepare is not to eat for 24 hours.

Tell us more about your plans to travel into space.

We hope to be doing something with Bigelow Aerospace. We want to go up to space somewhere around 2015 to study climate change. The actual space station—a prototype—is up there now. We were going to use Soyuz, the Russian spacecraft, as a means of conveyance, but that is no longer possible because they are already booked with other plans. So Robert Bigelow is now working with NASA to find other means to get us up there. That will take about four to five years to flesh out, at least.

Do you have a favorite among the less extreme vacation spots?

I really like one of the A&K villas on the Côte d’Azur. There, I can windsurf and just relax and drink espressos. The other one would be one of our cabins in Botswana. As for hotels, I know this sounds weird, but my favorite is probably the Beverly Hills Hotel. I’ve been going there for about 20 years—I love it. I also like the Hotel Fasano in Rio de Janeiro. Another one I like is the Four Seasons Cairo in Giza. Oh, and I really like the Taj Lake Palace Hotel in Udaipur [India]. To have dinner there on the top of the roof—it’s just spectacular.