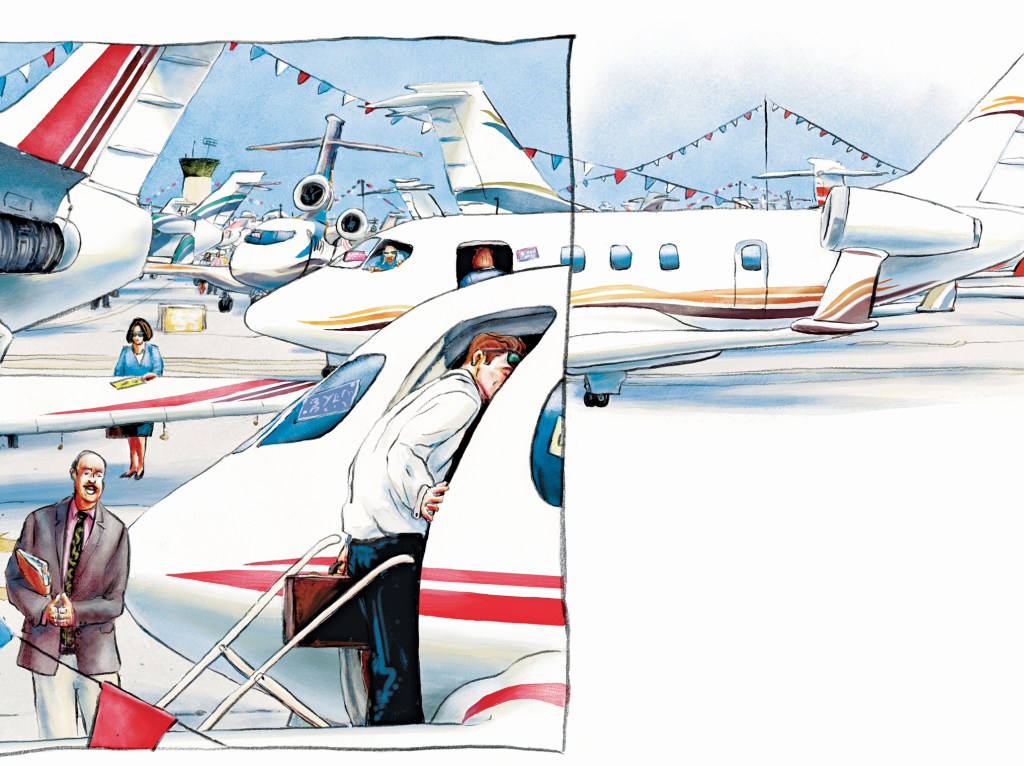 The economy has rebounded, stock prices are soaring, unemployment is down, but the secondary-aircraft market is still a buyer’s market. Prices of pre-owned aircraft plummeted during the recession that started in 2008, largely because of the flood of planes from owners who could no longer afford them or could no longer justify the cost of owning them. In the ensuing years, the supply of pre-owned aircraft has remained high, and so prices have stayed relatively low. According to Jetnet, a company based in Utica, N.Y., that tracks the private- and commercial-aviation markets, the average asking price for pre-owned private aircraft 15 years old and newer in 2013 was $8.7 million, compared to $10.9 million in 2009.

The attractive pricing has deepened the pool of prospective buyers, which now includes people who are new to jet ownership and people who previously were more limited in the type of aircraft they could afford. “When you look at small-, mid-, and large-cabin [pre-owned] planes, prices are as low as they’ve ever been, generally speaking,” says Robb Report Private Aviation Advisory Board member Keith Swirsky, the president of GKG Law and the chairman of the firm’s business aviation group and tax group. “As they continue with that downward trend, all of a sudden you have a buyer who can afford a large-cabin plane or a new buyer who’s buying into a small-cabin plane.”

The buyers acquiring larger aircraft may be adding to the supply of secondary aircraft by selling their current jets as they upgrade, but both types of buyers are increasing the overall demand for jets, which eventually could transform the buyer’s market into a seller’s market. “Guys selling now are doing so to move up, whereas during the recession they were moving out,” says Dave Richter of Jeteffect, a jet-sales and -acquisitions company headquartered in Long Beach, Calif. “We’re starting to see some equilibrium in the market. People have money again, and the stigma of having a business aircraft has started to recede.”

Swirsky says that, in many cases, owners are upgrading or buying their first jet because they can, not because their needs dictate it. “I have more and more clients who tell me that their utilization hours are 50 to 100 [per year], and that’s a substantial underutilization of that aircraft,” he says. Swirsky recommends jet ownership if a client flies 200 hours a year or more. He notes that other consultants’ recommendations range from 150 hours to 250 hours.

When an aircraft is underutilized, the owner usually will make it available for charter, seeking to offset some of the fixed costs of ownership. However, like the secondary-aircraft market, the charter market is glutted. At the start of this year, the General Aviation Manufacturers Association forecast that the number of business jets available for charter in 2014 would increase by more than 400 compared to 2013 and by nearly 1,000 compared to 2012. Consequently, many jet owners may not realize the revenue that they anticipated from the charter market.

Bargains Can Come at a Price

Swirsky says that though prices of pre-owned aircraft are relatively low in the United States, buyers have been purchasing jets from international sources, particularly in Western European countries, where the struggling economies have further depressed aircraft prices. “We’ve always had those transactions but never to this volume,” he says.

Swirsky does not discourage buying from an overseas source, but he cautions that international transactions can involve unique challenges. The buyer’s broker will need to find an inspection facility that he or she can trust. That is easier to do for domestic transactions, because brokers usually have worked with the U.S.-based inspection facilities. Brokers also must learn the country’s deregistration process, and not all countries have regulatory agencies like the Federal Aviation Administration, which will provide a prospective buyer with an aircraft’s ownership history.

Swirsky also says that, because of time differences, the involvement of third-party financial institutions, and other factors, the time required to finalize an international sale can be double or triple that of a domestic sale. Nevertheless, he says, buyers are willing to accept those delays because the cost savings can be significant.

Jay Mesinger, a jet broker based in Boulder, Colo., says the prices of pre-owned aircraft in Western Europe are generally only 5 percent to 10 percent lower than they are in the United States. He says buyers are more attracted by the volume of available planes than by their prices. “It’s not so much the financial savings, although that can occur because of a desperate seller,” he says. “Two years ago, Europe started to go through what we went through five years ago: Every fifth airplane that was registered in Europe was for sale. That created a lot of extra supply in our industry. It’s just the sheer supply available to a buyer that creates the motivation to look beyond our borders.”

The Cost of Preventing Obsolescence

A pre-owned aircraft may come with a low price, but if it is equipped with obsolete avionics, the buyer may have to spend a seven-figure sum upgrading the cockpit. Robb Report Private Aviation Advisory Board member Lee Rohde, the president and CEO of Essex Aviation Group, says that up-to-date avionics will enhance the owner’s experience with the aircraft, and it will make the plane more appealing on the charter and resale markets.

Rohde notes that the market values of some older aircraft may be too low to justify the cost of equipping them with new avionics. “We went through the engine-killer phase,” he says, referring to the period when the cost of engine modifications relegated some older planes to the scrap heap. “Now we’re going to go through the avionics-killer phase.”

Advisory Board member Bill Quinn, the president of Aviation Management Systems, concurs with Rohde. “Our whole airspace is changing,” he says. “If you want to operate above 18,000 feet or in the 29,000- to 41,000-foot range, there’s some pretty expensive equipment that you have to put into your aircraft. When you have to spend $1 million on airplanes that are $20 million or more, it’s not as big of a deal. But on smaller, lesser-priced aircraft, it is. Technical obsolescence is going to push a lot of older aircraft to the boneyard. To meet these requirements in smaller and even midsized jets, it just doesn’t make economic sense.”

Retrofitting may be attractive now because of the wide gap between the prices of new aircraft and pre-owned aircraft, but if that gap closes, adding new avionics will make less sense financially. “When manufacturers are putting out new airplanes with higher prices, when their order books are solid and backlogs are good, that’s what stimulates the interest in retrofitting older aircraft,” says Quinn. “But when those prices [of new aircraft] start eroding the margin between what you can buy a pre-owned aircraft for, the idea of retrofitting loses some of its appeal.”

The Downside of Demand

According to Robb Report Private Aviation Advisory Board member Peter Agur, the chairman of the aviation-consulting firm VanAllen Group, the recession that began in 2008 created a full-on depression in the private-aviation industry. He says that the recent increases in production and product designs—and in the capital investment necessary for both—are great signs for the industry. But he is bracing for the backlash that can come when increased demand is introduced to a market still recovering from a major setback. “The manufacturers went through a reduction of production schedules, and now they’re adjusting to selling to a lead time,” he says. “So we’re likely to see some delays in deliveries and issues with the quality of the products being delivered. Anytime you push a manufacturing group, their error rate goes up.”

Agur is not suggesting that the aircraft produced will be unsafe; he is saying they could be unreliable. He anticipates a greater risk of service interruptions because of malfunctioning systems that need to be fixed.

Agur’s safety concerns involve private-aviation pilots. When demand for commercial airlines picks up, he says, those companies aggressively increase their workforces. The FAA projects that the number of airline travelers will grow steadily over the next 20 years and relatively rapidly over the next five, and Agur says the airlines are responding accordingly. “The airlines are hiring at a rate we haven’t seen in a number of years,” he says.

This could be a concern for customers of private-aviation providers, Agur says, because the airlines have the leverage and capital to secure the best talent at the expense of private-aviation businesses as well as regional air carriers. Private-aviation businesses could be hard-pressed to retain experienced personnel, including pilots. “Anyone can put together a gorgeous marketing piece describing beautiful airplanes and great destinations, but the point that’s going to be most crucial for the customer is how they’re going to do this with the staff that they have,” he says. “Seventy percent of professionally flown aircraft accidents occur because of human error. That means it’s absolutely critical that the customer selects service providers who have extraordinarily competent and experienced staff.”