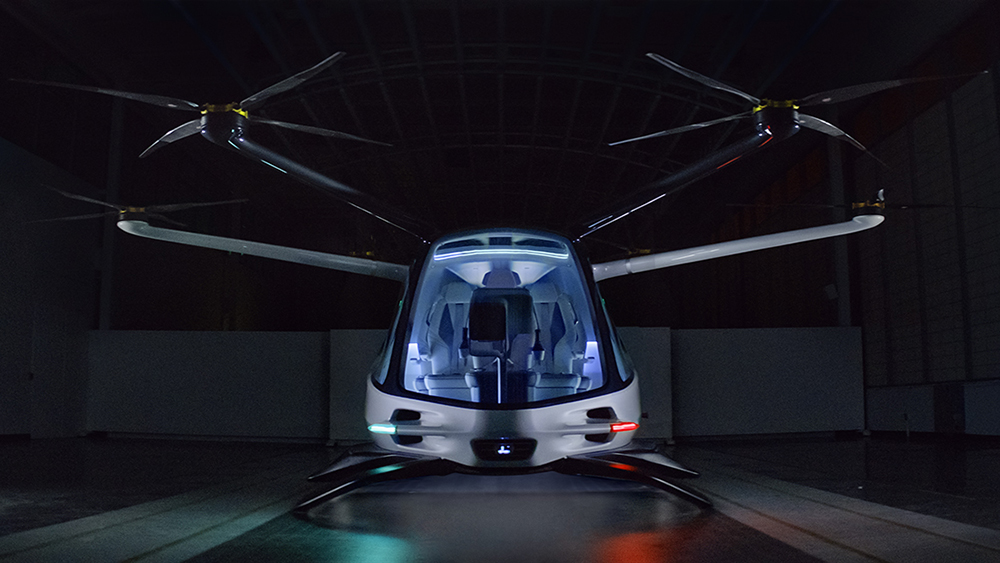 At the BMW’s Designworks innovation studio in Newbury Park, Calif., Alaka’i Technologies unveiled its revolutionary Skai aircraft. The vehicle is innovative in manifold ways, but most saliently in its powertrain: The Skai will be powered by six rotors each mated to an electric motor, all fueled by a Hydrogenics-sourced hydrogen stack. This makes the Skai the world’s first hydrogen-fuel-cell-powered air-mobility solution, allowing the five-person vehicle (up to 1,000-pound payload) to fly up to 400 miles with zero emission (assuming the hydrogen is green, of course).

As the electric vertical and takeoff landing (eVTOL) vehicle gets its lift from rotors, it’s technically an aircraft—a rotorcraft to be specific, but not a helicopter because it lacks a tail rotor. That said, Alaka’i execs prefer the far more ambiguous term vehicle, because they see the Skai more holistically as a personal-mobility solution.

The Boston startup’s goal is as simple as it is ambitious: to make air mobility both accessible and environmentally sound. That’s a tall order considering both qualities are currently far from attainable for traditional aircraft. Boasting executives, engineers and consultants from a combination of aviation, tech and automobile industries (including Dr. Bruce Holmes, former chief strategist with NASA), it’s evident Alaka’i conceives the Skai as not only a plane/helicopter replacement but, from a big-picture standpoint, an eventual solution for commuter cars as well. Alaka’i Technologies CEO Steve Hanvey repeatedly referred to his product as “Traveling in the third dimension.”

While initially set up to be piloted by a human for legal reasons, the Skai can already be flown both autonomously and remotely. Due to its clearly disruptive nature the latter two may take years to come into play, but as a piloted vehicle the Skai could be flying within the year.

And due to fewer regulations when there are no passengers involved, its initial duties could range from carrying cargo to disaster relief. It could quickly fulfill medical, public service, emergency and military applications in remote or difficult to reach regions.

Its design is both minimalist and innovative, with a unique six-rotor architecture: four props branching off the rear and two up front. To optimize passenger comfort, its rotors are placed to minimize the effects of noise and vibration on the cabin. This is just part of the luxury experience Alaka’i demanded for its product, aided by an airy greenhouse featuring 180-degree panoramic views for all five passengers. For added safety, the Skai even features an Airframe Parachute like that innovated by Cirrus.

There are also ergonomic leather seats, ambient lighting, an Alcantara headliner and device-charging capabilities at each seat. While clean and airy, the quiet cabin is far from sumptuous—but that minimalism is purposeful.

“This is not business-class travel, it is more a premium economy seat,” explains Holger Hampf, president of Designworks. “We found for the duration of these flights you need a certain comfort but you don’t need much more, otherwise it negatively impacts weight.” Considering the Skai maxes out at four hours of flight time, the ‘less is more’ sentiment makes sense.

“It’s not only a new type of craft, it’s also a new brand,” continues Hampf, who supervised the overall design of the Skai. “When you think about the aesthetics—the form, the styling, the size of it —you don’t want to create something that is foreign, or alienating, because that would result in not trusting the vehicle from the get-go. We don’t want people asking, What is this thing? But if you make it too familiar it wouldn’t justify the Skai being a new service, a new type of passenger-mobility craft. So you really have to find a middle ground between something that is not too futuristic, but also not too familiar to the viewer.”

Of course pricing is yet to be announced, but CEO Hanvey promised that in the long term, aka when the Skai hits its targeted level of volume production, pricing will mirror that of a luxury car. “The going-out-the-door price is far less than you think,” he promises. “It’s not conventional airplane or helicopter prices. Why, you may ask? Because it’s simple, it doesn’t have many moving parts.”