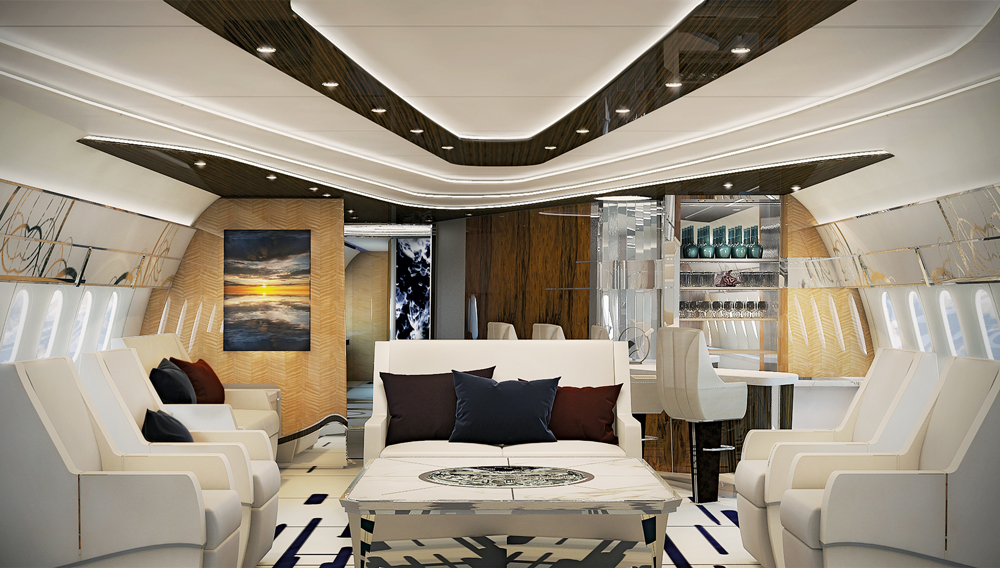 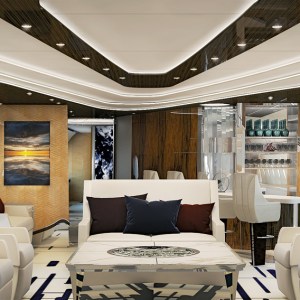 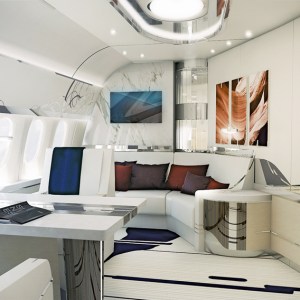 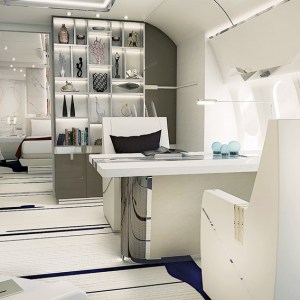 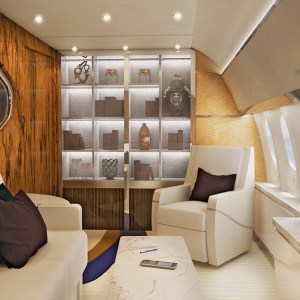 Just as jet manufacturers continually seek to produce aircraft with more powerful engines and longer range, the companies that design custom interiors compete to create the most efficient, attractive, and comfortable cabins. Their designers, engineers, and customer-service specialists will work with you to meet your requirements for a living space that allows you to conduct business while in flight or just sit back and relax.

These shops can take a green jet (one with a bare interior) straight from the factory assembly line or an older jet ready for refurbishment and create a design that incorporates the lightest possible materials and makes the most use of the cabin’s limited space. The shops also must comply with strict international aviation standards to ensure that all of their constructions and materials are safe and functional, even when the jet is traveling at speeds faster than 550 mph and altitudes as high as 40,000 feet.

Weight saving is essential. Every ounce shaved off the interior allows for additional fuel capacity, which will extend the aircraft’s range. Saving weight also makes the aircraft more fuel efficient, which reduces the operating costs. According to an estimate that Colin Sirett, the head of research and technology for Airbus in the United Kingdom, gave to BBC News last year, an extra kilogram can translate to roughly $1 million in operating costs over the lifespan of an aircraft. Though he was referring to airliners, the custom shops nevertheless understand that every pound counts with a business jet. “We found that we could get better soundproofing with less weight by layering and staggering the materials,” says Daron Dryer, the vice president of engineering at Comlux America, an Indianapolis-based company that performs VIP interior completions and refurbishments on large aircraft built by Boeing, Airbus, and other manufacturers. (The company is part of Comlux the Aviation Group, an international charter-service provider headquartered in Zurich.)

The custom shops also have to keep up with the latest technology and be able to incorporate it into their designs. In this way, they will meet the expectations of jet owners—and charter customers, who can offset some of the costs of ownership. “When you’re driving up to your aircraft in your modern automobile, you don’t want to take a step back in time when you get on your airplane,” says Dryer. “We have to take all that integration, all that easy user interface that our customers would expect in a high-end automobile, and surpass it.”

He says that new materials and new products also are creating more possibilities for multifunctional interiors. “The aircraft-grade galley components, like coffee makers, espresso machines, and even cooktops, are becoming lighter and more aesthetically pleasing,” Dryer says. “Before we had to hide them behind partitions and walls; now we can integrate them into the cabin, so you can use the same space for dining and working and socializing. These new components help to create an open and modern look, with a few large spaces instead of a lot of smaller rooms.”

Comlux is among the companies that foresee a novel use for organic light-emitting diode (OLED) screens, the kind used for TVs. Custom shops will be able to create large simulated windows that give you the illusion of looking through the fuselage of the aircraft and into the sky. Presently, they are used for more mundane purposes. “The screens now are so thin we can apply them to a surface to create a touchscreen or to project a work of art,” Dryer says.

Carbon fiber and other composite materials have enabled engineers who worked on the Boeing 787 Dreamliner and the Airbus A350 to minimize the aircraft’s weight while enhancing its structural strength. These materials now are becoming popular for cabin designs. Flying Colours Corp., a company headquartered in Ontario that maintains and refurbishes aircraft and designs, completes, and converts interiors, last year created a predominantly carbon-fiber interior for a client’s Bombardier Challenger 850. According to the company, the client selected the material for purely aesthetic reasons, choosing to replace the wood veneer for the tables, galley surfaces, bulkheads, and sidewalls with black and gray accent colors.

“We’re also seeing many requests for lightweight real granite stone flooring in a multitude of colors,” says Kate Ahrens, the vice president of design at Flying Colours. Other design trends include the use of vibrant colors for leather upholstery and carpeting. High-sheen leather finishes also are in vogue, Ahrens says. “Clients want to be more daring with seat designs and leather selections overall.”

The use of three-dimensional printing has expanded the limits of cabin designs. Greenpoint Technologies, a company based in Kirkland, Wash., that specializes in designing and manufacturing interiors for Boeing Business Jets, has embraced this technology. (The company’s sibling business, Greenpoint Aerospace, refurbishes and maintains business aircraft made by Gulfstream, Bombardier, Beechcraft, and other manufacturers.) Greenpoint’s engineers create 3-D models on a computer, then export that design directly to a 3-D printer to fabricate a wide variety of parts. The process is especially useful—and cost effective—for creating custom cabin features with complex designs.

Popular features with Greenpoint clients include lightweight stone veneers, hardwood flooring, doors controlled by electric sensors, and walls covered with OLED digital screens, like the ones that Comlux envisions serving as virtual panoramic windows in cabins.

“Ultimately, we’re trying to give the client the same lifestyle in flight that they would have on the ground,” says Comlux’s Dryer, “and without their having to make any sacrifices just because they’re traveling in a jet.”

At the start of the jet age, Bill Lear and other aircraft builders counted on celebrity endorsements—not just of their products but also of the lifestyle that went with owning a private jet. Frank Sinatra became an early adopter 50 years ago, in 1965, when he took delivery of one of the first examples of the Learjet 23. He named it Christina II, after his youngest daughter. A week after taking possession of the plane, Sinatra flew it to the Newport Jazz Festival, where he resurrected his singing career.

By modern standards, the Learjet 23 did not have a lot of space, just enough for two leather seats in back, a port-side seat near the door, a three- or four-person divan on the starboard side, and, on Sinatra’s plane, a pullout card table. His Learjet also included a liquor cabinet, the contents of which helped ease Sinatra’s fear of flying. (Before every flight, his valet—an ex-Navy officer—would call airports along the route to double-check weather reports.)

The jet’s real appeal to Sinatra and his Rat Pack friends was that it could shuttle them quickly between Los Angeles, Las Vegas, and Sinatra’s home in Palm Springs. With a top speed faster than 500 mph, the jet enabled hasty exits, which proved handy the time that Sinatra and Dean Martin got into fisticuffs with fellow diners at the Polo Lounge in Beverly Hills during a birthday celebration for Martin. When the plane picked them up at a nearby airport the following morning, Martin sported a black eye and blood on his shirt, while Sinatra wore a makeshift sling on his arm. No matter. They were up and away in a few minutes, heading to another state to wait out the news cycle and let their injuries heal out of the public eye.

Sinatra and Mia Farrow flew in the jet to the south of France for their honeymoon. He loaned it to Elvis Presley on the occasion of his elopement with Priscilla. Marlon Brando and Sammy Davis Jr. took it to Mississippi to join Martin Luther King Jr. in a civil-rights march, and Dean Martin loved to take it to movie sets. Sinatra sold the Learjet in 1967 and purchased a Gulfstream II.

Elvis was so impressed with jet travel that he bought two jets for himself. The first was a Corvair 880, a narrow-body airliner that he acquired 40 years ago, in 1975. He paid $250,000 for the plane and then spent more than $350,000 customizing the interior. When completed, it featured a forward lounge with club and divan seating, a conference room and dining area with its own refreshment center, a bedroom with a queen-size bed, and a private bathroom with a gilded washbasin and faucet. The jet’s videotape system linked with four television sets, and the audio system included 50 speakers. Like Sinatra, Elvis named the plane after his daughter, dubbing it Lisa Marie.

Shortly after buying the Corvair, he purchased a Lockheed Jetstar, for $900,000, to use while he waited for the work on Lisa Marie to be finished. The interior of that plane, called Hound Dog II, was far more conservative. It sat 10 passengers in a four-seat club area up front and a divan and two club seats in the rear.

Lisa Marie made its final passenger flight in August 1977, when the actor George Hamilton, Priscilla Presley, and the jet’s namesake flew from California to Memphis for Elvis’s funeral. —Michelle Seaton