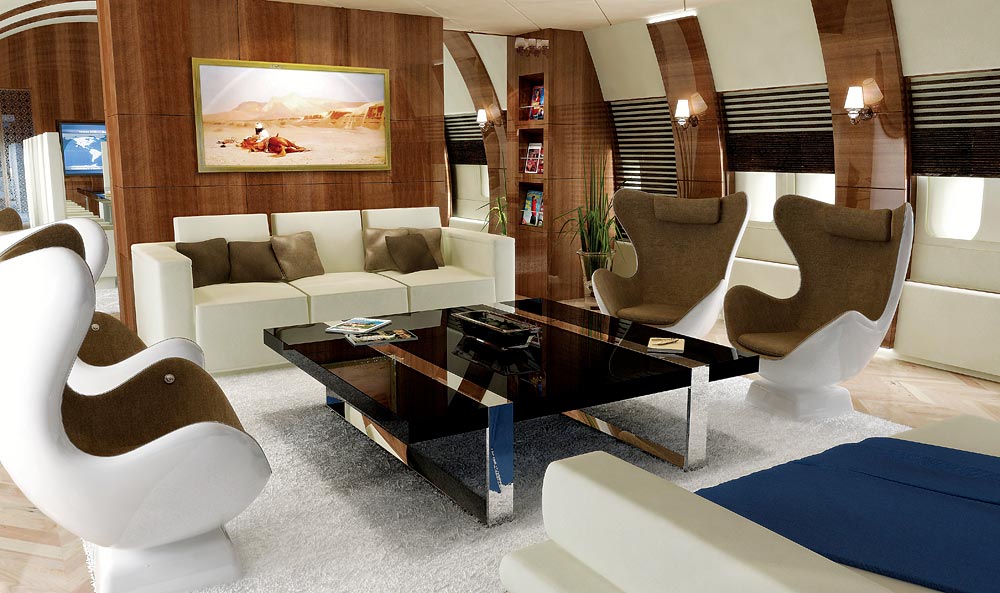 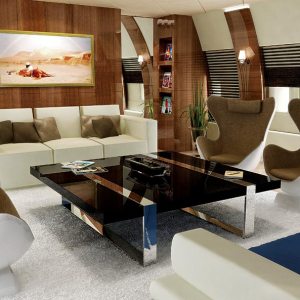 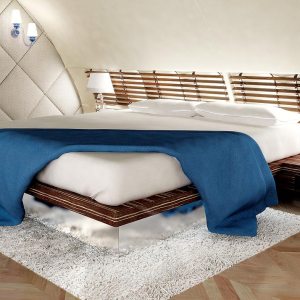 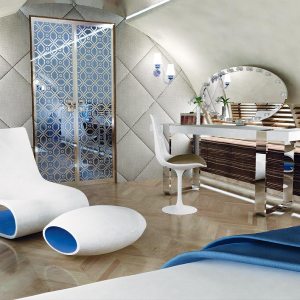 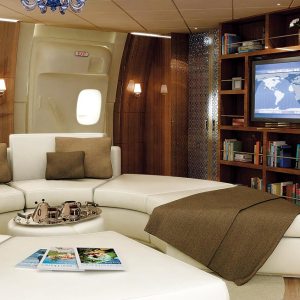 Among the more memorable amenities that Edése Doret created recently in the interior of a private Boeing 747-400 was a cocktail bar that could disappear from view at a moment’s notice. “My client, a Middle Eastern businessman, enjoys alcohol, but drinking is not allowed in his country, so he wanted a secret space built onboard to hide the bar,” says the Haitian-born, New York–based designer. So Doret constructed a bar behind a bookshelf in a main-deck lounge that could be opened by flipping a hidden switch. “The owner has access to it during flight,” he explains, “but it is completely disguised when the religious police get on board to inspect the plane.”

Such requests are becoming routine these days for Doret and other residential and industrial designers, who now find their services in greater demand from jet owners who are forgoing the bland blue or beige cookie-cutter designs offered by aircraft manufacturers. These individuals are opting instead for highly customized interiors that match their personal tastes and aesthetic passions.

Bespoke furnishings, intricate wall coverings, plush handmade carpets, and priceless works of art now grace the interiors of private aircraft. “We’re using more materials like stone, wood, and sometimes leather on floors; various metallic finishes on bulkheads; and different metal textures on the doors,” says Doret, who notes that he and other designers are moving away from furniture built into side walls—as in a Winnebago, he observes wryly—and toward freestanding pieces more reminiscent of those in an actual home. (For safety reasons, FAA regulations still require that aircraft furniture be bolted to the floor.)

Doret says some jet owners are also making requests that seem wholly impractical. Stripper poles, skylights, door-size windows, and see-through floors are popping up on client wish lists. “I was told by a very credible source about one individual who supposedly had a lap pool in the back of his airplane,” he says.

Yet for all the requests that must go unmet, many more do make the final cut. Upgraded entertainment systems, including plasma movie screens, live television, and Internet access are de rigueur on many custom aircraft these days. Elevators are finding their way onboard aircraft as well. Doret recently designed a whirlpool tub for the interior of a private, wide-body Airbus. “We are treating it as we would a shower, by enclosing it and connecting the drain to the seat-belt call light,” he explains. “The water immediately drains into an empty, self-contained gray-water tank when the light turns on.”

While trends in aircraft interiors may be moving toward more homelike styles and amenities, a design should not simply replicate the look of an owner’s house, designers say. “Clients use their yachts and planes because they want to experience something different,” says Andrew Winch, a London-based yacht designer whose company, Andrew Winch Designs, began blueprinting private aircraft interiors in 2001. “We have clients who own a cozy New York apartment, an English manor house, and a contemporary home in Florida, and they don’t want these properties to be the same,” he says. “Why would they want that for their plane?” Winch adds that quality is the only decorative common ground his clients request for their aircraft, yachts, and homes.

Los Angeles–based designer Michael C.F. Chan recently received his first commission for a private aircraft, a 120-foot Embraer Lineage 1000. Chan believes that jets and homes engage different emotions in their owners, and therefore require different decorative approaches. “For example, many people have a fear of flying,” he says. “While a design cannot cure that fear, it can help alter an individual’s state of mind by employing calming colors and a palette conducive to relaxation.”

Designer Craig Wright had a quiet yet elegant interior in mind when he agreed to overhaul the interior of a 40-year-old Boeing 727-100 for his client, a Southern California real estate developer. Recalling his initial inspection of the plane, Wright says, “It was ugly. . . . The decoration needed to be reworked.” He had done schematics for the interiors of several Gulfstreams over the course of his 40-year career, but this was the first time he had actually turned a bland commercial jetliner into a luxurious, airborne penthouse.

“When you buy a plane, the manufacturer typically provides several design options and, as is often the case in decorating, they always think more is more,” Wright says. In the 727-100, he took a subtler approach that he felt would make the aircraft feel more intimate. “We were inspired by old, grand steamships—the Normandie in particular—so the plane has an Art Deco feel.” Wright bought at auction an original Jean Dunand panel used as a model for the grand relief in the SS Normandie’s smoking room and framed it for the plane’s main lounge.

For the rest of the interior—a forward kitchen with a galley and a bath; a lounge; another galley; two staterooms separated by a bath; and a rear lounge with a bath—Wright avoided straight lines. “A plane is a free-form, boat-shaped object, and if you put lines on the floor, it just highlights the fact that you’re not in a traditional space,” he says. “So I designed a rug, inspired by one on the Normandie, that accentuates the absence of parallel lines.” He also used time-tested natural materials like leather and mohair to create a more comfortable feel.

doret says that new aircraft owners are often naive about the costs associated with creating a custom interior, and about the time required to complete a project. “Depending on the client and the size of the airplane, it can easily take six months for the client to make a decision on a design,” he says. “Then it takes a month to prepare the engineering package before we send it out to competing facilities to bid on the modifications. If we’re designing a [Boeing Business Jet] it may take as long as a year, and a 747 can take even longer.”

Furthermore, Doret estimates that a custom interior for a massive Airbus A380 would run $150 million or higher. Though fees in this range might give pause to some, the owners of large aircraft, who often entertain during flights, rarely cut corners when personalizing their high-flying retreats. One of Winch’s first projects when he began his career as a design apprentice almost three decades ago involved assisting in the renovation of the interior and exterior of a Boeing 727-27 owned by the late billionaire Malcolm Forbes. Forbes requested, among other things, hull storage space for two large hot-air balloons. He also wanted the words “Forbes Capitalist Tool” painted in bright gold lettering across the plane’s tail. “He flew that plane all over the world as a vehicle for promoting his business,” Winch says. “Forbes used the balloons, I believe, to do crazy things like fly over the Great Wall of China.” Winch notes that his current clientele—many of whom were friends or business associates of Forbes—”are much more discreet about their arrivals and departures.”

According to Winch, one of the biggest trends in aviation design is not seen, but experienced. The designer recently asked a client to describe the A380 in one word. Without hesitation, the client replied, “Quiet.” Winch says, “There is something special about a plane in which you can enjoy a beautiful, relaxed dinner or watch a movie without hearing the drone of the engines.” The latest private and commercial aircraft are much less noisy than their forebears. Still, designers regularly utilize sound-absorbent materials in their interiors to minimize intrusive noise.

Winch also focuses a great deal on seating—especially on the chair that will be occupied primarily by the plane’s owner. “It’s his personal throne,” Winch says, “so we want to make sure it looks the most important, and that it fits him like a glove. If a guy is going to spend $50 million on a plane, you better make sure he looks and feels good in it.” Winch also likes to incorporate at least one electronic massage chair into each design scheme. “It’s not a primary chair, so I don’t put it in a place of importance. Rather, I put it in a location where a guest will feel comfortable falling asleep,” he says.

Wright didn’t feel the need to create a special chair for the owner of the reconfigured 727-100, but he did appoint the cabin with items that are among his personal favorites, including fine linen tablecloths, heavy Lalique stemware, cashmere travel kits, and other amenities. On his first overnight flight in the redecorated plane, Wright recalls waking up and thinking, “These sheets are fantastic, and the bathrooms even have my favorite soap.” When he mentioned to his client’s wife how comfortable he was in the plane, she replied, “Craig, of course you are. You selected everything.”