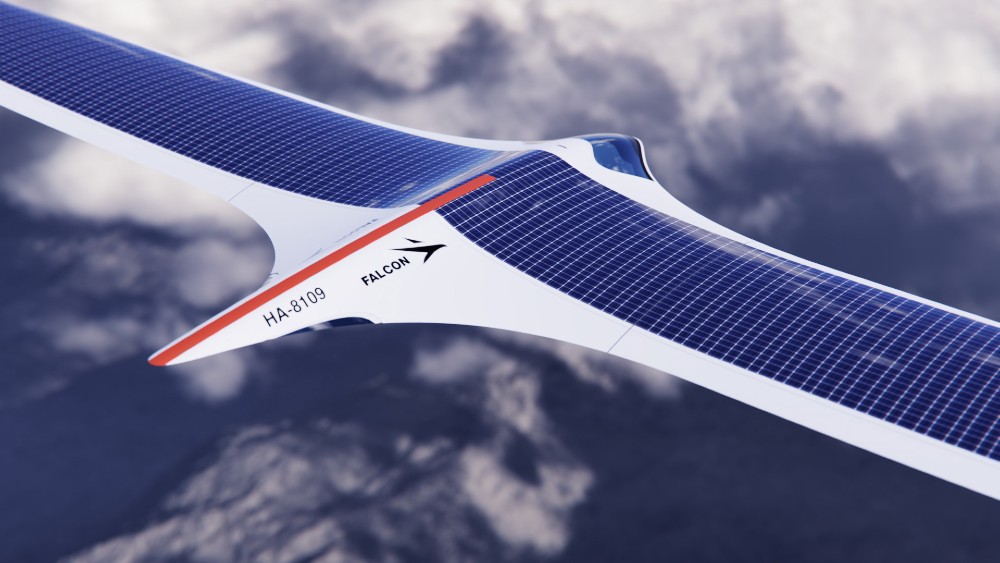 The Falcon Solar looks like a superhero’s jet, running exclusively on solar power and shaped like the bird of prey it’s named after. Despite having no visible propulsion system for takeoff, and no flaps or ailerons in the wings for lift or turning, could this experimental design inspire manufacturers to move forward with aircraft powered by the sun? It will take a lot more tech to get there.

“We want to bring a new perspective to solar sustainable aviation,” Laszlo Nemeth, whose Budapest-based firm Lasko Design created the concept, told Robb Report. “I believe that modern technology is sufficiently advanced to allow us to fly on solar power. This could be a reality before self-driving cars.”

The aircraft’s shape is reminiscent of a delta wing aircraft, used in military and supersonic jets like the Concorde, but the Falcon Solar takes it a step farther with curved wings and an elegant, bird-like fuselage. “Birds of prey are fast and nature has provided engineers and designers with good inspiration for centuries,” says Nemeth. “Today we can fly above the speed of sound but at what environmental cost? Might we be able to combine the efficiencies of birds in flight with higher speeds?”

“The design breaks with conventional aircraft design and uses the advantage of flying wings,” says Nemeth. “The shape is unique in that the fuselage also generates significant lift while providing a surface for the solar panels.” The design is aimed at “passenger transport in a more sustainable and efficient way,” he adds. The design team includes engineers that are pilots with more than 20 years of flying experience.

It’s not clear whether Falcon Solar will ever get off the ground, though Nemeth insists that there is more to come. “The concept deliberately does not show everything, especially the propulsion system,” he says. “From an aerodynamic point of view, the aircraft is feasible and has good characteristics.” The design is going through computation fluid dynamics optimization and a smaller remote-controlled model, with a 16-foot wingspan, is in the works.

“The first test flights will be for long duration and speed demonstrations,” says Nemeth. “The second objective is the implementation of fully automatic aerial recharging.”

The Solar Impulse 2 successfully completed a slow-but-methodical trip around the world in 14 months in 2016. The experimental aircraft traveled 25,000 miles around the world, with 550 miles in the air. Bertrand Piccard came up with the idea for a solar-powered airplane 10 years after his 1999 nonstop flight around the world in a hot air balloon. Solar Impulse 2 had 17,248 photovoltaic solar cells, each one the size of a human hair, built into the wings to recharge the batteries and power the electric motor.

A year earlier, the Sunseeker Duo made a successful flight across the US and then later, over the Alps. Solar Flight Inc., with facilities in Germany and California, continues to update the Duo with new avionics and a longer range.

The elegant look of the Falcon, says its designer, is more for “safety, efficiency and stability, not exceptional maneuverability.”  Courtesy Lasky Design

Despite the success of these experimental aircraft, solar is not envisioned as the sustainable mode of mass transport, especially for commercial and private air travel. Solar-powered aircraft can carry limited payloads and speeds are also much slower than conventional aircraft. The Solar Impulse 2, for instance, flew at an average speed of 43 mph, so a nonstop flight from New York to Los Angeles would take three days.

Still, solar aircraft use-case scenarios do exist, such as local tourism in very sunny areas (the higher you climb above the clouds, the better a solar aircraft performs) and unmanned aerial vehicles (UAV) for low-altitude aerial sensing.

The Falcon Solar from below.  Courtesy Lasky Design

Nemeth is certain that Falcon Solar will be more than a cool concept. “Flying above the weather in the jet stream and the strong winds, as well as darkness at night, are what cause problems for contemporary solar-powered aircraft,” he says. “”How do we overcome these problems? Fly higher. Solar-powered aircraft typically fly at higher altitudes, whereas propeller propulsion is more likely to provide sufficient efficiency and use the energy from altitude to slowly descend in the evenings.”

The Hungarian design team even wants to go farther when it comes to recharging the aircraft in flight. “There’s a large amount of electrical energy in the air and clouds—lightning.”

Harnessing that electrical load to recharge the batteries could be a game-changer, albeit a terrifying one. “We can be a little crazier,” Nemeth adds, when it comes to leaps of technology—and faith.