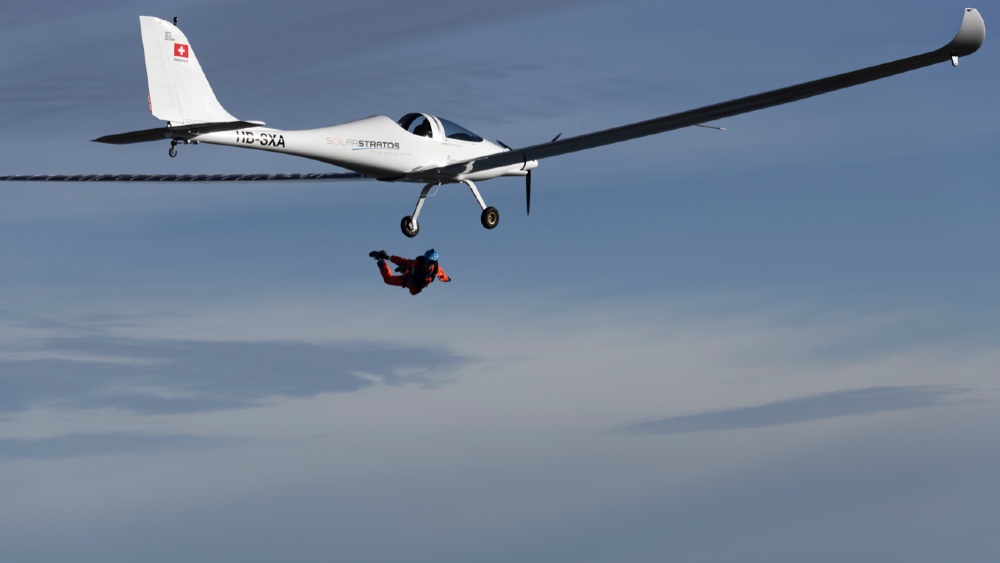 The SolarStratos, a 28-foot two-seater with an 81-foot wingspan, took off from Payerne, Switzerland, in the last days of August, using nothing more than the power of the sun. When it reached a height of 5,000 feet, its founder and co-pilot, Raphaël Domjan, jumped out, becoming the first person to successfully parachute from an electric aircraft.

“I am very proud of this achievement,” Domjan said in a post-landing statement. “Our aim is to demonstrate the potential of solar energy and electric mobility. It is a message of hope for future generations: tomorrow they will still be able to dream and carry out activities such as parachuting without greenhouse gas emissions and in absolute silence.”

It’s unclear if this was a “record” that anyone else was trying to set, but Domjan’s larger point holds up. SolarStratos is not the first solar plane, but it helps prove that solar aviation is viable and advances the technology for solar flight. The parachuting drop was one of about 20 hops the SolarStratos team had planned for the summer on the way to its ultimate goal: reaching near space.

The SolarStratos has 237 square feet of solar panels that connect to the lithium-ion battery powering the aircraft.  SolarStratos

“The next flights should take place early next year,” Bernard Schopfer, the project’s director of communications told Robb Report. “High-altitude flights will follow, with an attempt to reach the stratosphere most likely in 2022.”

Global air travel produces 915 million tons of carbon dioxide a year, more than 2 percent of all human-generated greenhouse gas, according to the Air Transport Action Group. Some forecasts predict that number could more than triple by 2050. That’s why getting a solar-powered plane to an elevation of 120,000 feet would be a record of note, especially since higher altitudes allow planes to reach higher speeds, while using less power.

It won’t be easy. The SolarStratos first launched in 2016, but after a stress test produced a crack in the wing in 2018, the project went on a two-year hiatus while structural redesigns took place. The improved version launched in July, using a 20-kW lithium-ion battery powered by 237 sq. ft. of solar panels. It weighed in at just 992 pounds. To keep weight down, the plane’s cabin is not pressurized, which means the pilot must wear a spacesuit and endure temperatures that could reach -94 degrees F.

The original design had stress cracks, so after a two-year hiatus, SolarStratos is flying again. It will attempt to reach the stratosphere in 2022 using only solar power.  SolarStratos

Bertrand Piccard, a fellow Swiss national who several years ago circumnavigated the globe in a solar plane, hailed the new record. “This project illustrates the new cycle that now characterizes aviation, which must imperatively adapt to renewable energies,” he said.