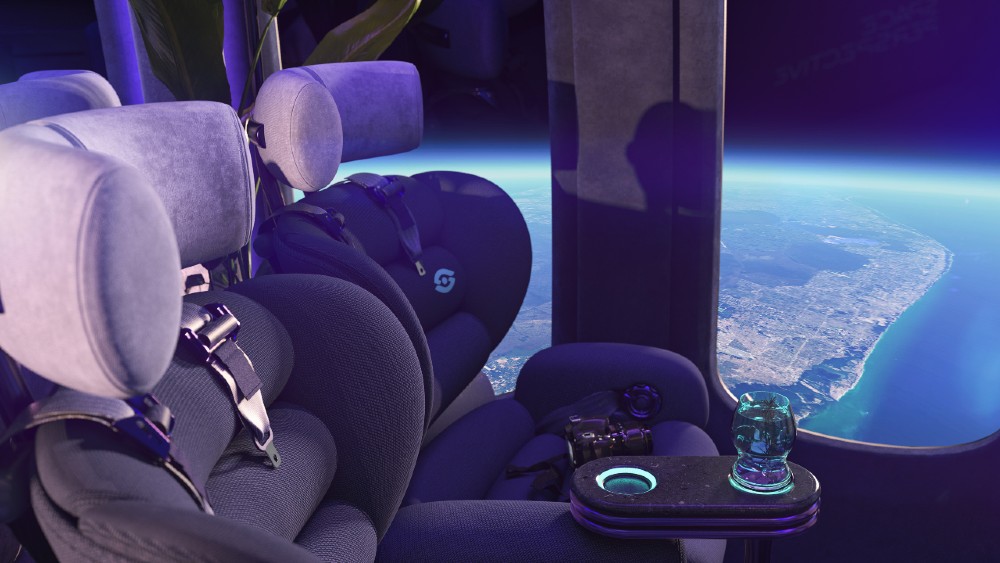 Imagine the ultimate VR experience: Sitting back in a cushy recliner in your space capsule and watching 360-degrees of flat screens showing the Earth slowly shrinking as the space balloon above pulls you towards the sky. Later, sipping champagne and chatting with loved ones in this luxurious environment, the curvature of the blue planet reveals the edge of space. There’s a ring around the Earth where the sun is starting to peak over the horizon, and above, the inky blackness of space. Then slowly, gradually, the space balloon starts to descend, bringing you back to Earth for an astronaut-style splashdown.

Except it’s not a VR game. It’s the experience Space Perspective promises in late 2025, when the Cape Kennedy-based company is scheduled to launch its Spaceship Neptune space balloon for a series of six-hour trips to 100,000 feet above the planet. The  balloon is connected to a capsule that’s designed more like a private bar at a five-star hotel or the ultimate game room.

The company today revealed its “Space Lounge” interior, which it says is customizable. The capsule is obviously pressurized and climate controlled, but also has features like 1.8′ x 5.1′ windows (which it says will be the largest ever flown to space) and a restroom, also with its own great view of the Earth.

The reclining seats can be reconfigured if guests want, say, a smaller dining experience. The design team chose dark surfaces throughout the cabin to minimize glare and mood lighting to enhance different stages of the journey. The bar, in a nod to sustainability, is using repurposed materials from previous space balloons. The capsule will even have plants and herbs, used for food and drink preparation.

“The Space Lounge is a world away from the white, utilitarian environments you find in other spacecraft,” said Jane Poynter, founder, CEO and Chief Experience Officer of Space Perspective in a statement.

The experience of gliding upwards at 12 mph for hours will also be much different than the rocket-flight launches by other space-tourism firms like Virgin Galactic and Blue Origin, which last about 10 minutes.

Ambiance was a big factor in the design, including the mood lighting, fresh plants, herbs and, of course, the biggest-ever windows in space.  Courtesy Space Perspective

Co-Founder and CEO Taber MacCallum said that hundreds of layouts went through vetting before finally settling on this one. The company has secured a patent on the capsule’s structural engineering and two are pending for the design.

MacCallum said the design recognizes the space-balloon flight as a “shared human experience,” which translates into the reconfigurable seating, a walk-around capsule and an open center space for group photos.

The seating can be reconfigured into a group setting that looks more like a family den.  Courtesy Space Perspective

Despite all the trimmings, the flight comes back to the huge banks of windows, which not only allow for selfies and lectures from the pilot, also an expert on space, but offer what seems like a seamless connection between the planet and black beyond—the ultimate way of staring into space.