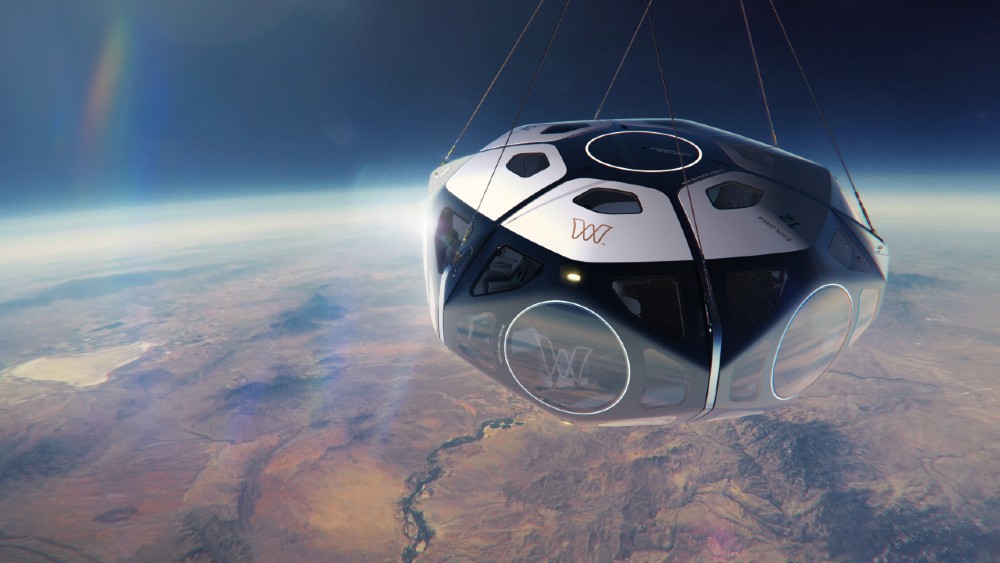 If you want to go to space but don’t feel like strapping yourself to a rocket—or can’t afford the airfare—consider a balloon to what World View CEO Ryan Hartman calls, “the edge of space.”

Of course, that “edge” is somewhat fuzzy. There’s no universally agreed upon point at which space begins, but the boundary is generally considered to lie somewhere between 50 and 62 miles above Earth’s surface. In space tourism terms, Virgin Galactic breaks the 50-mile threshold while Blue Origin punctures 62.

World View’s 14-million-cubic-foot, helium-filled balloon rises to an altitude of roughly 20 miles. “You can see everything the others see that go slightly higher,” Hartman told Robb Report.  That includes the darkness of space, the stars and the curvature of the Earth. “You’re truly seeing the planet from a vantage point that almost no one has,” he says.

The capsule being lifted into the stratosphere by the space balloon.  Courtesy World View

World View is not the only space balloon firm offering leisurely trips to the edge of space. Space Perspective is selling a similar experience for launch in 2024.

Balloon travel certainly offers some benefits over the 10-minute space shots of Virgin Galactic and Blue Origin. The ride, in a climate-controlled and pressurized capsule with “first class” level seats, includes a meal and cocktails. It also has wide viewing ports above, below and directly in front of each chair, and it spends six hours at altitude instead of a few minutes. “You have time to take in all that you’re seeing,” says Harman. “You’ll see day turn into night; you’ll see weather forming.”

The balloon has registered previous commercial flight. Each polyethylene balloon can only be used once, but the company has several recycling options for the material and a 100-year plan for minimizing the impact of its operations.

The pressurized capsule offers views of changing weather patterns, the edge of the Earth and blackness of space.  Courtesy World View

The capsule is undergoing a redesign to add amenities, so testing will take place in 2023 with tourism duty starting in 2024, according to the company. World View is taking $500 deposits now to hold spots. The final price is $50,000 a seat.

To add value, a World View flight will be one day of a five-day excursion to seven “world wonder” sites that will serve as points of departure, including the Amazon rainforest, the pyramids at Giza, the Grand Canyon, the Great Barrier Reef and the Great Wall of China. “The contrast of seeing these places up close and then from space creates a whole picture,” says Hartman.