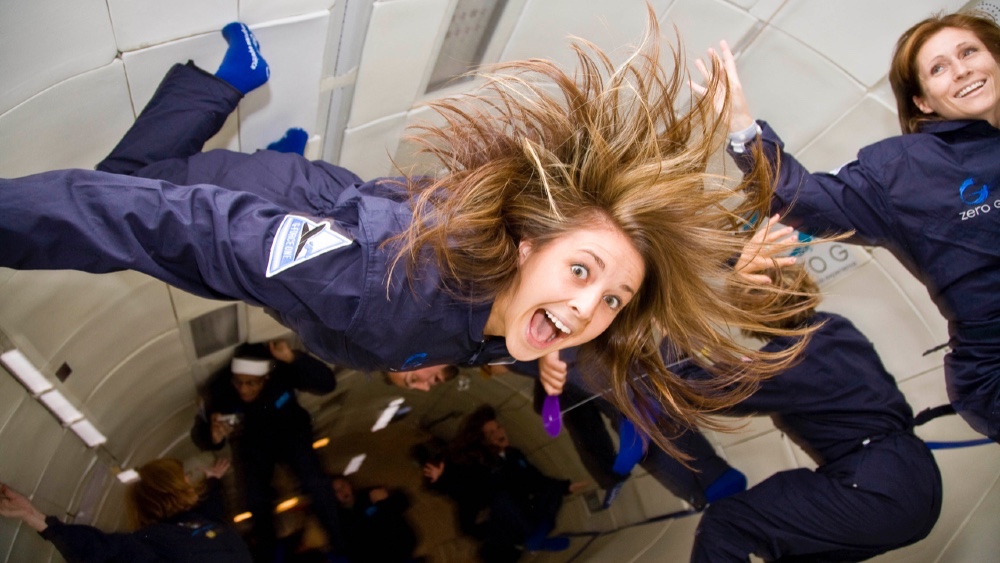 The company that lets you do the Moonwalk, while floating five feet in the air at 32,000 feet, is back.

After being sidelined since mid-March due to the Covid-19 pandemic, Zero-G, the only FAA-approved provider of weightless flight in the US is taking off again with an eight-city tour starting in Long Beach, Calif., on August 16. For $6,700, Zero-G gives thrill-seekers the chance to experience true International Space Station-like weightlessness inside its specially modified Boeing 727.

During a series of gut-wrenching parabolic turns, the jet creates zero gravity, allowing flyers to float around, perform flips and rolls, and watch water droplets and M&Ms hover in front of their eyes.

Martha Stewart floats around the specially modified and now heavily sanitized cabin of a Boeing 727.  Zero-G

During its time grounded, Virginia-based Zero-G says it put in place a host of health and safety measures, starting with a 30 per cent reduction in the number of passengers, from 34 to 24. On the plus side, this not only allows better social distancing, but provides more space for flyers to bounce around.

Also, before each take-off, the plane gets professionally sanitized, flyers get their pulse and temperature checked, and personal protective equipment like a custom face mask and sterilized flight suit are handed out. The company also says that during the flight, cabin air is changed every three minutes.

The Boeing 727 has a special stretch of FAA-sanctioned air space where it can make sharp turns to create the sense of weightlessness in the cabin.  Zero-G

The Boeing 727-200, which first flew in 1976 wearing Braniff International livery, has been upgraded with beefed-up hydraulics.

For the flights, G-Force One, as the plane is affectionately known, flies in FAA-designated airspace that is roughly 100 miles long and 10 miles wide. For take-offs and landings, fliers are buckled in, but as the plane levels out at 24,000 feet, they get to move into the heavily-padded main cabin and lie flat on the floor.

The pilots then climb steeply to around 32,000 feet and go over the top of the parabolic arc, creating 20 to 30 seconds of weightlessness. That provides for up to half a minute of goofing around, doing personal barrel rolls, zero-gravity handstands and push-ups, or chasing floating water droplets.

During the course of each flight, which typically lasts an hour and a half, the “over the top” zero-gravity maneuver is carried out 15 times. Other stops beyond Long Beach include San Jose, Calif; Seattle, Wash.; Las Vegas, NV; Newark, NJ; Washington DC, Houston, Texas, and the tour wrap-up in Fort Lauderdale, Fla., on November 7.