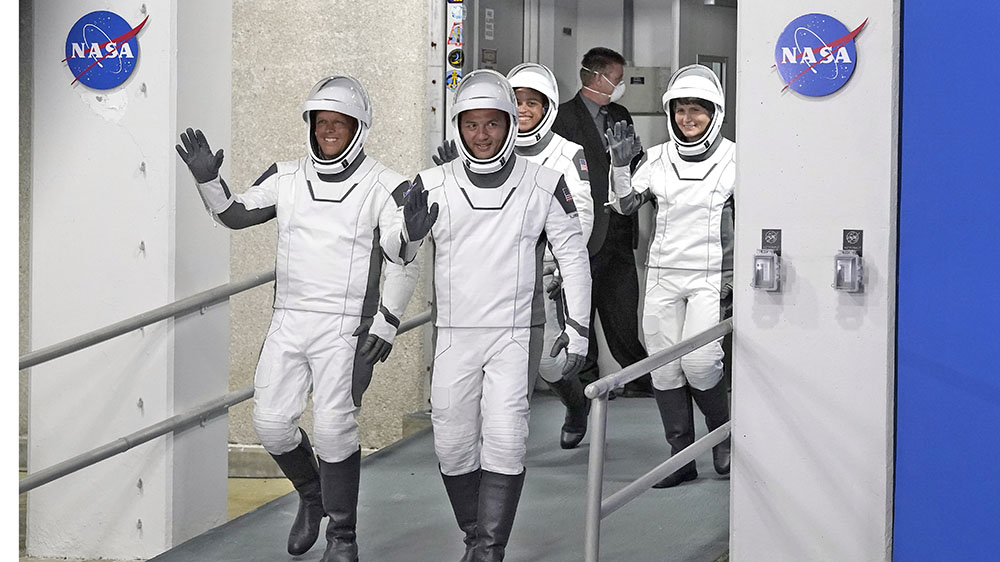 Another day, another space mission.

Early Wednesday morning, SpaceX successfully launched four astronauts toward the International Space Station, starting a mission with one of the most diverse crews in history.

Elon Musk’s space tourism company sent the Crew-4 astronauts into the firmament on a SpaceX Dragon capsule named Freedom, which is scheduled to dock on the ISS around 8:15 pm ET tonight. The astronauts on board include NASA’s Kjell Lindgren, Robert Hines, and Jessica Watkins, along with the European Space Agency’s Samantha Cristoforetti. The group took off from Launch Complex 39A at the Kennedy Space Center in Cape Canaveral, Florida, atop a Falcon 9 rocket.

“Our heartfelt thank you to every one of you that made this possible,” Lindgren, the commander of the mission, said before the launch. “Now let Falcon roar and Freedom ring.”

The Crew-4 mission takes off from the Kennedy Space Center.  Associated Press

The Crew-4 astronauts will spend the next six months on the ISS, carrying out more than 200 science experiments and at least two spacewalks. Their research will focus on areas including materials science, health technologies and plant science to prepare for human exploration beyond low-Earth orbit and to benefit life on the planet, according to NASA.

With the successful launch, Watkins has become the first Black woman to participate in a long-term space mission. She is also on NASA’s shortlist for a future moon-landing mission.

“This is certainly an important milestone I think, both for our [space] agency and for the country,” Watkins said at a press conference last month. “It really is just a tribute to the legacy of the Black women astronauts that have come before me as well as to the exciting future ahead.”

The Crew-4 launch follows SpaceX’s Ax-1 flight, the first all-private space mission to the ISS, which returned to Earth earlier this week. The Ax-1 crew conducted work for more than 25 research projects, helping partners such as the Mayo Clinic and the Cleveland Clinic.

“The past few days at Kennedy Space Center have been inspiring and busy with the return of the Axiom crew and now the successful launch of Crew-4 astronauts to the International Space Station,” NASA administrator Bill Nelson said on Wednesday. “These missions wouldn’t be possible without the dedicated NASA and SpaceX teams here on Earth. Godspeed, Crew-4!”

Crew-4 will splash back down to Earth sometime in September.