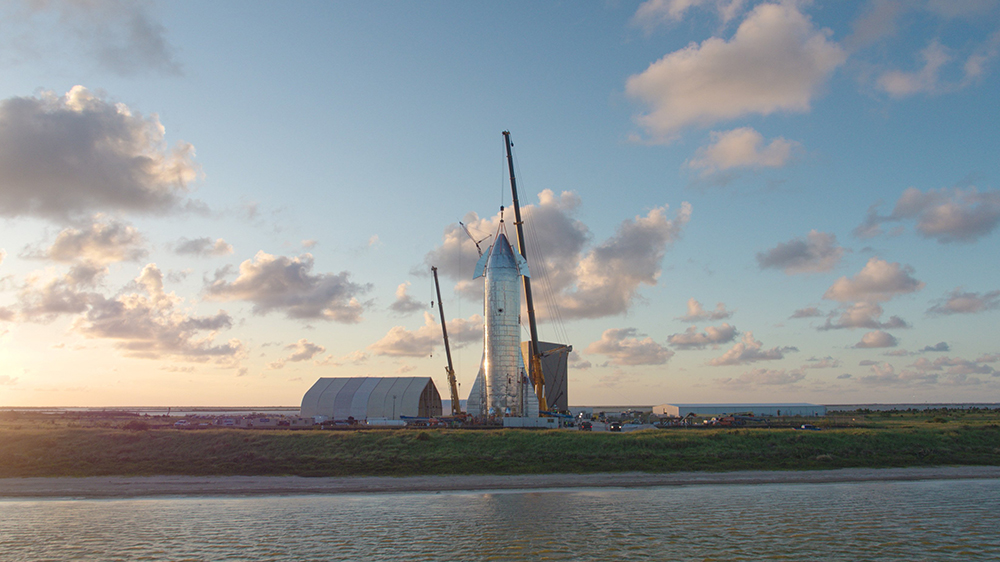 Elon Musk isn’t giving up his dream of reaching Mars. And over the weekend, he unveiled the spaceship prototype that he hopes will help get us there.

On Saturday, the tech titan showed off the towering, grain silo-like Starship for the first time in front of a group of space enthusiasts and reporters at the Space X build and launch facility Boca Chica Village, Texas. He also announced that within the next month or two the shiny steel rocket will be launched to an altitude of 12 miles before returning to earth on one piece, according to The New York Times.

“It’s going to be pretty epic to see that thing take off and come back,” Musk said while animations of Starship landing on the moon and Mars showed at the event. He also said that he hoped the rockets first orbital flight would take place in the next six months.

Unlike its predecessor, the 68-foot Falcon 1, the Starship prototype measures 164-feet-tall and 30-feet in diameter. When combined with the Super Heavy, its booster stage, the full rocket will reach a height of 387 feet and will be able to carry 220,000 lbs. of cargo into orbit. According to the Times, that’s as powerful as the Saturn 5 rocket that took astronauts to the moon in 1969.

Starship is just the latest addition to SpaceX’s growing lineup of reusable launch vehicles. Musk has said he feels that it is a key step in making space travel like air travel for people. According to Reuters, he also said he hopes that the rocket will take humans to space sometime in the next year. Last year, it was announced that Japanese billionaire Yusaku Maezawa had purchased an around-the-moon trip that’s scheduled to take off in 2023.

If that sounds aggressive, it’s worth noting that Musk is prone to setting over-ambitious timelines for his many projects. NASA, in particular, is annoyed at the company for being a “year behind schedule” in delivering on its promise to transport astronauts to the space station via its Crew Dragon capsules. Here on Planet Earth, the Tesla pick-up truck Musk has been teasing for two years failed to come out this summer and won’t be here until November, at the earliest.

As excited as Musk is about SpaceX’s progress, the people of Boca Chica Village, many of whom can see the rocket ship from their yards, seem decidedly less enthusiastic about the whole situation, according to the Times. As you might expect, Musk has a plan for that. To offset community ire and any potential danger from testing the rockets, SpaceX has sent letters to 26 residents offering to buy their homes for three times their value. The company has said it wants an answer within two weeks and was not willing to negotiate.