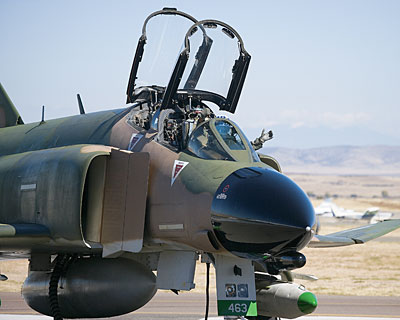 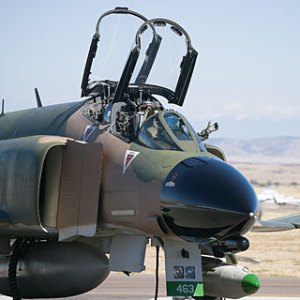 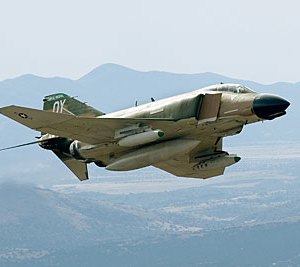 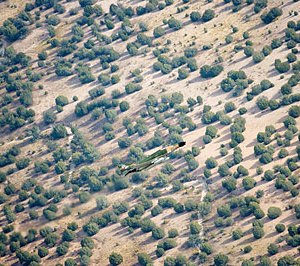 “Out of control at or below 10,000 feet: Eject.” Of all the warnings and cautions contained in the fighter jet training packet, this was the one that alarmed me most; my civilian pilot training did not include any such scenarios. Out of control? What exactly was I in for during my 30 minutes in the rear cockpit of a restored McDonnell Douglas F-4 Phantom?

The plane is owned and operated by the Collings Foundation, a curator of historic military aircraft. Although the foundation is headquartered in Stow, Mass., it bases the Phantom at its Collings West facility at Ellington Field, an airport near Houston. In March, Collings began training civilians to fly its supersonic jet, which might be the only privately owned, airworthy F-4 in the world. Participants must possess a valid FAA pilot’s license and a medical certificate to gain admittance to the $9,800, two-day course, which culminates in a half-hour sortie.

As an aerophile and a pilot, I am fascinated by civil aviation, but I also have a soft spot for the Phantom, an aircraft that established 25 speed and altitude records. (In my teens, I had a model F-4—the Navy version, with its arrestor hook deployed—hanging from my bedroom ceiling.) McDonnell Aircraft developed the jet in the mid-’50s for the U.S. Navy and ultimately produced more than 5,000 of them from 1958 to 1979. The U.S. Air Force and the Marines adopted it as well, and all three branches deployed it in Vietnam against the Soviet-built MiG-21. Phantoms later served with the Blue Angels and Thunderbirds demonstration teams. The American military retired its last F-4 in 1996, but Germany, Japan, and a few other nations continue to fly upgraded variants. Despite its mass (more than 50,000 pounds fully loaded) and power (18,000 pounds of thrust per engine), the Phantom cuts a svelte profile. It is both beautiful and frightening, and only a brave or foolish few would come too close—which is precisely what I am about to do.

The experience begins, at 9 am on a Saturday in March, with a classroom briefing, followed by cockpit familiarization and ejection training. My instructor is Harry Daye, a 50-year-old Air Force veteran with 2,500 hours of F-4 experience. He lives in Arizona and flies 737s for Southwest Airlines when he is not volunteering at Collings. Projecting a calm and confident demeanor, Daye leaves no doubt that he knows exactly what he is doing, and I like that, because, secretly, I am scared witless. Daye presents a primer of the plane’s onboard systems and inherent quirks. “Fighters are naturally unstable. That allows them to be so maneuverable,” he says. “The ideal fighter should be as unstable as possible, while still controllable.”

Also enrolled in the program is Bill Disser, a 78-year-old retired aerospace engineer from California. When I ask Disser why he is here, he spouts an adrenaline junkie’s mantra: “Faster planes, younger women, and colder beer. I’m into speed, that’s my thing.”

Unlike Disser, I am not into speed. Possibly I am missing that gene, so common to other pilots, that allows them to savor the sensation of thundering through the air upside down at 500 knots. The F-4’s remarkable capabilities notwithstanding, I would rather be cruising in a 747. Strapping into this jet, then, is payback for my treasonous affections for the softer side of flying. Harry Daye is going to kick my romantic ass from cloud to cloud, and I had better like it.

Disser is the first to fly, however. Bill Bowers, a former Marine F-4 pilot and one of Collings’ senior aircrew staff, secures him in the rear cockpit while the volunteer ground crew swarms beneath the plane’s belly, checking hatches, attaching external power supplies, and watching keenly for anything damaged, leaking, or otherwise out of place. Daye, in the forward seat, awakens the engines, two General Electric noisemakers built before the advent of modern turbofans. The racket they produce—a cacophony of roars, rumbles, and hisses—seems strong enough to shatter a bystander’s thigh bones.

While awaiting Disser’s takeoff, I talk to Tommy Garcia, director of Collings West. He is as twitchy and distracted as an expectant father, more nervous than excited. “It’s been good to us, knock on wood,” he says of the Phantom, with a cross between a laugh and a sigh. “Certain systems are maintenance-intensive.” I would learn later that during one early flight, a near-total hydraulic failure almost forced both occupants to eject. The problem was traced to a faulty repair, and the staff convened a postmortem meeting to ensure such mistakes would not recur. “It’s been a steep learning curve,” says Garcia, “but at this point we’re confident.”

At last Daye and Disser rocket down the runway and lift off. The plane rides level for a moment, then noses into what seems to be a 90-degree ascent. “Right there,” says Garcia, shaking his head. “That’s the point where your kidneys are going through the back of your seat.” Within seconds, the Phantom shrinks to a speck in the azure Texas sky, and I hear a faint popping noise, which is either the sound of Daye cutting out the afterburners, or something gone plunk in the depths of my stomach.

Daye and Disser return 20 minutes later. Garcia and the ground crew hear them first, lifting their heads en masse like dogs sensing the footfalls of distant prey. “Here she comes,” announces one of the spectators. “Just listen to her.” As the jet glides toward Ellington, it emits an apocalyptic whine before landing and coming to a stop on the runway. Disser drips with sweat as he steps down from the cockpit. His face is the color of a rotten cantaloupe, but he is smiling. Now it is my turn.

The seating process is complicated: harness to latch, straps to tighten, oxygen mask to attach, and a spider’s web of lanyards, hoses, and clips to adjust, fasten, and affix. As Bowers belts me in, I think of Robert Duvall’s F-4 plummeting from the sky in flames at the end of The Great Santini, a favorite movie from my childhood. Once secured in place, I feel at one with this monster. No less integral than a wing spar or an aileron, I am a willing and capable absorber of whatever insanity Daye is capable of dishing out, or so I hope. But I am also instantly expellable, because I am atop a rocket-propelled ejection seat.

As we taxi out while reviewing a series of checklists, I feel as though I have been sewn into a giant coiled spring; the plane seems to want to bolt from beneath me, like a bulldog straining against its leash. Then the afterburners flare and the F-4 streaks down the runway, reaching a speed of 172 mph before Daye yanks us into the air. The ground rushes by as we accelerate over the airport perimeter at 300 knots. It strikes me that I never have flown this low and this fast at the same time, and then Daye pulls the stick back toward his crotch and we hurtle up into that kidney-crushing ascent Garcia mentioned. The zoom-climb to 15,000 feet takes about nine seconds. At its peak, Daye rolls the plane upside down, rights it, and quiets the afterburners.

“How many g’s was that?” I ask Daye through the intercom. “About four,” he says.

That figure describes the normal force of gravity quadrupled. It felt as if an enormous sack of potatoes had been hurled onto my lap and each of my limbs had been chained to an anvil. If I had had my head down or my shoulders turned when the climb commenced, I would have been frozen in that position for the entire ascent.

After Daye guides the F-4 through a series of aerobatic turns, climbs, and descents, he asks if I “wanna take it,” and I accept. I have not touched the controls of an airplane since I was laid off from an airline four years ago, and I have never performed aerobatics. I give it a whirl, and the results are not pretty. In fairness to myself, the aft cockpit is the weapons officer’s station; the plane can be flown from here, but it is engineered and instrumented for the forward pilot. Daye suggests that I try a couple of aileron rolls, and I send the Phantom into a 360-degree twirl—at least, that is my intention, but because the rotation is so damn fast, I overshoot the horizon and complete the maneuver in a 60-degree bank. After three or four more attempts in which I spin the plane around like a sideways tornado, I give up. “I’ve got it,” says Daye, unscrewing me from the sky. I am embarrassed and dizzy, but at least I have not vomited. Pilot colleagues who have flown fighters had placed my odds of regurgitation at anywhere from 50 percent to 99 percent, depending on Daye’s mood and what I had for breakfast (water). I do not feel ill, but what do I feel?

Considering that I trained as a civilian pilot exclusively, flying light four-seaters before captaining turboprops that rarely exceeded 250 knots, and later flying cargo planes and 737s, suffice to say this is nothing like any experience I have had. The cockpits share vestigial similarities, but the sensation—intense centrifugal pressures interspersed with moments of weightlessness—is unique; I endured repeating waves of exhilaration, physical pain, and mortal fear, but I suppose that is the idea.

“Are fighter pilots put through vomit training?” I ask.

“What?” Daye answers through the crackling intercom.

“Nothing,” I reply as he digs into a 90-degree snap roll that he follows with a multi-g, 180-degree turn. I hear a groaning noise and realize that it is coming from me.

Near the end of the sortie, Daye and I feel the plane shake and hear staccato booming noises issuing from the right-side engine. It sounds like a series of engine compressor stalls; the booms stop when Daye reduces power, but they reappear when he restores it. Usually, compressor stalls are not hazardous, but Daye decides to return early to the airport, just in case. (Later I learned that the engine had ingested some debris before takeoff and sustained damage to several intake blades. Subsequent classes were postponed while a replacement engine was sought, but foundation officials anticipated returning the F-4 to the skies as early as June.) I fly the initial approach to the airport, finessing a few gentle descents and turns that appear to annoy the daredevil in Daye, or at least perplex him, because a Phantom is not meant to be flown in this mundane fashion. He takes over for the landing, and the drag chute pops from the tail cone while we roll along Ellington’s runway 17R.

As I climb from the cockpit, Garcia asks, “How was it?” with an I-told-you-so grin on his face.

It was awful. It was wrenching, frightening, and dangerous, but it was thrilling and unforgettable, too. Such a weird, emotionally combustible dichotomy will not make sense to many people, but it is familiar to many pilots, and I am beginning to understand it a bit more clearly.