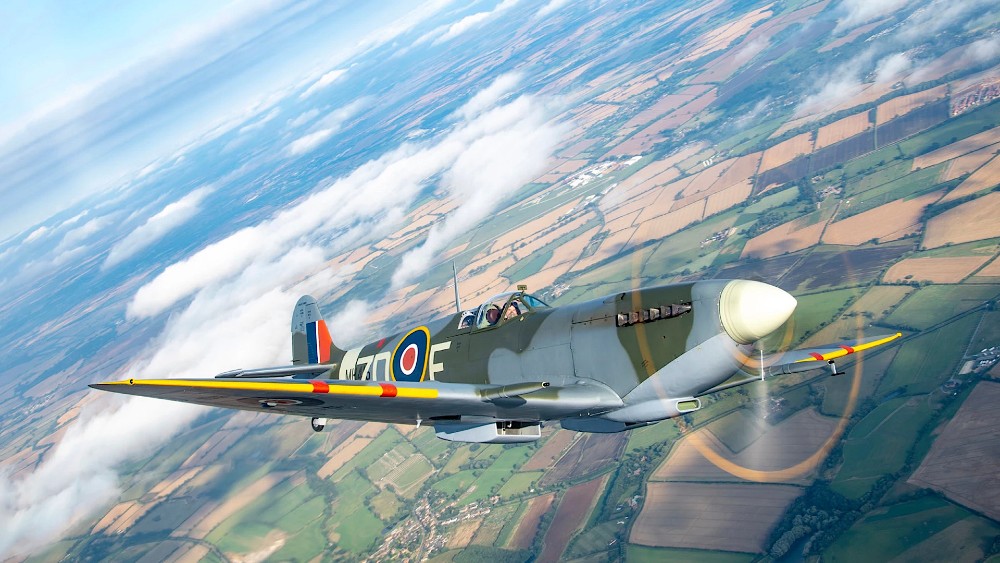 It flew sorties all through World War II, shot down a German fighter in a kill-or-be-killed dog-fight, and starred in the 1969 blockbuster movie The Battle Of Britain before being mothballed for 41 years in a Texas barn.

Now, fresh out of a five-year nut, bolt and last rivet restoration in Australia, this legendary 79-year-old Supermarine Spitfire Mark IX, is being offered for sale with a £4.5 million, or roughly $6.1 million, price tag.

“It is simply one of the most original Spitfires in existence,” Richard Grace, Spitfire specialist, and co-director of The Aircraft Sales Company in the UK, tells Robb Report. “That, together with the plane’s significant combat history, plus its cinematic appearances, makes it hugely collectible.”

This 1943 Spitfire, which won a dogfight against a German Focke-Wulf during World War II, is up for sale.  The Aircraft Sales Company

What sets this Spitfire—known by its tail number MH415—apart is its unparalleled originality. “It was essentially untouched from the day it left the assembly factory in 1943, to when it was disassembled for shipping to Australia in 2014. It’s a true time capsule.”

What’s also remarkable is the plane’s complete documented history; from it joining Britain’s Royal Air Force Squadron 129 in August 1943, to its stints with the Dutch and Belgian Air Forces. An extensive document file also shows its confirmed “kill” in a clash with a German Focke-Wulf 190 fighter above northern France in September 1943.

After being retired from air force duties, Hollywood came calling, first for the 1962 wartime drama The Longest Day, starring John Wayne and Richard Burton, then in the action-packed The Battle of Britain in 1969 starring Michael Caine.

The Spitfire sat in a Texas barn for over 40 years, but was eventually purchased by the Warbirds Flight Club in Australia. They put 55,000 man-hours into its restoration.  Courtesy The Aircraft Sales Company

One of the stunt pilots in The Battle of Britain was Texan warbird collector, Wilson ‘Connie’ Edwards. In lieu of payment for his flying services, Edwards took the Spitfire and shipped it back to his Big Spring, West Texas ranch. In 1973, after a few air show appearances, the Spitfire was tucked away in one of his many barns. Forty-one years later, the plane was offered for sale and quickly snapped-up by a group of Australian investors known as the Warbirds Flight Club.

It was then, for the first time in its life, disassembled and shipped to Vintage Fighter Restoration in Scone, New South Wales, for a complete, bare-bones restoration. This took almost five years and involved over 55,000 man-hours.

“What was remarkable about the restoration, is that apart from four wing spars being replaced, everything was kept original. Over 95 per cent of this plane is just as it was when it emerged from the factory in 1943,” explains Grace.

The Spitfire had supporting roles in Hollywood movies like “Battle of Britain” and “The Longest Day.”  Courtesy The Aircraft Sales Company

Now back in the UK awaiting a new owner, MH415 is said to be in perfect flying condition, having flown for only six hours since the restoration. Richard Grace should know about the plane’s flying credentials, having taken it for demo flights over Britain’s Northamptonshire countryside. The restorer flew his first Spitfire—his father’s—at age 23 and now, as part of his Ultimate Warbird Flights company, takes paying customers for rides in the family plane.

What’s MH415 like to fly? “One word: amazing,” says Grace. “Spitfires are all about precision and maneuverability; it’s a finger-and-thumb airplane. Not only does it go very fast, but it goes slow equally well, making it easy to take-off and land.” How fast? Powering the Spitfire is a 27-liter Rolls-Royce Merlin water-cooled V12. Packing over 1,000-horsepower, it can push the elliptical-winged single-seater to a top speed of over 350 mph.  According to Grace, the most interest in MH415 so far has come from wealthy global investors looking to take advantage of the current buying frenzy in single-engine vintage warbirds.

“Like rare classic sportscars, the market for Spitfires and P-51 Mustangs is on fire,” says Grace. “Especially for ones that are flight-ready, and have real history and provenance. That £4.5 million asking price is totally realistic, and its value will only go up.”