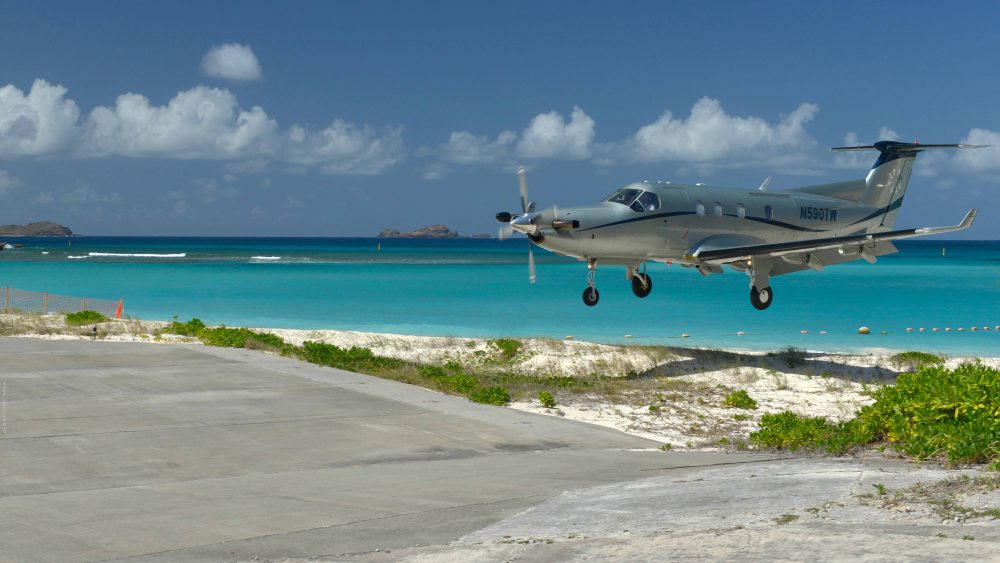 By the time hurricanes Irma and Maria reached New England this fall, they had become just rain storms with a little bit of wind. Nevertheless, they did have a huge impact on at least one Connecticut company, Tradewind Aviation, a business headquartered in the town of Oxford that provides on-demand charter flights and operates year-round and seasonal shuttle services in the Northeast and the Caribbean.

Tradewind’s base of operations in the Northeast is at Westchester County Airport, near White Plains, New York, where it recently resumed its winter service to Stowe, Vermont, offering weekend flights (two up on Fridays and two down on Sundays) aboard Pilatus PC-12 turboprops. The company also flies a PC-12 shuttle between Westchester and Boston and offers seasonal service to Nantucket and Martha’s Vineyard.

In the Caribbean, it operates out of Luis Muñoz Marín International Airport in San Juan, Puerto Rico, which is still recovering from Maria. And Tradewind’s regular service out of San Juan includes PC-12 flights to St. Barts and other islands that were in the direct path of Irma.

The day after Irma struck St. Barts, David Zipkin, who cofounded Tradewind with his brother, Eric, in 2001, was in the Caribbean with Eric, coordinating relief flights to the island. “We had a 30-person team down there,” says Zipkin. “They were all at Costco and Home Depot, everywhere, buying everything we could find—pallets of water, generators, chainsaws—to fly to St. Barts.

Zipkin says the company flew about 60 flights, on its own dime, to St. Barts, bringing in supplies and evacuating people who needed to get off the island. Then a week later, Maria struck Puerto Rico. “Almost the reverse happened at that point,” he says. “The people on St. Barts were starting to dust off and clean up and recover. The folks who didn’t need our generators and chainsaws anymore brought them to the airport, so we could bring them back to San Juan to help out there. It was a very interesting few days.”

Zipkin says that though parts of Puerto Rico were devastated and have yet to recover, the airport was open within a week, enabling his company and the major airlines to resume service to San Juan. He says most of the hotels, restaurants, and other businesses in the metropolitan area also reopened shortly after the storm.

He says St. Barts has made a similarly and surprisingly quick recovery. “I was down there the day after, and the sight was just horrifying,” he says. “It looked like a bomb went off. There were no leaves on the trees, no leaves on the bushes. Some buildings had lost their roofs. But what was amazing is how quickly they got it together. They started rebuilding right away.”

Zipkin, who returned to St. Barts with his family for Thanksgiving, says that most of the vegetation had already regrown by then, and that while some of the hotels suffered too much damage to reopen this winter, plenty of villas are available for rent. “The last estimates we heard were that about 60 percent of the villa-rental market is available for Christmas, and that number will rise to 80 percent by February and March,” he says.

Zipkin says that many people cancelled their plans to vacation in St. Barts after Irma struck, especially those who were going to be visiting for the first time. But for most part, he says, the regulars are returning. “The net effect, unfortunately, is it will be a softer season than normal,” he says, “but not nearly as bad as it could have been.”

Shortly after the hurricanes hit the Caribbean, Tradewind went ahead with its planned launch of an interline agreement with United Airlines. The deal enables clients to book a single reservation through United for their United flights to and from San Juan and their Tradewind flights to and from St. Barts, Nevis, or Antigua. “It went live in mid-September, right around the time of the hurricanes,” says Zipkin, “but we didn’t announce it until late October, for obvious reasons.”

The interline agreement also enables you to make a single reservation for travel involving Tradewind and the regional airlines that United partners with. “The example that United gives is that you could be coming from Duluth, transfer through Chicago, through San Juan, and then fly to St. Barts,” says Zipkin, “and your bag is tagged all the way through and transferred.”

For clients who don’t fly United and don’t want to wait at the baggage pickup and then check their bags on a Tradewind flight, the company offers a VIP service. A Tradewind rep meets you at your airline’s jetway when you get off the plane, gets your bag tags from you, picks up your baggage, and checks it onto your Tradewind flight. “It’s a little extra money,” says Zipkin, “but we provide that service as an extra layer on top for people who don’t want to deal with it on their own.”