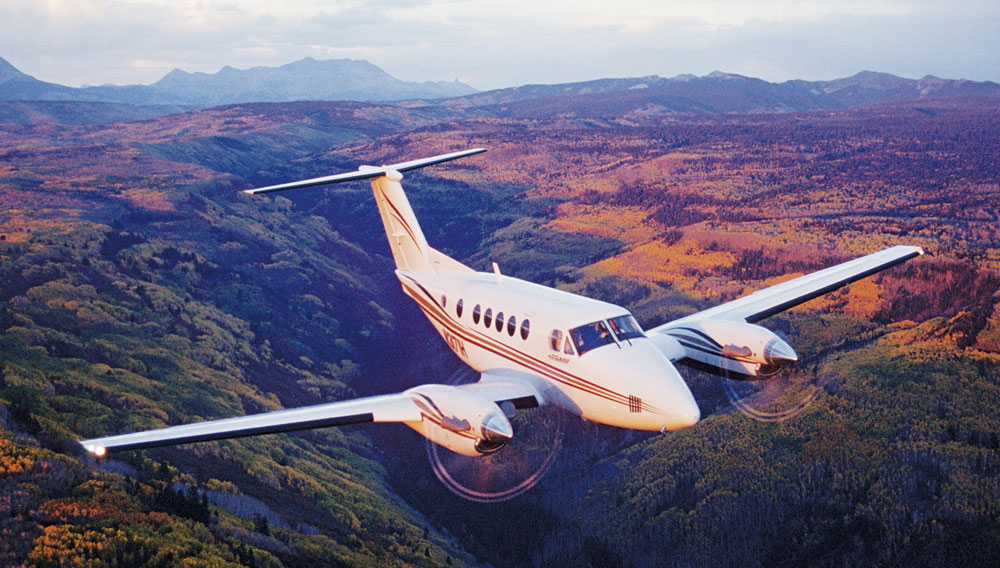 Members of the Robb Report Private Aviation Advisory Board chose the aircraft recognized in this section based largely on each of the models’ performance, availability, average price on the secondary market (according to AMSTAT, JETNET, and other business-aircraft market-research firms) compared to the cost of a new aircraft, and ability to retain resale value. However, the condition of any specific aircraft will vary, so buyers of secondary aircraft should consider the following criteria—and consult an aviation advisor with extensive knowledge of the secondary aircraft market—before making a purchase: where the aircraft and engines are in their maintenance cycle; engine modification status; total flight time and landing cycles; avionics configuration; condition of paint and interior; overall pedigree; condition of the aircraft records; and any damage sustained.

More than 7,000 King Air twin-engine turboprops have rolled out of the Beechcraft assembly plant since the line’s launch in the 1960s, and since the model’s launch in 1974, more than 2,000 units of the Hawker Beechcraft King Air 200 (316.676.5034, www.hawkerbeechcraft.com) and its variants have taken to the skies. The 200 has been popular in part because of its roomy, well-lit cabin, which seats as many as 11 passengers and has 10 large windows. Rugged, dependable, and versatile, the King Air 200 can land on and take off from short and rough backcountry runways, yet it also displays an attractive and businesslike ramp presence. With new models (now called the King Air 250) priced at about $6 million, the secondary market for the King Air 200 offers “a tremendous buying advantage,” according to Robb Report Private Aviation Advisory Board member Bill Quinn, managing director of Charleston Aviation Partners. Prices for preowned examples of the King Air 200 and its variants range from about $800,000 to $3.6 million, and presently buyers will find a surplus of recently built examples that are in good condition. —Mary Grady

Proving the reliability of the single turboprop engine in the Pilatus PC-12 (800.745.2887, www.pilatus-aircraft.com) seemed as though it might be an insurmountable marketing challenge for the Swiss manufacturer when it introduced the aircraft in the mid-1990s. But the PT6A-67P engine, built by Pratt & Whitney Canada, has demonstrated dependability: Thousands of examples from the line are in operation in a variety of aircraft. Pilatus has produced more than 1,100 PC-12s, which are especially popular with owner-pilots, who appreciate its economical operation and robust performance. The cabin, which at more than 16 feet long seats six to nine passengers, is larger than those of many entry-level jets. New PC-12s sell for about $4.6 million with an executive-configured interior, while preowned examples are priced from $1.4 million to $3.9 million. —Mary Grady

Designed to be economical and easy to operate for owner-pilots, the Cessna CitationJet and Citation CJ1 (316.517.6056, www.cessna.com) have retained their appeal, though both are out of production. (Among other upgrades, the CJ1 offers avionics that are superior to the CitationJet’s.) Cessna built nearly 600 total examples of these two models, and they are plentiful on the secondary market. The jets can seat five to eight passengers in their 11-foot-long cabins, where a full-length dropped aisle makes the interiors seem even more spacious. The CitationJet and CJ1 are fuel efficient and easy to fly, and offer plenty of range and speed for local and regional trips. Prices on the secondary market average about $1.5 million for the CitationJet and $2.3 million for the CJ1. By comparison, a new Citation Mustang, which now fills Cessna’s entry-level slot, seats five passengers and sells for about $3 million. —M.G.

Derived from the Citation V, the Cessna Citation Ultra (316.517.6056, www.cessna.com) had a production run that lasted from 1994 to 1999 before it evolved into the Encore and then the Encore+. Preowned examples of the Ultra remain “versatile and dependable,” says Robb Report Private Aviation Advisory Board member Walter Kraujalis, president of AeronomX. “It’s just right for flying six or seven people on trips of around 1,200 miles,” he says. Kraujalis notes that one of the Ultra’s strongest selling points is its short-field capability: Carrying its maximum payload, the jet can take off from runways as short as 3,200 feet. Examples of the Ultra, which originally sold for $6 million or more, can be found on the secondary market for an average price of about $2.6 million. —M.G.

The latest evolution of the Cessna Citation Excel (316.517.6056, www.cessna.com), the XLS+, features a roomy and quiet 12-passenger cabin, superior runway performance, and excellent range. But the original Excel model offers that same cabin and comparable performance: It can take off in 3,650 feet and climb to cruising altitude in 22 minutes, and it has a range of nearly 1,900 miles and a cruise speed of 471 mph. Excel models built in the late 1990s are priced from $3 million to $4 million, compared to roughly $12.7 million for a new XLS+. “That’s a lot of airplane for that kind of money,” says Robb Report Private Aviation Advisory Board member Kevin O’Leary, founder and president of Jet Advisors. —Michelle Seaton

When the Citation Excel received its first makeover, the result was the Cessna Citation XLS (316.517.6056, www.cessna.com), which featured a pilot-friendly glass cockpit and more powerful engines. Like the XLS+ that followed it, the XLS offers a range of about 1,960 miles and a maximum cruise speed of 495 mph. It has the same cabin as the $12.7 million XLS+, with 90 cubic feet of baggage space, and it starts at about $6 million on the secondary market. —M.S.

Cabin comfort is a defining characteristic of the Hawker 800XP (316.676.0800, www.hawkerbeechcraft.com). The cabin is 21.4 feet long and has a height of 5.8 feet and a width of 6 feet at its widest point. It typically accommodates eight passengers in five seats and a three-place divan. While it does not have quite the range or performance of the roughly $16 million 900XP, it can travel nonstop from coast to coast, has a maximum cruise speed of 500 mph, and can climb to 37,000 feet in 20 minutes. The 800XP can take off at sea level in 5,000 feet of runway and land in 2,300 feet. Models manufactured as recently as 2000 can sell from $3 million to $5 million. —M.S.

Though it may have been considered the French manufacturer’s economy jet, the original iteration of the Dassault Falcon 2000 (201.440.6700, www.dassaultfalcon.com)—not to be confused with the newer 2000S and 2000LX variants—has a range of 3,400 miles, a maximum cruise speed of 550 mph, and a ceiling of 47,000 feet. The cabin is virtually indistinguishable from that of the $32.3 million Falcon 2000LX, with a length of 26.3 feet, a height of 6.2 feet, and a width of 7.7 feet. Most configurations seat eight passengers, and the jet offers 134 cubic feet of baggage space, so nobody has to travel light. Prices for classic 2000 models manufactured in the late 1990s or early 2000s range from about $8.5 million to $11 million. “Of course you won’t get the same range as the LX,” says Robb Report Private Aviation Advisory Board member Kevin O’Leary—4,600 miles. But, he notes, buyers can upgrade a classic 2000 with winglets that will add 230 miles to its range. —M.S.

Because of the high residual values and popularity of the Bombardier Challenger 300 (514.861.9481, www.bombardier.com), secondary-market bargains for this model are rare. Expect to pay from $13 million to $14 million for models built around the middle of the last decade. Still, that is only just over half the price of a new Challenger 300 ($24.3 million), and the two aircraft offer nearly identical performance capabilities. The Challenger 300 can fly nine or 10 passengers 3,500 miles nonstop and reach a cruise speed of 541 mph. It also can climb to a cruising altitude of 41,000 feet in less than 19 minutes. The cabin is more than 6 feet high and more than 7 feet wide. —M.S.

Members of the Robb Report Private Aviation Advisory Board cite the Gulfstream GIV and GIV-SP (912.965.3000, www.gulfstream.com) as two of the best buys on the secondary market. Gulfstream built the GIV from the mid-1980s through 1992, when it was replaced with the GIV-SP, which featured updated technology for the cabin and cockpit. The GIV-SP remained in production until 2003. Both airplanes have stand-up cabins longer than 40 feet, with room for as many as 19 passengers, continent-hopping ranges of 4,500 miles or more, and cruise speeds of about 530 mph. On the secondary market, GIVs are plentiful and have prices ranging from approximately $5.7 million to $8.7 million. The GIV-SP sells for an average of about $12 million. (A new G450, which replaced the GIV-SP, is priced at about $41.1 million.) Both the GIV and GIV-SP offer “a lot of bang for the buck,” says Robb Report Private Aviation Advisory Board member Bill Quinn. “Great range and plenty of cabin space really make these airplanes shine.” —M.G.

Deliveries of the Bombardier Global 5000 (514.861.9481, www.bombardier.com) began in 2005, and the jet remains in production, so examples on the secondary market are relatively new. The model is known for its huge stand-up cabin—45 feet long, 8 feet wide, and more than 6 feet tall—and its 5,900-mile range. The cabin is spacious and peaceful. Bombardier mounts the jet’s two Rolls-Royce engines aft of the passenger cabin to minimize noise and vibration, while the aircraft’s swept wing helps reduce turbulence. Fresh from the factory, a new Global 5000 sells for $49.1 million; the prices for secondary-market examples average roughly $38 million, but early models with high flight hours can be found for about $28 million. —M.G.

Offering plenty of range, speed, and cabin space, the Bombardier Global Express (514.861.9481, www.bombardier.com) is well suited to globe-trekking itineraries. The secondary market for this model, which was introduced in 1999, is “lively,” according to Robb Report Private Aviation Advisory Board member Walter Kraujalis. “You wouldn’t think we’re in the midst of an economic slowdown.” The cabin stretches 48 feet and seats eight to 19 passengers. The jet cruises at about 650 mph and can fly for 7,000 miles nonstop. In 2005 the Global Express was replaced by the upgraded XRS, which Bombardier recently rebranded as the Global 6000. On the secondary market, the Global Express sells for an average of about $27 million; a new Global 6000 is priced at $57.5 million. —M.G.