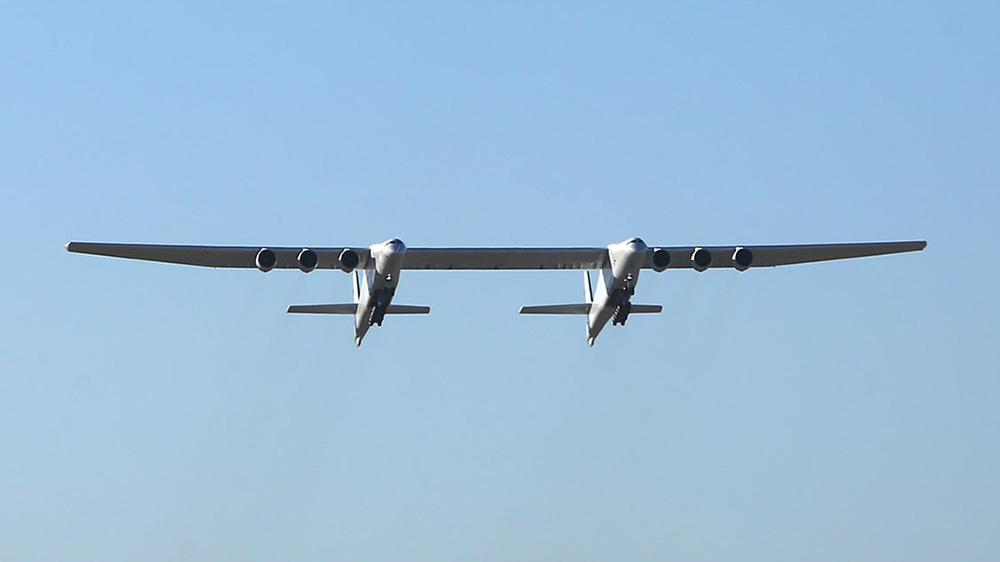 It took two years, and a change of ownership, but the world’s largest plane has taken flight for a second time.

The Stratoluanch Roc completed a successful test flight over the Southern California desert on Thursday morning, according to Space. The flight, which lasted over three hours, makes the company’s goal of using the giant plane to air launch hypersonic vehicles one step closer to reality.

The dual-fuselage Roc, which has a jaw-dropping wingspan of 385 feet, took off from Mojave Air and Space Port just before 7:30 am local time. Over the course of the next three hours and 14 minutes, the massive aircraft flew around the surrounding desert, reaching a peak altitude of 14,000 feet (about 2.6 miles) and a top speed of 199 mph, according to the company. The flight was longer than the plane’s first, though it traveled at lower altitudes than it did in April 2019.

The purpose of Thursday’s flight was to see how the Roc handles cabin pressurization, as well as to test safety features and hardware upgrades implemented since its last outing, according to The Verge. And according to Stratolaunch’s chief operating officer, Zachary Krevor, everything went according to plan. “Today’s flight, at first review, has appeared extremely successful,” he told reporters afterwards. “We accomplished all test points as desired, we have not seen anything anomalous, and we are very pleased with the condition of the aircraft upon landing.”

Touchdown!! Successful flight tests to round out the day. What a beautiful sight. pic.twitter.com/gdssjvoN8x

The Roc is the world’s largest aircraft by wingspan. It was dreamed up by late Microsoft founder Paul Allen early last decade, who imagined the flying behemoth traveling into the stratosphere before launching rockets and satellites into low orbit. Before he could see his plan come to fruition, though, Allen died in October 2018 following complications of non-Hodgkin’s lymphoma. The plane completed a first successful test flight six months later, after which it—and the rest of Stratolaunch operation—were put up for sale for $400 million.

The company was eventually bought by Cerebus Capital Management in October 2019. Almost immediately afterwards, the new owners announced that the plane would now be used as a mobile launch platform for hypersonic vehicles—aircraft that travel at Mach 5, or five times faster than the speed of sound—like its own reusable and autonomous Talon-A. That craft is still more than year away from flying, but once it’s ready, Stratolaunch hopes to use the Roc to launch Talon-A, too. Stay tuned.