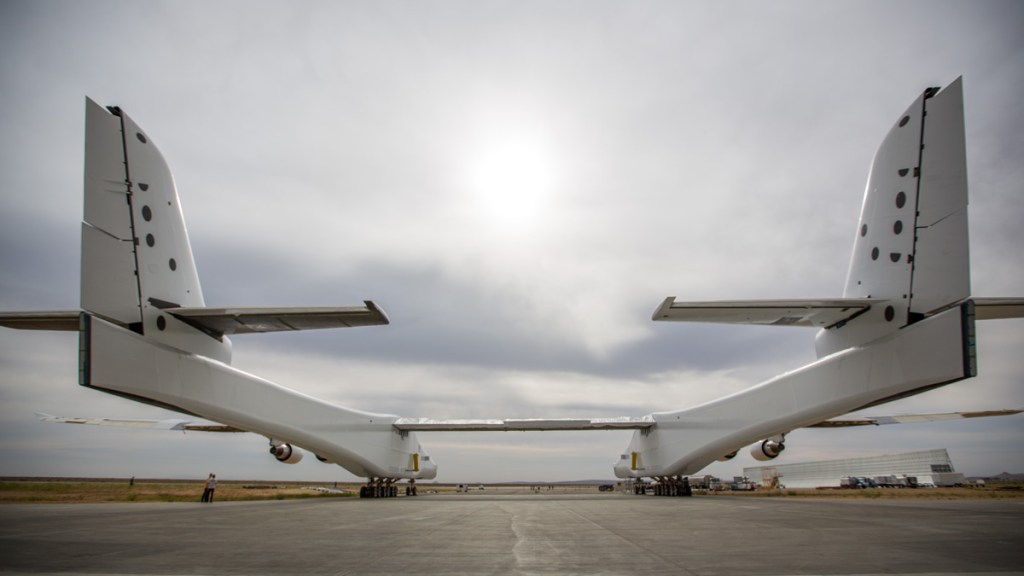 The Stratolaunch aircraft, an ambitious project backed by Microsoft co-founder Paul G. Allen, rolled out of the hangar for the first time on Wednesday, giving the public a first look at the massive airplane. The one-of-a-kind aircraft is designed to carry satellite payloads to about 30,000 feet, where they can be launched into low Earth orbit. It’s been under construction for several years at the Mojave Air and Space Port in Mojave, California.

The Stratolaunch is the world’s largest aircraft by wingspan, measuring 385 feet from wingtip to wingtip—longer than a football field. It’s the largest all-composite aircraft ever built. The aircraft stretches 238 feet from nose to tail, and the top of the tail stands 50 feet above the ground. It weighs about 500,000 pounds and is powered by six turbofan engines repurposed from Boeing 747 airliners. It’s designed to carry payloads up to about 550,000 pounds, the company says. The right fuselage holds the cockpit and flight crew, while the left fuselage is filled with flight data systems.

Stratolaunch has partnered with aerospace manufacturer Orbital ATK, which will provide Pegasus XL air-launch rockets for the initial flights. Up to three of the Pegasus vehicles will be carried aloft to high altitudes by Stratolaunch, where they will be released, and then the Pegasus vehicles will each launch a small satellite, weighing up to 1,000 pounds, into low Earth orbit.  The company says its goal is to make access to orbit more “convenient, reliable, and routine,” potentially driving advancements in science, research, and technology. Over time, the company says, it plans to offer “a broad spectrum” of launch vehicles to provide flexibility to customers.

Allen founded Stratolaunch Systems in 2011, and teamed up with Scaled Composites, the company founded by legendary aircraft designer Burt Rutan, to build the Stratolaunch carrier plane. Now that the huge aircraft has rolled out of the hangar, the company plans to begin fueling tests. Next will come ground testing, then finally flight tests. The aircraft is on track to fly its first launch demonstration as soon as 2019, the company says.