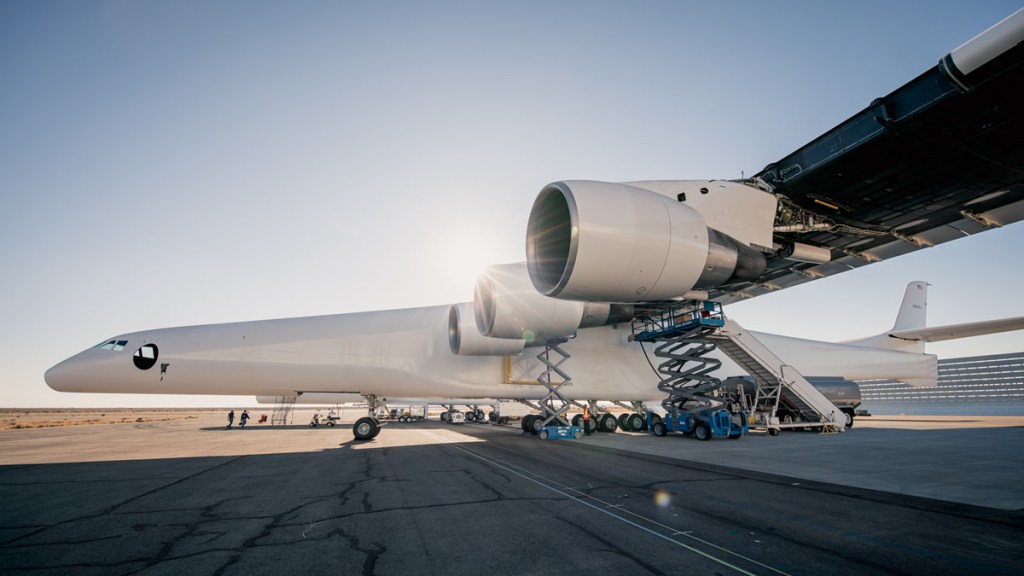 Stratolaunch, which is on track to be the world’s largest airplane, with a wingspan of 385 feet, has completed its first phase of engine testing, the company has announced. This puts the aircraft “one step closer to providing convenient, reliable, and routine access to low Earth orbit,” the company said. All six of the aircraft’s second-hand Pratt & Whitney turbofan engines, which previously powered Boeing 747s, were started up and tested.

The engineering team has checked the fuel system, confirming that all six of the airplane’s fuel tanks operate properly. They also have started work on testing the flight-control system. They will continue testing the engines, using more power and a variety of configurations, until they’re ready for taxi tests, which are expected to start by the end of the year. First flight is expected in 2019, and the airplane should start operations by 2020.

Most satellites currently are launched into orbit aboard rockets, which are expensive to build and operate, and usually are not reusable. Elon Musk’s SpaceX company has been working to salvage its rockets, and re-used a rocket for the first time earlier this year. The Falcon 9 rocket delivered a communications satellite to orbit, then landed on a SpaceX drone ship in the Atlantic Ocean.

Stratolaunch will make satellite launches even simpler, taking off and landing from runways. The airplane will carry satellite payloads up to about 30,000 feet, where they can be rapidly deployed into low Earth orbit. With a payload capacity of more than 500,000 pounds and an operational range of about 2,300 miles, Stratolaunch also can deliver multiple payloads to multiple orbits in a single mission.

The aircraft is intended to serve both commercial applications and national security needs. It’s been under construction for several years at the Mojave Air and Space Port in Mojave, California. The project is financed by Microsoft co-founder Paul G. Allen.