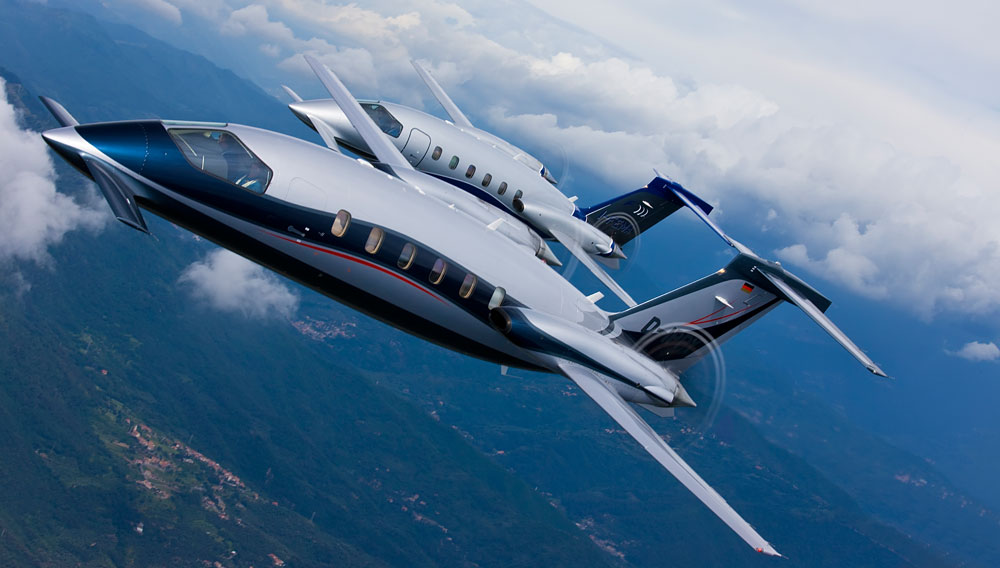 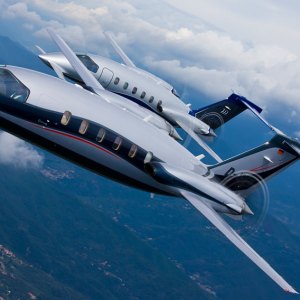 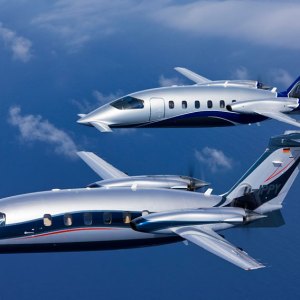 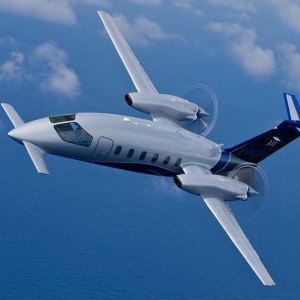 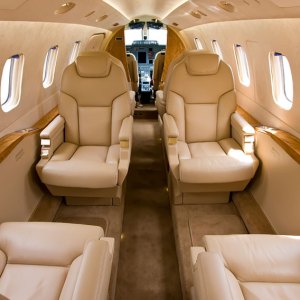 On a recent sunny spring day in Los Angeles, I flew aboard one of the industry’s most innovative new aircraft, the P.180 Avanti II from Italian manufacturer Piaggio Aero, departing from Elite Aviation FBO (fixed-base operator) at Van Nuys Airport. The twin-engine turboprop, priced at roughly $7.5 million, is strikingly different in appearance to its counterparts. Most immediately noticeable is its small forward wing at the nose, the rounded fuselage, and the rear-facing propellers, but each design component serves a specific purpose in improving the aircraft’s performance and passenger experience.

“Three hours in a [Beechcraft] King Air and three hours in this is a whole different deal,” says Grant Spigener, Piaggio America’s chief demonstration pilot, of the low passenger fatigue that the Avanti II’s quiet and comfortable operation provides. Spigener has been with the company for four and a half years and has logged about 2,000 flight hours in an Avanti II. He says that at a cruising altitude of 37,000 feet, occupants of the Avanti II will never feel as though they are at an altitude greater than 6,400 feet. In addition, the aircraft’s rear-facing turboprops are located 8 feet behind the farthest-aft passenger seat and they direct engine noise backward, ensuring a calm and quiet ride for as many as nine passengers. The Avanti II’s cabin, which is 5 feet 9 inches tall and over 6 feet wide—making it comparable to many midsize and super-midsize jets, including the Dassault Falcon 50—seats up to seven passengers, with the copilot seat and the belted lavatory providing two additional seats.

To help counter the forward downward force caused by the extraordinarily aft engines, the nose-mounted wing increases lift while providing stability and reducing drag. The aircraft also features a top-edge fuselage design that curves all the way from the nose to the tail to further improve the plane’s aerodynamics. These design elements provide the Avanti II with one of the industry’s lowest fuel-burn ratings. Even with today’s rising cost of fuel, the Avanti II’s direct operating cost is only $1,200 per flight hour; it burns just 100 gallons of fuel per hour. According to Piaggio, the Avanti II is 40 percent more efficient than any comparably sized jet and, with the same Pratt & Whitney Canada PT6A-66 engines as the Beechcraft King Air B200, the Avanti II is more than 100 knots faster than that King Air model. And with a maximum range of about 1,700 miles and takeoff and landing distances shorter than 3,300 feet, the Avanti II is the perfect aircraft for regional travel and getting in and out of virtually any airport.

After landing back at Elite Aviation, I am quite convinced of the Avanti II’s prowess. Travelers looking to try out this impressive plane before making the financial commitment of whole-aircraft acquisition will be glad to know that Clearwater, Fla.–based Avantair (www.avantair.com) offers various fractional-ownership options for the Avanti II.

Also, Angelenos, frequent L.A. travelers, and those seeking jet charter, sales, acquisition, and management services may be interested to know that Elite Aviation recently launched its Attaché program (www.eliteaviation.com), which offers clients access to a concierge able to arrange everything from hard-to-get restaurant and hotel reservations, to shopping sprees in New York or Paris, or even exclusive access to events like the Grammys and Oscars. (www.piaggioaero.com)