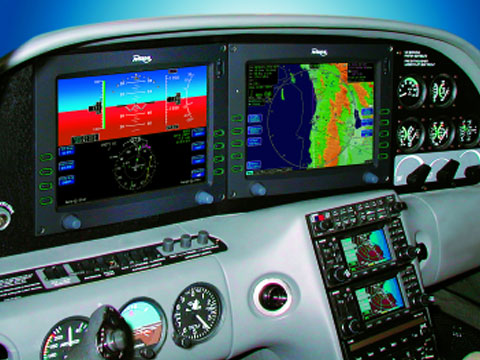 The single finest feature on the $289,400 Cirrus SR22 is one that Cirrus Design hopes its owners will never have to employ. The four-seat plane is equipped with the unique Cirrus Airframe Parachute System (CAPS), which, as its name indicates, houses a parachute for the aircraft itself.

Cirrus encourages its owners to use CAPS in emergency situations only. The system can be activated by pulling a red emergency lever located in the roof panel of the SR22’s cabin. The parachute is deployed from a compartment below the rear window of the aircraft, while straps simultaneously emerge from under the fuselage. The parachute arrests the aircraft’s forward flight, and the SR22 glides to the ground, wheels first. Last October, a pilot employed CAPS when his SR22 lost a wing flap, and the plane crash-landed safely.

“The thing that’s made us so popular is a clear focus on safety first,” says John Bingham, Cirrus’ vice president of sales. “The SR22 offers cutting-edge technology that many of our rivals would love to achieve.”

In addition to the CAPS system, the company bestowed the SR22 with plenty of performance capabilities, cockpit technology, and cabin comfort. A 310-hp engine enables the SR22 to climb at 1,400 feet per minute, and the aircraft, which has a range of more than 1,000 miles, cruises at 208 mph.

The interior feels roomy, thanks to Cirrus’ placement of the side-yoke control. Yokes are usually located in the space directly in front of the pilot, but Cirrus’ placement of the yoke on the left-hand side of the instrument panel permits much-needed leg-stretching during long flights. For the exterior, pilots can order custom paint schemes to personalize their planes.

The purchase price for the piston-powered single includes 20 hours of training from Cirrus pilots. Ideally, such preparation will prevent the SR22’s trademark safety device from ever being needed. “The company’s focus on engineering and safety appealed to me a great deal,” says David Bushman, an SR22 owner and a 26-year private pilot from Annapolis, Md. “They continue to offer new technology, like the anti-ice system and the Primary Flight Display, and that cinched it for me.”