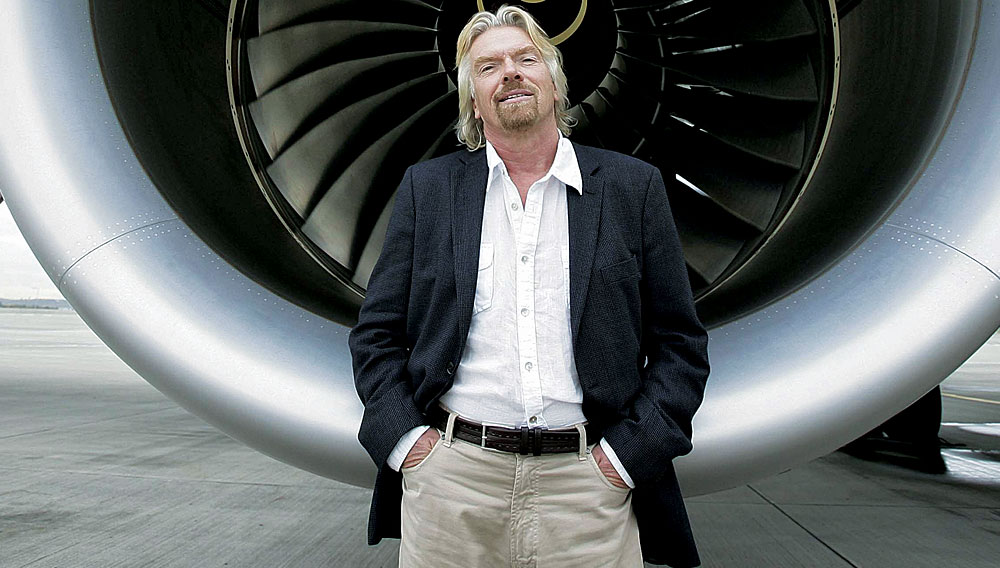 Sir Richard Branson is no stranger to the concepts of bigger, faster, and first. In 1986, the Virgin Group founder broke the speedboat record for crossing the Atlantic Ocean. A year later, he and the Swedish aviator Per Lindstrand completed the first hot-air-balloon trip across the Atlantic. Then, in 1991, the duo covered 6,700 miles in a 2.6-million-cubic-foot balloon over the Pacific at speeds up to 245 mph, again breaking the distance record for that mode of transport. And in 1998, Branson and Lindstrand, with the late adventurer Steve Fossett, tried to circumnavigate the world in a balloon. (They made it from Morocco to Hawaii before bad weather ended the trip.) This December, Branson plans to launch the first commercial rocket into outer space, through his firm Virgin Galactic. “Space will be the ultimate adventure,” says the 59-year-old Branson. “In my lifetime or my children’s, I’d like to have a Virgin hotel in space. That could take a while—but I like to dream.”

What is the most difficult situation you have encountered in your adventures?

I’ve had moments like when I was crossing the Pacific in a balloon and we lost half the fuel and I was facing almost certain death. We had to stay awake for four days and fly right in the core of the jet stream, with winds of 350 mph. I was actually planning on landing in Los Angeles, but I missed it by 2,500 miles and ended up in the Arctic. But fortunately I ended up on ice and was rescued. So that was a rather harried four days.

Tell us about Virgin Galactic.

The mother ship is finished and flying. The spaceship, which holds six people, will be ready for testing later this year. And the port is being built in New Mexico. It’s all coming together very well. For the first flight, I’m going up with my family—my parents and my children. Basically, it’s designed to go up 50,000 feet. There, the spaceship detaches from the mother ship, ignites the rockets, and off it goes into space.

What can passengers expect in space?

The initial flights will be about 70 to 80 miles into space. In time, we’ll go into orbital flights. But in order to keep the price down around $200,000, it will be a three-hour experience initially. Up there, people will become astronauts. They will be able to experience weightlessness and marvel at Earth, which very few people have done from space. There will be giant windows with spectacular views back to Earth.

How will the astronauts prepare for a trip?

There will be a three-day training, with the space flight on day three. The g-force is not too bad—it’s only about 3.5 for about 30 seconds—so anybody who is half fit should be able to manage. My father’s going to be about 93 when he goes up with me. And James Lovelock, the environmentalist, has tickets, and he will be 92 when he goes. We’re also planning to get Stephen Hawking up there.

How do you spend your downtime?

I spend three-quarters of the year traveling and the other quarter on Necker Island. I used to call London home, but I now consider the island my primary residence. It’s a little jewel in the Caribbean where I have access to six beaches and a pristine reef—the third largest in the world. Just this morning, I swam with eagle rays. We’re getting ready to bring some submarines to the island, so we’ll be able to see whales, dolphins, rays, marlin, and tuna.

I like to keep fit generally by playing tennis or kite surfing or para-surfing. I like to do something physical rather than just pure workouts.

To be proud of what I do and have time to spend with friends and family. The fact that I’m approaching 60 years old doesn’t mean I want to take it easy. I still want to keep going and creating things until I drop.