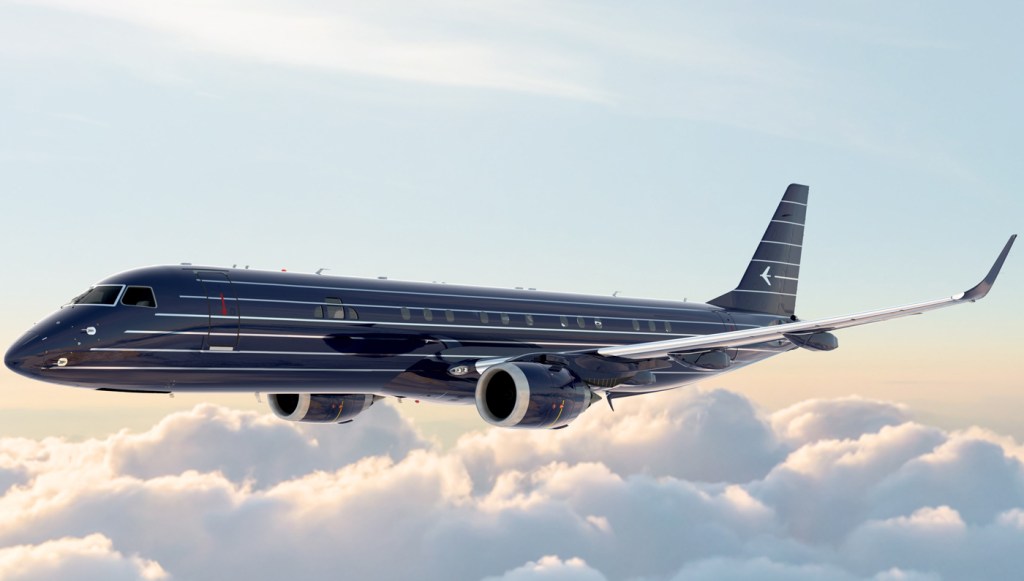 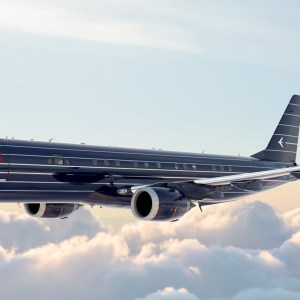 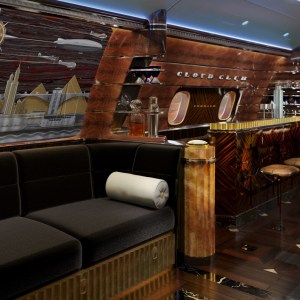 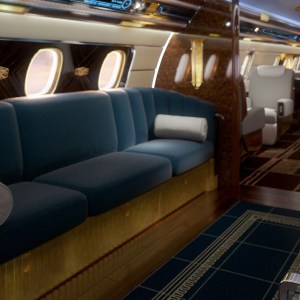 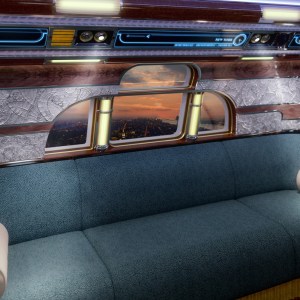 Private aviation may serve practical purposes, but Embraer’s designers want to ensure that flying on a business jet remains a singular experience. “We want to give people a reason to get dressed up to get on the plane,” says Jay Beever, the company’s vice president of interior design. To that end, the company has created two new Art Deco–inspired interiors for its flagship Lineage 1000E business jet: the Manhattan Airship and the Hollywood Airship. Embraer collaborated on the projects with designer Eddie Sotto, as it did on the Skyacht One and Skyranch One cabins.

The Manhattan Airship features dark wood flooring and paneling, a metallic mural of the circa-1930s New York City skyline, and the Cloud Club—a lounge area that includes a bar with retractable bar stools, vintage sconces, and a mohair-and-lambskin divan under a city-loft-style window.

The Hollywood Airship interior features lighter and warmer colors than the Manhattan Airship, and chrome and marble accents throughout. Leather reliefs on the walls and headliners depict Howard Hughes’ Spruce Goose, the Sunset Tower, and vintage cars. Each design features large, stylistic windows that allow plenty of light into the cabin and offer wide views of what’s outside the aircraft.

Months before the official unveiling, Beever spoke with Robb Report about the new interiors and the inspirations behind them.

Business-jet interior design has long been dominated by simplicity and functionality. These two designs seem to go in another direction. What was the thinking behind this?

We wanted to move away from the casual. With both these designs we are bringing back a mindset of sophistication. And I think the world is ready to get back to this. You can say that they’re offering people an experience that surprises them, something they weren’t expecting.

What inspired the Manhattan Airship?

The idea was to capture the Art Deco designs of the Chrysler Building and the Empire State Building with a mosaic of the Manhattan skyline. The first three cabin zones contain a mosaic and mural of the industrial revolution worldwide. The second cabin has a bar area. Across that is a divan, and above that is a penthouse view of what’s outside. It’s like something that Jean-Michel Frank would have designed when he lived in New York.

Is there any evidence that people want more of this kind of high-concept design?

My observation is that the pace has picked up in interior design. In a way, we have been victims of our own success. We put out the Skyacht One and then the Kyoto Airship, which had oversized windows and skylights instead of larger flat screens. I’m a firm believer that LCD screens have their place, but instead of bringing bigger screens, why don’t we have bigger windows? Why not see what you can do with that? We have brought back bigger windows, and it’s taken the industry by storm. Both these designs play up our ability to use larger windows. If you chartered either of these aircraft, it wouldn’t feel like a charter plane. It would feel like a lounge and dining area that happens to be flying across the country. If you are in this aircraft, you have to take a selfie.

What are the technical considerations for having large windows in an aircraft?

You need a special type of glass that allows pressurization through such a large window. It’s a complex engineering issue, and the structural elements have to come together to make these elements work. We also use tinting technology on the inside of the windows so that we don’t need large shades, which would add more weight. (embraerexecutivejets.com)