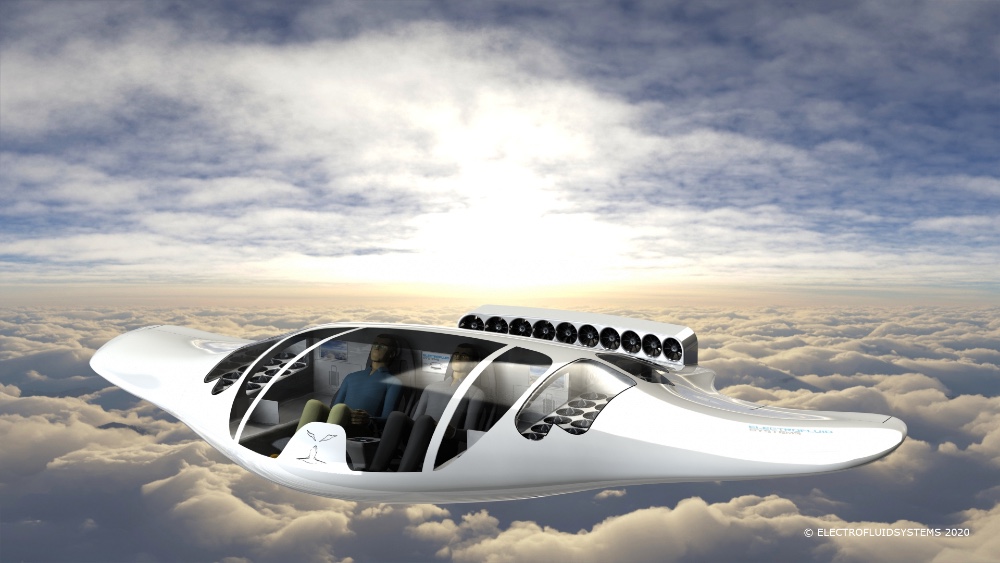 All Images Copyright of Electrofluid Systems

Emerging aircraft design has been focused on the electric vertical takeoff and landing (eVTOL) segment. Using electric engines powered by batteries, the aircraft are quiet and maneuverable, with the ability to take off and land from anywhere. Their Achilles heel is limited battery capacity. Most have a limited range and operating time, so the eVTOL is being developed for the urban air-taxi market. While advances in battery technology are ongoing, breakthroughs tend to be incremental rather than revolutionary.

Electrofluidsystems recently revealed its hybrid eVTOL concept, the H2PlasmaRay, which uses both LiPo batteries and hydrogen fuel cells as power. The hydrogen power gives the stingray-shaped aircraft a much longer range than other eVTOL competitors.

“The use of liquid hydrogen is the real breakthrough here,” Berkant Göksel, company founder, told Robb Report. “Our first version will have a speed of approximately 155 mph and range of about 625 miles. That translates to a one-way trip between Berlin and London. We expect the next generation to reach about 190 mph, with a range of about 800 miles.”

The H2PlasmaRay has seating for two. Initially, it will be powered by hydrogen fuel cells, but the company also intends to make an all-electric version for urban taxi and drone networks.

The company used the stingray shape—or in aeronautical design parlance, a blended-wing body—because it reduces drag and increases range. Plus, it looks cool. Think of the way birds fly in a V shape to use less energy and you get the idea. The company plans to use drone swarm technology to take advantage of that V-formation flight.

The H2PlasmaRay has a wingspan of about 22 feet. It is a two-passenger aircraft with a maximum takeoff weight of about 2000 lbs. The design includes 48 electric ducted fans with 8-inch diameters. Thirty-eight are for vertical takeoff and landing, while the remaining 10 are for forward flight.

The aircraft has a wing span of 22 feet, with 48 engines. Thirty-eight are for vertical takeoff and landing  and the other ten for forward flight.

The distributed electric propulsion (DEP) allows the aircraft to have multiple electric ducted fans anywhere on the fuselage and wings. DEP’s other advantages include much better control of the aircraft and, of course, safety: If several of the electric fans stop, the remaining  fans would be able to land the aircraft. Göksel says the H2PlasmaRay also has retractable landing gear and a ballistic parachute for system failures.