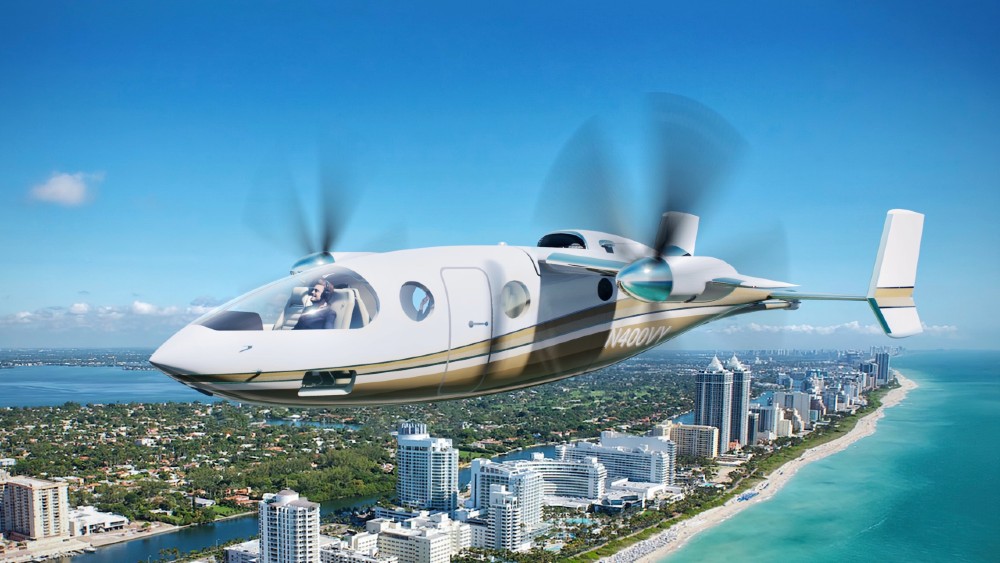 While the whole world rushes to go electric—especially the vertical, short-range aviation world—the team at Transcend Air is doubling down on good, old-fashioned (i.e., proven) turbine propulsion. They pumped up the horsepower on the latest iteration of the Vy 400R VTOL they introduced in spring of 2020 and the benefits go beyond producing more speed.

When we first met the Vy 400R, it had a 1,700 hp Pratt & Whitney PT6, which gave it a projected top speed of 400 mph and a range of 450 miles with four passengers. In the time since, co-founders Gregroy Bruell and Peter Schmidt made the switch to the 2,500 hp GE CT7-8. “I’m originally a car guy,” says Bruell, “so it always comes back to horsepower.”

The new powerplant gooses the projections to 410 mph with a 500-mile range with four passengers, which solidifies the vehicle’s unique place in the market between established helicopter offerings (which are slower and more expensive) and the emerging eVTOL category (which can’t match the speed and range combination). Opt for the “super-light” seats and the Vy 400 can carry more fuel, allowing it to fly 610 miles. Better still, GE is developing a 3,000 hp version of the same engine. “When that becomes available in a few years,” says Schmidt, “it’ll bolt right in,” pushing the top end to 500 mph with a 625-mile range.

Just as important, the extra power allowed for other changes that improve flight quality. Where the original had three-bladed propellers mounted at the ends of the wings, the new engine accommodates five-bladed screws positioned closer to the body on shorter, stiffer and lighter wings. Altogether, those changes will lead to a quieter ride with less vibration. A larger tail fan also cuts noise and helps keep the Vy 400 level throughout the flight cycle.

In order to accommodate the wing’s new structure, the tilt mechanism has been redesigned with double-actuator arms that secure it at four points and also cut off another potential avenue of vibration.

To answer the environmental advantage of electric, Transcend struck up a partnership with Prometheus Fuels, which will supply its net-carbon neutral SAF to Transcend’s commercial network of city-to-city flights.

Another partner, the Huslig Collective, will offer bespoke completions and two brand-new spec designs have been released along with news about the engine and aerodynamic changes. “Owners can complete the Vy however they want,” say Schmidt, “but this gives them an option to customize using a company that knows the craft inside and out.”

Depending on how those options play out, Transcend estimates a Vy 400R will come in at somewhere between $4.6 to $6 million. The company hopes to achieve certification by 2025.