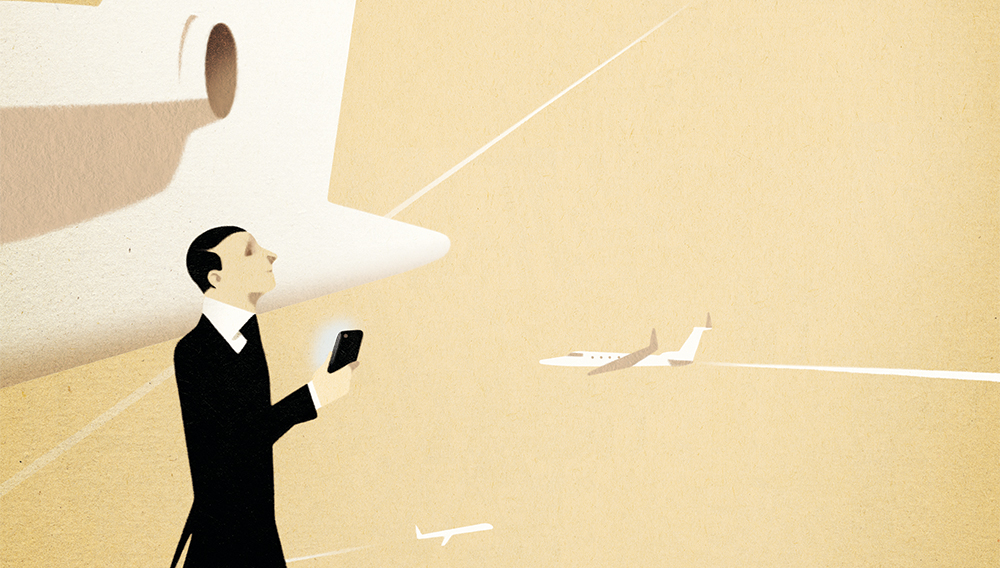 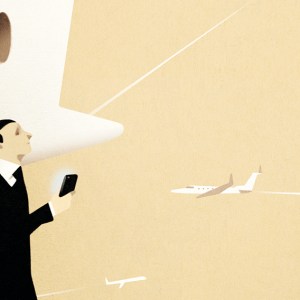 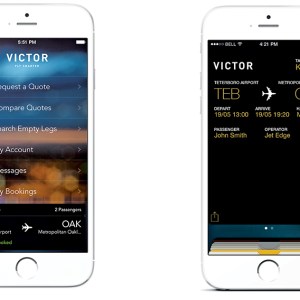 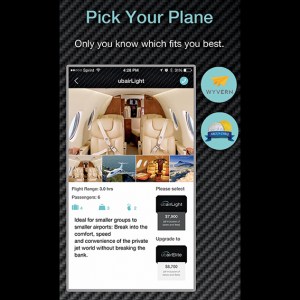 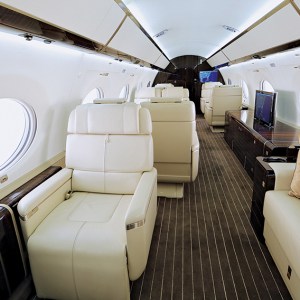 At an aviation conference in 2007, PrivateFly founder Adam Twidell made a presentation in which he introduced his idea for an online portal for booking charter flights directly. It would allow customers to choose jets from multiple charter companies, giving them much more choice than any single company could provide. Customers would be able to select the specific jets they were interested in flying and compare the prices online.

Halfway through the presentation, Twidell was shouted down by an angry aviation executive. He asserted that Twidell did not understand the luxury industry and that no one would ever book a private jet over the Internet.

The executive had a point. Most private-aviation clients are over 40, and eight years ago many people in that age group were not yet accustomed to making large purchases online. Nevertheless, Twidell, a former Royal Air Force pilot, and his wife, Carol Cork, sold their home and exhausted their life savings to finance PrivateFly.

They struggled at first to get charter companies on board and to attract clients. Around this time, Apple introduced the iPhone marketing slogan “There’s an app for that.” Twidell saw it and thought, why not design a smartphone app that would be a companion for his company’s service? The initial PrivateFly app was simple. It enabled users to locate the nearest airport and to view their charter reservations. “The philosophy was, ‘Well, this app is just a great marketing tool,’ ” says Twidell.

Now PrivateFly receives more than 200,000 unique visitors to its website every month, and many of its clients first contact the company through the smartphone and tablet app, which has been upgraded so that travelers can book a jet through it. The app will also find the nearest airport and help in choosing an aircraft that can land on that airfield. On the way to the tarmac, a user can contact the pilot through the app and discuss the itinerary.

PrivateFly is one of several companies with aircraft-chartering apps. These companies include JetSmarter, which charges a membership fee of $8,999 for access to its network of private planes and deeply discounted empty-leg flights. Victor and Ubair charge no fee and serve more as clearinghouses for the locations, flight schedules, availability, and prices of thousands of jets available for charter. All of these apps are designed to make chartering easier and more accessible. They also offer the ability to price any flight at any time, making pricing more transparent for jet owners and charter companies as well as passengers. This accessibility and transparency could change the charter business for everyone.

Twidell says these apps have an “eBay effect” on charter flights. Because you can use them to select an individual jet and can see what several operators charge for similar jets on similar routes, they can drive down prices. “PrivateFly is used by operators as a pricing benchmark,” he says. “If they have a new type of aircraft, they contact us and see what kind of pricing is appropriate. It stops operators from inflating their prices.”

Lower charter prices means a larger market, says Sergey Petrossov, the founder of JetSmarter, which has more than 3,000 aircraft in its network. “Traditionally, the jet market is smaller than the 1 percent; it’s the .1 percent,” he says. “We have expanded that market by 20 to

Justin Sullivan, the founder and CEO of Ubair, agrees that apps like his company’s make chartering available to people who otherwise would never have considered it. Now they can easily compare prices, and they can find available aircraft in any region of the country. “They can take a commercial flight from JFK to Denver, then book a turboprop to go from Denver to Aspen. They are using it surgically to make smart decisions about when and where to fly privately,” says Sullivan. He notes that one presidential campaign is using his service extensively.

Aircraft owners and fractional-share owners also can find these apps useful. “There are absolutely times when it’s more effective not to use fractional jet hours and instead fly out and back with an on-demand service,” says Clive Jackson, the CEO of Victor, a company with 28,000 registered users that books 150 flights per month in Europe and the United States. Through its app, the company provides the prices quoted from the charter operators for each aircraft. This enables a traveler to compare costs. Victor charges a flat fee based on the net price of each charter booked through the app or website. The fee is set at a maximum of 10 percent and is always disclosed. “Our customers can price the flight through us and then go around the corner and book it through the operator directly, but they don’t,” says Jackson.

Once the booking is confirmed, Victor sends an itinerary that appears on the user’s smartphone Passbook app. The itinerary can be amended to add passengers, and it can be forwarded to guest passengers.

Although the companies claim that you can use the apps to book a flight instantly, most bookings come with a slight delay. After all, a jet charter will cost tens of thousands of dollars, and payment has to be secured through a separate process. With some apps, the booking request is sent to a central office, where it is processed the same way it would be if you had used the phone or an online form to book the flight. Someone physically confirms the details and gets back to you. JetSmarter operates differently. “Ours is the only true online transaction. Our service takes one minute to book your travel, and you are done,” says Petrossov. “We appeal to people who have used an online portal to fill out a form and then had to wait for a call back.”

Some of these companies are trying to change the nature of charter by selling individual seats on empty-leg flights at prices discounted deeply enough to compete with those of first-class commercial air travel. A coast-to-coast flight on a charter jet can cost $30,000 to $50,000, but if 10 passengers buy individual seats, then each can fly at a rate that is discounted 90 percent. “You are flying with strangers, sure, but you are still going to a private aviation field. You are still driving onto the tarmac to board,” says BlackJet CEO Dean Rotchin.

BlackJet’s members pay a $5,000 fee for an account on the com­pany’s app, which provides access to seats on jets traveling between New York, Los Angeles, Las Vegas, South Florida, San Francisco, and the Hamptons. Travelers usually have to reserve at least two days in advance, and they do not know the tail number of the aircraft or even what kind of plane they will be traveling on until the day before the flight. This is because BlackJet books the plane based on the number of people who have signed up for the flight.

Rotchin says passengers generally do not care what type of plane they are flying on, as long it has comfortable seats and an enclosed lav. Also, BlackJet fills only the comfortable seats; no one sits on a divan or on the lav seat, he says. And no one seems to mind sharing a flight with strangers. “They are flying with people who have paid $5,000 for a membership, and that puts them in a certain class,” he says. “They do want privacy. They do want to work, but they can also become friends.”

JetSmarter also offers per-seat bookings—for free to its members on its new JetShuttle Service, which just launched with flights from New York to Miami, Los Angeles to San Francisco, and Los Angeles to Las Vegas. These seats can be reserved up to two weeks in advance.

Victor, PrivateFly, and Ubair do not charge membership fees or offer individual seats on planes. “We feel that in this day you shouldn’t charge an upfront fee for membership, because you are asking people to pay before they know what the value of the service is, and because you are living off of someone else’s money, and frankly that sucks,” says Victor’s Jackson.

In the past few years, the Federal Aviation Administration has shut down several companies that offered per-seat charters, calling them illegal. Those that remain, including JetSmarter and BlackJet, have agreements with the Department of Transportation that ensure all the aircraft they book comply with the FAA’s Part 135, the regulations that require extra safety measures for commercial flights. “For our one-way flights on a per-seat basis, JetSmarter is a licensed public charter operator,” says Petrossov, noting also that the aircraft meet the maintenance, safety, and insurance standards needed to receive a Wyvern or ARGUS certification. “We have a license from the DOT to offer these per-seat services.”

According to Rotchin, BlackJet operates within the law because it is never looking to fill seats on an existing flight. The company books the flight—with an ARGUS platinum- or gold-rated charter operator—after clients have reserved seats. “We work with the DOT to make sure we are complying with the letter and the spirit of the law,” he says. “It’s completely kosher.”

Though companies are still experimenting to determine the best model for making charter flights more accessible and convenient for a new generation of travelers, the apps they offer have the power to disrupt the charter industry in a way that will expand it and benefit charter customers. “It’s good to see so many new apps out there,” says Twidell. “It’s great to have competition, because so many people are now booking jets online.”