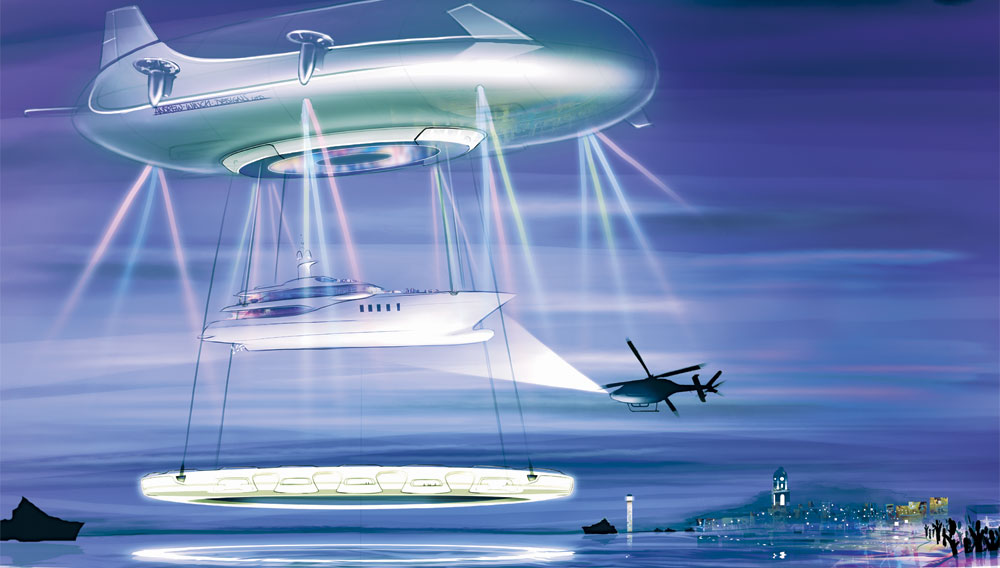 Although the Aeroscraft airship was designed to revolutionize long-range cargo transport, its remarkable capabilities excite the imagination well beyond such practical applications. Designed and built by the Aeros Corp. of Montebello, Calif., the Aeroscraftis longer than two football fields and about as tall as an 18-story building. Its cargo area is more than 1 million cubic feet, and it can transport as much as 250 tons (compared to about 150 tons for an Airbus A380, the world’s largest jetliner).

For this gift, the designers at London’s Andrew Winch Designs (which specializes in private aircraft, megayachts, and interiors) have conceived a version of the colossal craft that would serve as an incomparable private residence.

“We’re talking about something four times as large as even a big superyacht,” says Jim Dixon, head of aviation projects at Andrew Winch Designs. He notes that the living area would have floor space totaling more than 43,000 square feet—just shy of 1 acre. By comparison, the 285-foot-long motor yacht Ace, launched by Lürssen in 2012 and designed inside and out by Andrew Winch Designs, has 10,000 square feet of living area. With so much space, the flying home could include a wraparound walkway, as many as 20 suites and bedrooms, multiple grand saloons and dining rooms, work and conference spaces, a spa, a cinema, a ballroom, and more.

All of these features and rooms would be contained in a two-level, ring-shaped living area—a “halo” is what Dixon calls it—that surrounds the cargo bay. The cargo bay would be spacious enough to accommodate a megayacht as large as about 180 feet (depending on its weight) and a helicopter. Or it could hold several smaller watercraft or a fleet of cars.

The halo and the vehicles in the cargo bay could be lowered (and raised) from the airship onto water or land with a system of motorized cables. The Aeroscraft’s inflatable landing pads allow it to land and remain stationary on just about any terrain or even water. The halo, which would be buoyant like a yacht, would feature transparent floor sections—like those on the viewing stations at the Grand Canyon and atop Chicago’s Willis (formerly Sears) Tower—so that when it was lowered onto the water, the residents and their guests would have incredible views of the sea life underfoot.

With a flight ceiling of 12,000 feet, the Aeroscraft does not need to be pressurized. And because the craft can fly as low as local airspace restrictions allow, the design for this gift includes open-air observation terraces along the perimeter of the halo. “This vessel will provide a completely new perspective on the world,” says Dixon. “You could fly directly over cities or mountaintops, to largely uncharted territories of the oceans, or to the North and South Poles—all with unrivaled views.”

The Aeroscraft has a rigid internal structure containing Aeros’s patent-pending ballast system, which uses a series of internal compressed-helium envelopes to make the craft heavier than air for grounding and lighter than air for flight. This design allows the aircraft to hover in place, and its rotating motors enable vertical takeoff and landing. The motors are positioned far enough from the cockpit and what would be the living area that passengers would not hear any noise from them.

Aeros says that the vessel is about eight times as fuel efficient as a large jet and has a range of nearly 6,000 miles and a cruise speed of 130 mph. The version for this gift would include lightweight composites for the frame, structure, and outer skin; honeycomb-cored glass for the windows and floors; carbon-fiber furnishings; and the latest touchscreen and mobile technology for the cockpit and living spaces.

A 266-foot-long prototype of the Aeroscraft first flew in August 2013 and received certification from the FAA. (The gift version would be subject to the necessary certification processes.) Two months later, the warehouse containing the prototype collapsed, essentially destroying the airship. But the company is currently building two Aeroscraft for commercial use, a 66-ton version and a 250-ton version.

The Andrew Winch Designs version of the Aeroscraft will take at least 10 years to deliver. The salaries of pilots and crewmembers, hangar space, and supplementary vehicles (including a megayacht) are not included in the price of the gift.