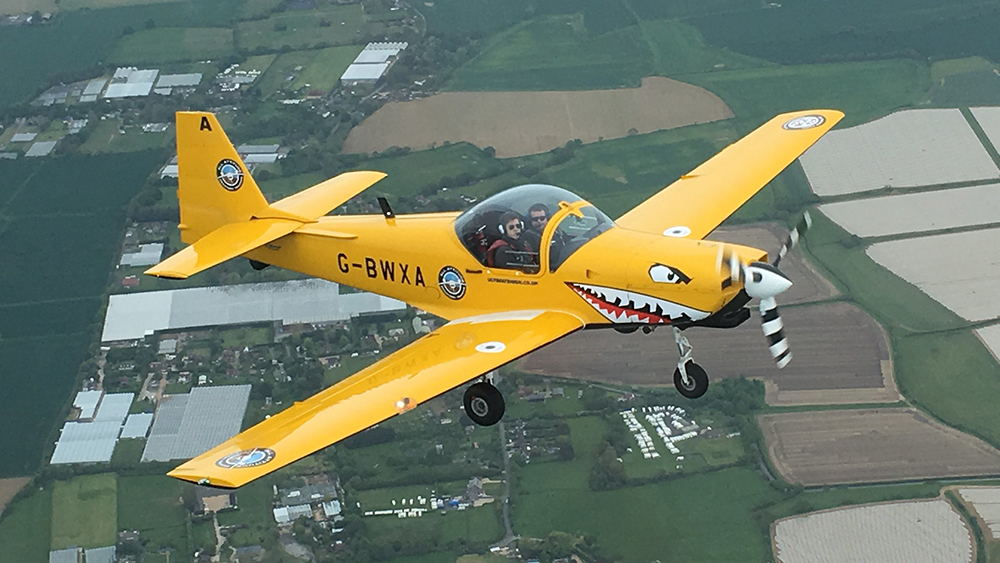 The plane flicks viciously onto its back. Suddenly, I’m staring straight over the nose of the little two-seat aircraft at waves that are zooming closer at an alarming rate. “Recover now,” says flight instructor Mark “Greeners” Greenfield in a voice that’s absurdly calm, considering we are seconds from punching through the rippled surface of the English Channel.

I defy my instinct to haul back on the controls and instead push the nose down even further toward the water. That’s enough to get the stalled wings flying again, allowing me to roll them parallel to the horizon, quickly reduce power and then lift the nose of the Slingsby aerobatic plane up into the cloud-dotted sky, increasing thrust along the way.

Greenfield is teaching me how to save a plane when all goes wrong—which can easily happen if turbulence, mechanical failure or distraction lead a pilot to wing it. Unfortunately, the demand for airline and corporate aviators has fast-forwarded instruction, defense cuts have slashed the number of seasoned ex-military fliers going into commercial operations and the rise in aircraft automation has curbed opportunities to practice hand-flying skills. All of these factors add up to a potential drop in piloting standards.

Regulators are all too aware of this. “Increasingly, you’re seeing pilots who haven’t got a background for building skills in gliders or small planes—skills that tend to make better pilots with more awareness of aerodynamic forces,” says a source from the UK’s Civil Aviation Authority who wants to remain anonymous. Greenfield, a former UK military flier who also headed Britain’s Empire Test Pilot School, now runs the UK-based Ultimate High Academy. He has been giving hands-on upset prevention and recovery training (UPRT) to pilots for two decades.

Greenfield also helped frame new European aviation regulatory rules that came into effect in late 2019. These were drafted in response to accidents in which the pilots lost control of perfectly airworthy planes. The updated regs require that newly minted commercial pilots receive UPRT, in real aircraft, before they go into their first corporate or airline job. The situation is different here in the US, where commercial pilots licensed by the Federal Aviation Administration need a modified version of UPRT, sometimes just on a simulator.

“Sims are wonderful for training in the normal flight envelope,” says Randall Brooks of US-based Aviation Performance Solutions. “But even a full-motion sim is not like being in a plane, and there’s less pressure to learn because everyone knows they’re not going to die. When they leave the normal envelope, some things they have been trained to do will be more dangerous.”

The course at Ultimate High Academy includes three to four hours in the air and practice of the one rule that, according to Greenfield, can solve any problem. That rule, said out loud while performing the actions, is push, roll, power: Push the control stick forward to get the wings flying again, roll level and use power as necessary. Usually, if the aircraft is out of control because its wings have stalled, adding power helps.

While accident statistics, in general, are trending for the better, Brooks notes that rates in corporate aviation are not as good as those for airlines. One reason may be that commercial pilots have more experience and more regular continuing education than some of those operating in the charter and corporate sectors. That said, some larger private-flight departments are now sending their aircrews through UPRT as well.

After my own skill-sharpening session, I’m convinced that such specialized aerial courses save lives. Unfortunately, there is no requirement for already licensed business-jet pilots to take the courses. Hopefully, it doesn’t take another tragic headline to make such training mandatory.